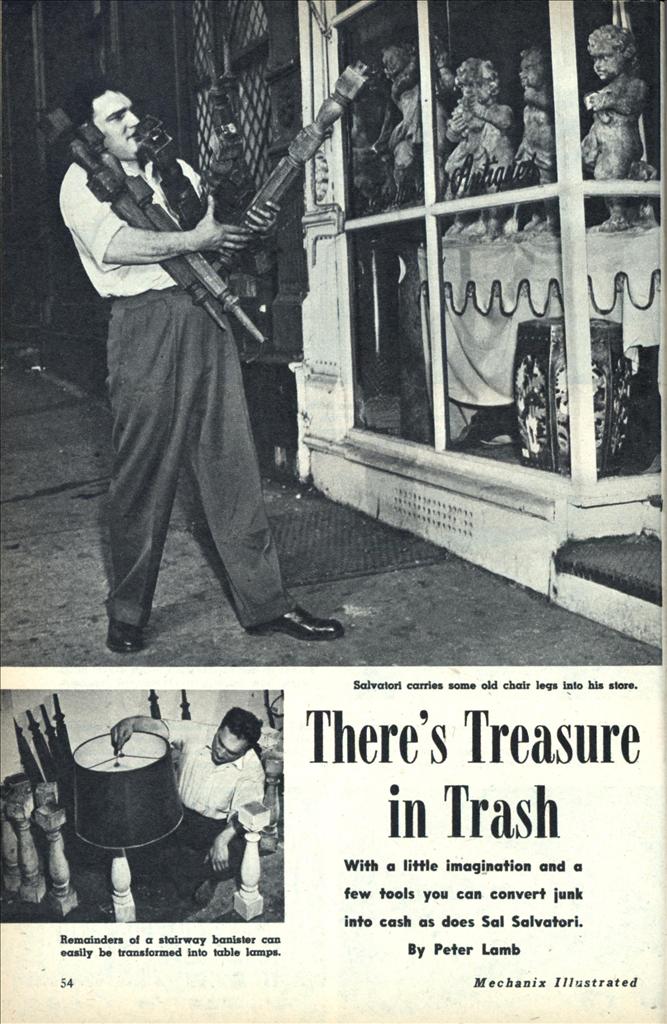 With a little imagination and a few tools you can convert junk into cash as does Sal Salvatori. By Peter Lamb IF there’s a workshop in your home and you fancy yourself a fairly commendable woodworker, you may be missing an opportunity to cash in on your hobby as many other workshoppers are doing. Some turn out original designs; others make furniture to order. But one of the most successful fields is the conversion of discarded items into useful and ornamental pieces. Take the case of Salvatore Salvatori.

You’ve probably heard about the junkman who retired at sixty, a millionaire two times over. Well, Salvatore Salvatori isn’t a junkman in the usual sense of the word, nor is he a millionaire—yet. But he is a young man who has found a fortune in back alleys, junkyards, demolished apartment houses and even in the crowded streets neighboring his furniture shop on • New York City’s Second Avenue.

Salvatori’s philosophy is: “There’s no discarded piece of wood, metal or stone, however dilapidated, broken or scarred, that cannot be made into something useful and attractive if the right person with the right touch retrieves it from the trash heap of oblivion.”

Salvatori started with this idea in mind nine years ago, when he was only 20 years old. It was 1945, right after he had been discharged from the Navy. In his pocket he had $301 in cash, the sum total of his mustering-out pay. That $301—plus an idea, imagination and talent—were his only assets. At first they didn’t look like much but nine years later they’ve paid off to the tune of about $10,000 a year with a sky’s-the-limit ceiling on future earnings.

Prior to the war Salvatori’s business experience had been limited to his father’s lamp-shade factory. However it was there that he picked up the many skills that were later to set him on the road to success. On the job for his dad, he had not only learned the techniques of lamp and furniture design, carpentry, cabinet making, furniture refinishing, wood and metal working but at the same time he had made contact with several interior decorators. In the decorators’ field there has always been a crying need for cabinet makers and designers who could make furniture along traditional styles. In. ’45 the need was even more acute than usual. Salvatori quizzed his decorator friends and found that more than one could utilize his varied talents.

So when his father asked him to return to the lamp-shade business, the young man turned him down. He was going into business for himself—as a furniture manufacturer and designer.

In the furniture trade, however, $301 is hardly what one might call working capital. So the youth decided to launch the enterprise on a scale that was in keeping with his modest bankroll. He found himself a shop, previously occupied by a shoemaker, at 1014 Second Avenue, New York City. The rent was only $40 a month and the i location, although small, was smack in the middle of Manhattan’s district of antique and second-hand furniture stores. If his connections in the decorator’s field didn’t materialize in sales, he figured that the passing trade of his competitors would provide him with the necessary customers.

Stripping the store of its partitions, racks and booths down to the bare walls and floor, he started the decoration of his new establishment from scratch and by himself. His street window, a meager five ft. wide, was hardly large enough to catch the eye of the most alert customer so he painted it up in blazing colors and featured an ever-changing exotic display—sometimes a huge smoky mirror, or a cage full of Birds of Paradise. Just recently his exhibit included a white monkey in a white wrought iron cage. In contrast to the more jumbled and sedate displays of his competitors, Salvatori has always managed to maintain a window that literally jumps with activity.

With the rent paid, the location completely renovated, the tools of his trade bought and paid for, he began his tour of the streets of New York, picking up bits of discarded furniture, old lamp shades, broken marble, rusted wrought-iron gates—anything and everything that less imaginative people might have discarded as useless and beyond redemption. Then he set about contacting his interior decorator friends to whom he told the same thing he tells all his customers at the present day: “Just let me know what you want and how much you want to spend. I’ll fill the bill. It’ll be distinctive, original and inexpensive by comparison with other custom-made furniture.”

And that’s just what he’s been doing ever since. One decorator told another. One customer told a relative who told a friend. The first year the going was slow and he cleared less than $2,000. Today his annual income is more than five times that original figure.

A private party or decorator can come to him with an order for an original lamp. Salvatori will scour the supply of junk in his basement and come up with part of an old banister, the leg of a sagging carved chair, or even an upright from a wrecked four-poster bed. Whatever he chooses, he takes it down to the bare wood, sometimes preserving the original lines, sometimes reworking them to fit the customer’s specifications. To the finished product, painted, varnished, gilded or what-you-will, he might add a piece of marble, wood or metal for a base. He might make the shade out of a piece of fabric given him by the customer or he might start with an old frame, adding to it something else that he’s dug up from the trash “heap.

One of his favorite tricks is to collect awkward-looking hand-carved chairs. Absolutely useless to their original owners, Salvatori can pick them up for a song. The backs, when properly renovated, make remarkably majestic mirror frames.

Sometimes a customer will find that a mirror frame is too ornate for modern tastes. A little chipping here, a little chiseling there and Salvatori has removed the curse. Then in the event the customer doesn’t really want a mirror, the master craftsman will convert it into a decorative shadow box for milady’s knick-knacks.

Among his decorator friends, the items that enjoy the greatest continued popularity are his low-slung coffee tables. Sal’s favorite piece of junk for this kind of order is a rundown piano bench. Sawed down to the proper height with the hinged top removed and the wood sanded and gilded, the piece is ready for a distinctive top. Sometimes a pair of carved lions will provide a base instead of the original legs. Revamped with a mirror top, the oblong coffee table will cost about $150. Larger oblongs with special bases in Empire style, polished mahogany tops and brass fittings, will bring in the same figure. If this seems like a lot, you might window-shop Sal’s competitors. He undersells them by many, many dollars.

How does he do it?

The secret of his success appears to be three-fold. In the first place he’s a master craftsman who has learned his trade well. Secondly, his decorator customers insist he has imagination and a fine classic sense, can retool a piece of furniture in the traditional style of any given period. Thirdly, and very important in such a highly competitive field, his prices are moderate. Because he converts old furniture into new, his material costs are kept to a minimum. A seasoned piece of quality raw mahogany costs far more than a broken down, though complete, mahogany table that the untrained person lacking Salvatori’s skills might well disregard. Then, too, much of the very intricate carvings on some pieces that make them so expensive are already incorporated in that “hunk of junk” when he starts work on it.

To this date, Salvatori continues spreading his name on a word-of-mouth basis. He does not advertise, except for a listing in the tele- phone directory. And yet many famous people have beaten a path to his door. Numbered among his customers are such well-known personalities as Gene Tierney, Jack Oakie, Glenda Farrell and Brian Aherne.

For several years now he has been converting old tenement doors into fine reproductions of painted Venetian imports. Painted in streaked washed pinks, whites and blues, they are similar in color and design to doors that have been imported from Italy at prices up to $200. Salvatori can turn them out for one-fourth the cost of the originals, at the same time adding those distinctive tricks of design that make his work so unique. Any one of a dozen of these designs have been purchased several times over and he has an unlimited number of them down on paper that have not yet been utilized.

So popular are the doors right now that they form a major part of his business. On a one-to-a customer sale, he can handle all the orders alone. But just recently the builders of a thousand-unit housing development have approached him, requesting bids on the doors in 5,000 lots. Salvatori has never before turned out any of his work on a mass production basis but he feels that this is his golden opportunity to make that $301 investment pay its biggest dividends ever.

And all this from a pile of junk. •