It must have sucked to be a paparazzi in the days when a “candid” picture required a 14 second exposure. I love title “Wolf Pack” for that picture on page four. 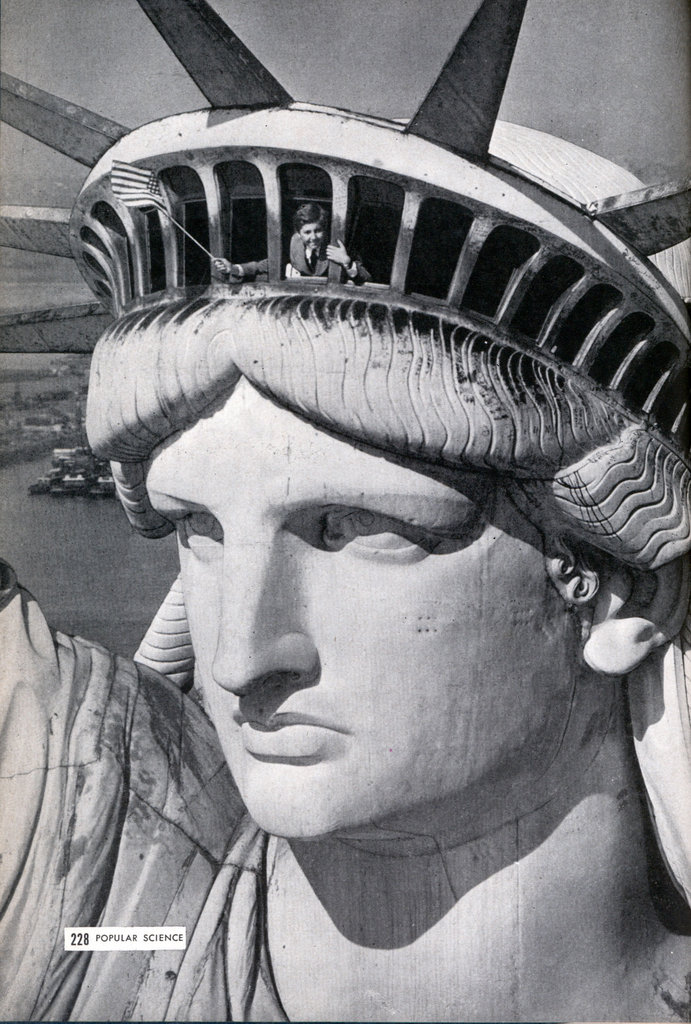 These Are Photos I’ll Always Remember

A veteran cameraman tells how he takes pictures that spice the headlines.

YOU may recall that sensational case in Ohio in the late ‘Twentiesâ€”the trial of Professor James Snook for the love-affair murder of Theora Hix, one of his students. I’ll never forget it, for I learned then that a photograph can sometimes perform a public service.

The trial got off to a slow start. It was a week before the first juror, a woman, finally was seated.

Next day, during the noon recess, the newspaper reporter I was working with called me aside. The woman juror, the reporter said, was lunching at the counter in the courthouse basementâ€”and chatting with one of the defense attorneys!

A good pictureâ€”one that any cameraman would give his shirt to take!

But how to get it? This was before the day of flash bulbs, and the judge had forbidden the use of flash powder anywhere in the court building. A time exposure was my only hope.

Covering the camera with my hat, I placed it on the counter opposite the juror and the lawyer. When the woman began to speak, I raised the hat and opened the shutter. Then I counted the seconds. As I reached 14, the attorney moved. I closed the shutter.

Even with a 14-second exposure, the negative was underexposed. But intensification brought it up so a print could be made. This was delivered to the state’s attorney.

As a result, the woman was excused from the jury. The judge announced that she and the attorney had been neighbors during childhood, but had not recognized each other during the preliminary questioning.

This friendship, if discovered later, could have caused a mistrialâ€”after a lot of the state’s money had been spent.

Such lucky breaks in getting pictures don’t come often. To get good news photos, you can’t depend on luck.

Take Brenda Frazier’s debut, for example. For nearly two years she had been publicized as the “glamour deb.” Then, it was announced that no photographers would be permitted at her coming-out party. To the editor of a picture-minded newspaper, that’s always a challenge.

I drew the assignment of crashing the party. That wasn’t too difficult. Once in, I spotted several other New York press photographersâ€”also in disguise.

From a photographic standpoint, things looked bad. In a ballroom, the lighting is usually soft and romantic, rather than brilliant and photographic. This one was no exception.

Because of the poor light, the photographers agreed that we should try for posed pictures. I was picked to ask Miss Frazier.

Dancing was in full swing. To reach her, I got into the stag line. When my turn finally came, I told her, feigning some surprise, that the news cameramen had gotten inâ€”just like in the movies. I asked her if she wouldn’t pose. She barely had time to exclaim “Oh, dear no! Mother wouldn’t let me!” when the next man in the line was tapping my shoulder.

After this attempt, the other cameramen gave up, one by one, as the night wore on. The young lady continued to danceâ€”but at last, about 5 a.m., she finally sat down. For the first rime she was still long enough for an exposure that the poor light and my best lens demanded. I shot from a balcony.

The picture of Joe Louis delivering the K.O. to Arturo Godoy helped make prizefight as well as photographic history.

It was one of the first successful applications of multiple high-speed strobe lights to fight photography, a technique almost always used now at fights. Three lights were mounted in the framework above the ring, placed to give good cross lighting. A snap-switch attached to the camera shutter controlled the lights.

The picture was titled “Life in the Deadpan.” Until it was taken, Louis had always been dubbed “dead-panned.” But pictures, like figures, don’t lie.