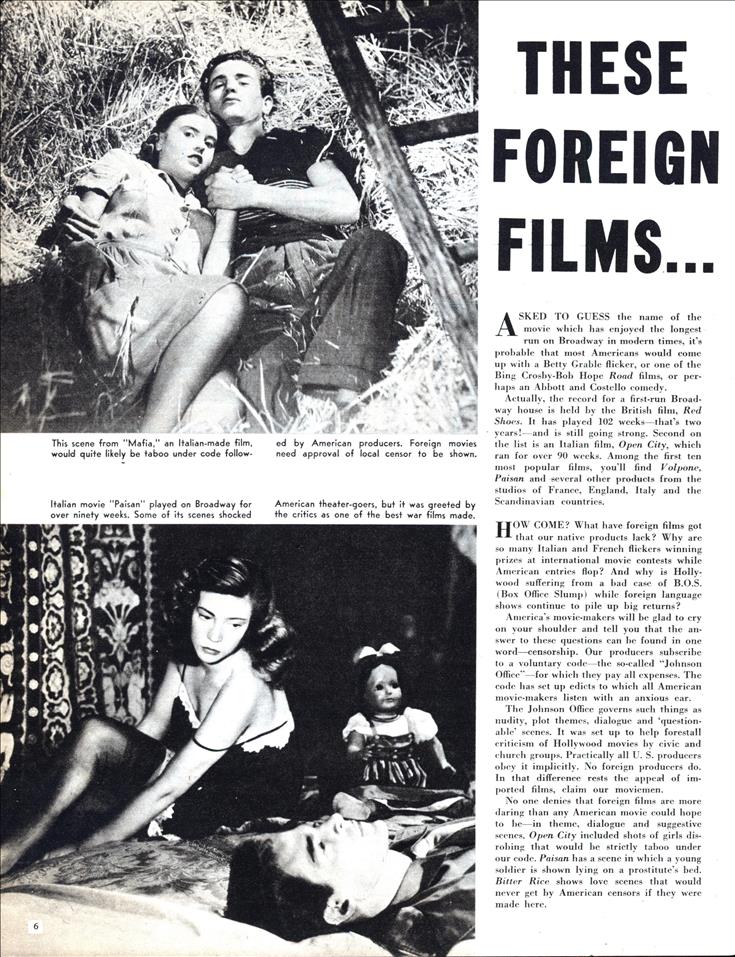 Actually, the record for a first-run Broadway house is held by the British film, Red Shoes. It has played 102 weeks—that’s two years!—and is still going strong. Second on the list is an Italian film, Open City, which ran for over 90 weeks. Among the first ten most popular films, you’ll find Volpone, Paisan and several other products from the studios of France, England, Italy ami the Scandinavian countries.

HOW COME? What have foreign films got that our native products lack? Why are so many Italian and French flickers winning prizes at international movie contests while American entries flop? And why is Hollywood suffering from a had case of B.O.S. (Box Office Slump) while foreign language shows continue to pile up big returns?

America’s movie-makers will be glad to cry on your shoulder and tell you that the answer to these questions can be found in one word—censorship. Our producers subscribe to a voluntary code—the so-called “Johnson Office”—for which they pay all expenses. The code has set up edicts to which all American movie-makers listen with an anxious ear.

The Johnson Office governs such things as nudity, plot themes, dialogue and ‘questionable’ scencs. It was set up to help forestall criticism of Hollywood movies by civic and church groups. Practically all U.S. producers obey it implicitly. No foreign producers do. In that difference rests the appeal of imported films, claim our moviemen.

No one denies that foreign films are more daring than any American movie could hope to be—in theme, dialogue and suggestive scenes. Open City included shots of girls disrobing that would he strictly taboo under our code. Paisan has a scene in which a young soldier is shown lying on a prostitute’s bed. Bitter Rice shows love scenes that would never get by American censors if they were made here.

THAT IS NOT to say that the films mentioned above are lewd or immoral. They handled themes that are a part of our everyday existence, hut are rarely given a screen treatment. Most of the foreign movies shown in this country are made for a mature audience. Few of them are “escape” films, of the type in which Hollywood specializes. Rarely are French or Italian flickers set in the familiar never-never land of American movies, where glamorous women loll in the salons of luxury liners and exchange chit-chat with vacant-faced young men faultlessly dressed in evening clothes.

While it may be true that foreign films are drawing part of their audience by reason of their greater freedom in treating love and raw passion, it is also true that many intelligent American movie-goers are patronizing the imports because they are made for thinking, feeling adults. Moreover, they offer a rewarding dramatic experience for Americans too long drugged by a steady diet of Hollywood musical comedies, cops-and-robbers chase films, and insipid Westerns.

IN ADDITION to sensitive treatment of basic human desires and passions, im- ported films enjoy their high reputation by reason of the selective distribution system they employ. Rarely are poor or second-rate foreign movies shown in this country. Only the cream of the crop of England’s, France’s and Italy’s best films are allowed to be exported, and as a result, foreign films have come to represent “good movies” in the minds of average theatre-goers. They have always had a certain “snob appeal” to those foolish few to. whom everything foreign is to be admired and everything American decried.

Add to these reasons for the popularity of foreign movies a third characteristic—fine acting. We don’t mean to imply that England or any European country has a monopoly 011 good actors, hut the scripts they are given allow them to play to greater advantage than U.S. stars.

In addition, players in imported movies seem chosen strictly on the basis of their acting ability. Too often American stars achieve their reputations by their looks or, in the case of women, by their bust measurement. Those who attend foreign films for the first time are usually surprised to learn that the best-loved stars of other countries are frequently quite plain, if not downright ugly.

But those who have seen rugged-featured Fernandel or Louis Jouvet or the late Harry Bauer realize that personal handsomeness has little to do with theatrical savvy. The blunt-nosed, sear-faced, lantern-jawed actors of Italy and Germany make our “glamour boys” look like ridiculous amateurs.

HAVING given you a few reasons why foreign flickers enjoy a well-deserved popularity, it is only fair to point out that technically they are far inferior to made-in-America products. We still have the best cameramen, the best set-designers, the best light-men and the best film technicians in the business. No one has dared compete with our cartoons, and in the purely physical reproduction of light and sound, Hollywood has no equal.

We can produce worthy films for an adult audience if our producers free themselves from the foolish fears that keep them turning out stories of life in penthouse apartments or on Caribbean cruises. Once they realize that movies need not he purely escapist to be attended and enjoyed, there is little reason why Hollywood cannot produce films better in every way than the imported productions.

Life can he tragic and hitter and wild and emotional, and it is these aspects which are the most genuine, the most moving, and which make the best pictures. There is an audience for such pictures, and if Hollywood will not produce them, through fear, ignorance or lack of imagination, then mature movie fans will seek out foreign films, finding in them the stirring spiritual experience Hollywood cannot or will not supply.