I’d wasn’t aware of this meaning of the word polygraph, though it actually makes more sense than the current definition. 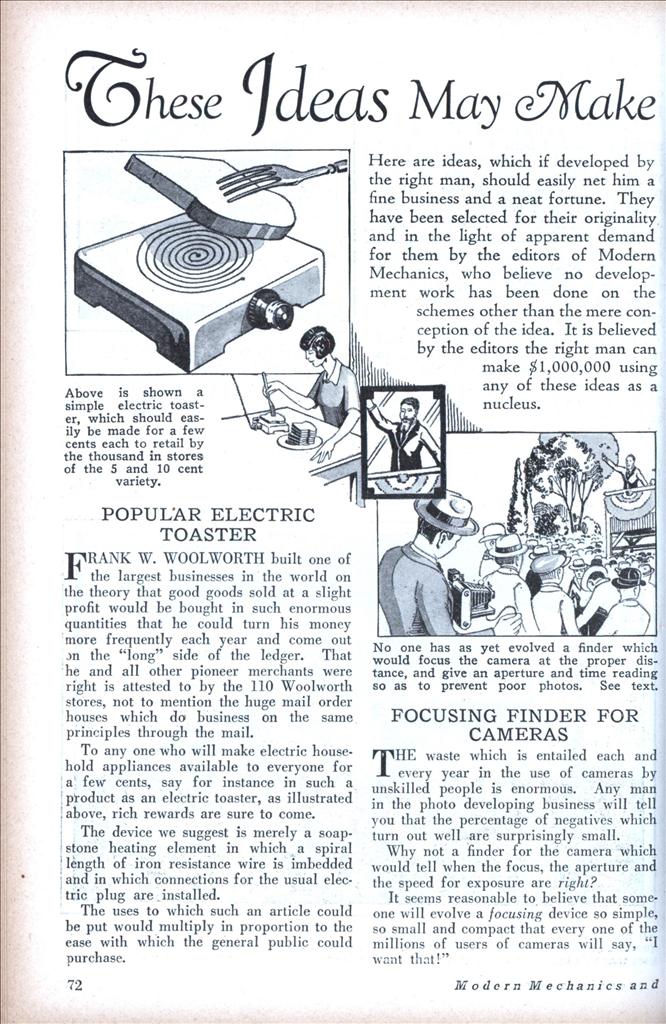 Here are ideas, which if developed by the right man, should easily net him a fine business and a neat fortune. They have been selected for their originality and in the light of apparent demand for them by the editors of Modern Mechanics, who believe no development work has been done on the schemes other than the mere conception of the idea. It is believed by the editors the right man can make $1,000,000 using any of these ideas as a nucleus.

POPULAR ELECTRIC TOASTER
Frank W. Woolworth built one of the largest businesses in the world on the theory that good goods sold at a slight profit would be bought in such enormous quantities that he could turn his money more frequently each year and come out on the “long” side of the ledger. That he and all other pioneer merchants were right is attested to by the 110 Woolworth stores, not to mention the huge mail order houses which do business on the same principles through the mail.

To any one who will make electric household appliances available to everyone for a few cents, say for instance in such a product as an electric toaster, as illustrated above, rich rewards are sure to come.

The device we suggest is merely a soap-stone heating element in which a spiral length of iron resistance wire is imbedded and in which connections for the usual electric plug are installed.

The uses to which such an article could be put would multiply in proportion to the ease with which the general public could purchase.

FOCUSING FINDER FOR CAMERAS
THE waste which is entailed each and every year in the use of cameras by unskilled people is enormous. Any man in the photo developing business will tell you that the percentage of negatives which turn out well are surprisingly small.

Why not a finder for the camera which would tell when the focus, the aperture and the speed for exposure are right?

It seems reasonable to believe that someone will evolve a focusing device so simple, so small and compact that every one of the millions of users of cameras will say, “I want that!”

DRAFTSMAN’S LETTERER
ONE thing for which there is a real and tremendous need is for a typewriter for draftsmen which would be universally adjustable over the drawing board, and which could be fitted with removable type platens carrying a variety of sizes and styles of lettering.

One prominent architect and engineer says that in drafting offices, there is a great deal of the time spent in merely lettering in by hand what should otherwise be quickly done by machine.

Our hunch is to provide the machine, similar to the one shown in the above drawing, with a movable carriage adjustable to all angles and parallels, and to ink it with printer’s ink so it would blueprint well. This should be a winner!

PORTRAITS FROM FILM
WOULD not the negative of a portrait or other photograph, if put into an enlarging machine and projected upon a piece of drawing paper, in a dark room, produce a hand-drawn picture if the pencil was used to fill in the projected negative so that it was an even black in all places? The resulting hand-drawn positive would have remarkable tonal quality.

Think of the fat advertising contracts which would fall into the lap of the man who invents a phosphorescent smoke for night skywriting! A more spectacular and conspicuous means of display than a sign in glowing smoke, written by plane, would be hard to imagine.