Mechanix Illustrated
Issue: Oct, 1955
Posted in: Animals For Profit
1 Comment on They Grub for a Living (Oct, 1955) 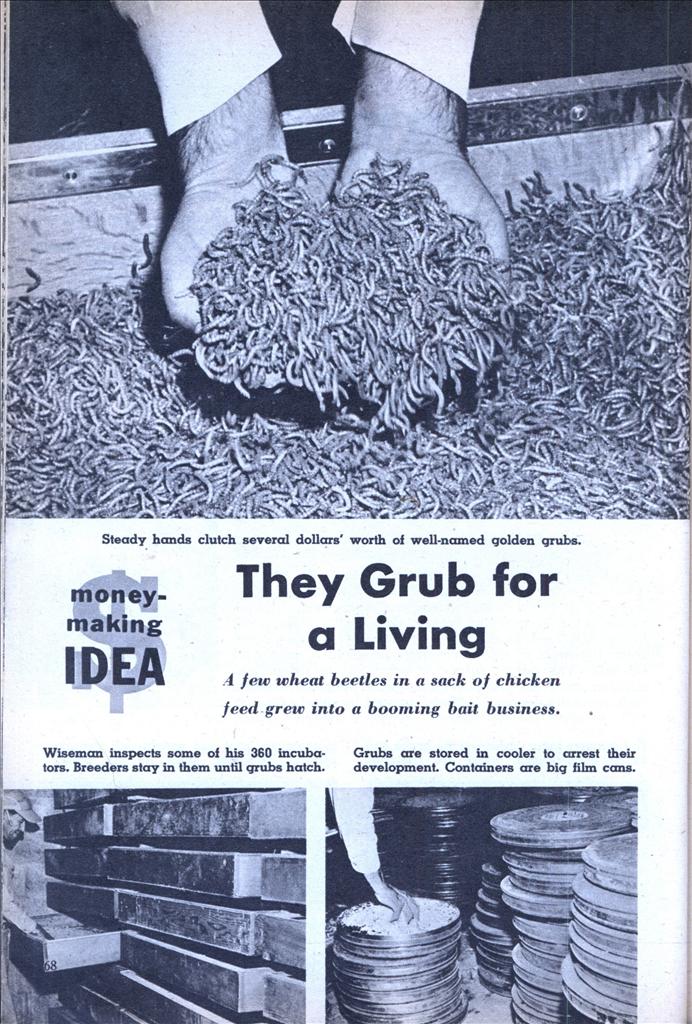 They Grub for a Living

A few wheat beetles in a sack of chicken feed grew into a booming bait business.

BUGS can be big business. Just ask Marlyn A. Palmer and Ray Wiseman; they’re up to here in them—80 million of them every year.

Palmer and Wiseman raise golden grubs and sell them to fishermen throughout the United States, Mexico and Canada, shipping as many as a quarter-million grubs a day in busy seasons.

The golden grub is the larva of the black wheat beetle. It hatches from an egg, remains a grub for a short time, then goes into the pupa stage from which it gradually changes into a mature beetle. The complete transformation takes about six months. It is the larva, or grub, that drives fish frantic and sends anglers flocking to the bait shops.

The whole thing began over a half century ago when a German immigrant truck farmer, living near Torrence, Calif., discovered some black wheat beetles and grubs in his wheat meal chicken feed. An ardent fisherman, he wondered if the lively little grubs wouldn’t look good to trout. They did, and the farmer went into the grub business. For 40 years he raised grubs and sold them to other fishermen with moderate success. The big change came when the old man’s health failed and Ray Wiseman bought the business. Wiseman’s original investment for a lock-stock-and barrel purchase was a little over $10,000, considerably more than would be needed to start from scratch, but the money bought the old man’s years of know-how as well. Later Wiseman took in Palmer to handle sales and distribution.

During his first year of operation in 1947 Wiseman produced over four million grubs, almost enough to return his initial investment after distribution costs were paid. Costs of production were, of course, still to be deducted from the gross figure.

The firm made no attempt at immediate expansion, prefering to grow slowly while perfecting a fool-proof mass production system and at the same time propagating a superior grub. They began to hit their stride in 1954 when the production rose to 40 million grubs. Present figures show that 1955 production will exceed 80 million. Several million of these will be held back as seed stock, but the remainder will still return a gross income in excess of $300,000.

Wiseman and Palmer have streamlined the business to a point where it has really become two separate operations. Wiseman produces the grubs, paying all his own costs of production. Palmer then buys the grubs from Wiseman at so much per thousand and pays all costs of packaging and shipping.

Putting the grubs in the hands of the dealer costs Palmer approximately $3.30 per dozen cans (1200) of grubs. This figure includes the grubs themselves, cans, feed, shipping cartons, advertising material (included in carton), label, tape and postage. It also includes the producer’s profit.

What are the potentials? “Take a look at the figures,” say Wiseman and Palmer. “There are 30 million fishermen in the United States today. To supply each of them with just one can of grubs per year would require three million grubs. Of course, we realize that not all anglers will buy them. On the other hand there are many thousands who will use from one to two dozen cans each season. That is the goal we’re shooting for, but if we hit only a third of that figure we’re still going to have to • produce more than ten times our present output.”

Experimentation and prolonged study in the early years established a number of facts about the wheat beetle. By isolating a few beetles it was determined that one female beetle produced approximately 2,000 eggs per year, the majority of which hatched into grubs.

The big trouble was that the grub remained a grub for a very short time. Too often the grubs were no longer grubs when they had reached the fisherman. That obstacle, and it proved to be the major one, was hurdled when it was discovered that the grubs would remain dormant at temperatures under 50 degrees.

A cooler room was built at the three-acre farm and a large refrigerator installed in the sales office on Culver City. That did it. Now the grub farmers could handle the larva by the million if necessary, without risking loss due to the processes of nature.

Once the grubs are removed from the refrigerator they become active again and renew the process of becoming a beetle. However, at any time they may be returned to the cooler where they immediately go to sleep again.

With the problem of keeping the grubs solved Wiseman began improving the breed. The largest grubs from each hatch were put aside in boxes containing wheat flakes and allowed to mature as rapidly as possible. From the beetles thus obtained the largest and liveliest were selected as breeding stock. In a surprisingly short time Wiseman was i able to produce grubs nearly twice as large as the average non-cultivated larva.

When the big grubs, which the partners call Golden Jumbo Grubs, attain their full length, man steps in to interfere with nature by cooling junior down so he won’t go into the pupa stage. The grubs are placed in trays containing wheat meal and kept refrigerated until needed for shipping.

Palmer has worked out the packaging and shipping system to a fine art. The grubs are sold in %-pint cardboard containers holding 100 or more grubs each.

The containers are lined with glassine so the grubs won’t chew their way to freedom during shipment or while in the fisherman’s pocket. Some 50 dozen of these special containers are laid out on a huge table with their perforated lids stacked nearby. Out of the cooler comes the trays of slumbering grubs. But they aren’t just poured into the cans—not yet. For the grubs, like snakes, shed their skins and no dealer or fisherman wants a can of bait half filled with old dried skins. So they are screened. .

This process consists of pouring the grubs onto a special sieve made of a loosely woven cloth similar to cheesecloth. Slowly awakening from their hibernation, the grubs, who don’t like light, immediately crawl through the holes in the cloth into a clean porcelain tray, leaving their old skins behind.

Into each can now goes a half cup of wheat flakes for the 100 grubs to _ chew on en route. Also a cubic inch of special Luther Burbank spineless cactus which furnishes enough moisture to quench their thirst. A thin layer of paper is wadded on top and the lid goes on. The paper is for the grubs to crawl up on when they are sated with wheat meal. The container will not be opened again until the fisherman is ready to wet his line.

Most of the grubs are sold through dealers, but you can buy them direct through the mail for a dollar a can. Incidentally, the U. S. Forest Service says that grubs discarded in the woods can do no harm there.

According to thousands of voluntary letters in the firm’s files the golden grubs catch bass, trout, whitefish, perch, blue-gill, crappie and sunfish when other natural baits fail. A fair share of America’s 30 million fishermen now keep a can or two of the grubs in their home refrigerators to be hauled out when the fishing urge strikes.

Ice fishermen especially love them for the simple reason that they are the only live bait other than minnows that will stay alive in the ice-cold water.

To supply the present demand the farm has 360 incubators in four large grub hatcheries producing a 100-per cent crop every six months, a total of 80 million grubs yearly. “Yet,” says Palmer, “it would require 30 firms as large as our to supply the estimated 30 million fishermen in America.” •