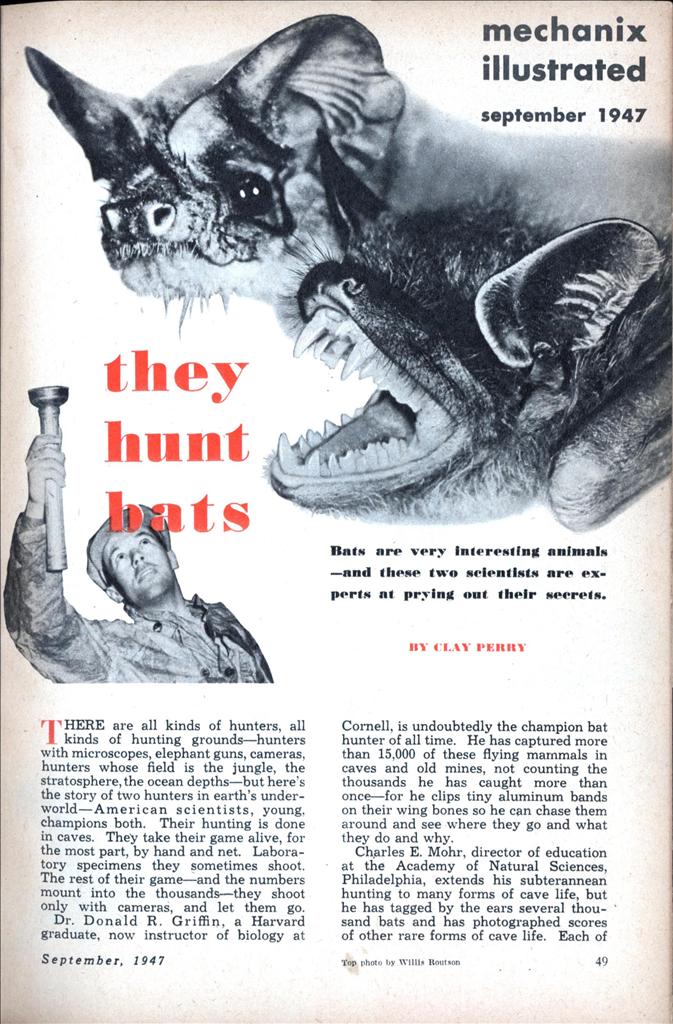 Bats are very interesting animals – and these two scientists are experts at prying out their secrets.

THERE are all kinds of hunters, all kinds of hunting grounds—hunters with microscopes, elephant guns, cameras, hunters whose field is the jungle, the stratosphere, the ocean depths—but here’s the story of two hunters in earth’s underworld—American scientists, young, champions both. Their hunting is done in caves. They take their game alive, for the most part, by hand and net. Laboratory specimens they sometimes shoot. The rest of their game—and the numbers mount into the thousands—they shoot only with cameras, and let them go.

Dr. Donald R. Griffin, a Harvard graduate, now instructor of biology at Cornell, is undoubtedly the champion bat hunter of all time. He has captured more than 15,000 of these flying mammals in caves and old mines, not counting the thousands he has caught more than once—for he clips tiny aluminum bands on their wing bones so he can chase them around and see where they go and what they do and why.

Charles E. Mohr, director of education at the Academy of Natural Sciences, Philadelphia, extends his subterannean hunting to many forms of cave life, but he has tagged by the ears several thousand bats and has photographed scores of other rare forms of cave life. Each of these men has been at this sort of thing for about 15 years.

Out of their field work and laboratory studies have come some striking discoveries. Aid to blinded soldiers is perhaps the most wonderful result, through the application of what Griffin calls “echolocation,” which is the locating of objects by judgment of the echoes which bounce back from them. Bats are the great exponents of echolocation. Flying in the dark they constantly utter supersonic cries, and with their marvelous, super-sensitive ears catch the echoes from everything they approach.

Griffin started his studies of bats as a freshman at Harvard, following them throughout his course, traveling all over New England and part of New York State and crawling into every hole in the ground that he could find which might have bats hanging up by their heels. He also scrambled up into the attics of old houses, into storehouses, into barn lofts, and into trees, where the bats have their summer homes—the females bearing their young and setting up their nurseries there, while the males are ostracized and have to hang up elsewhere. Sometimes he trapped them by covering the small openings under the eaves of a building with a special cloth net having a long bag into which the bats would drop, unharmed, as they emerged at dusk to fly about after insect food. In caves he would tote long-handled nets, and use tweezers to pluck the bats out of crevices too small for his fingers to get in.

Prexy Mohr pioneered in bat catching in the caves of Pennsylvania and western New York State. Today, from the activities of Griffin and Mohr, you’ll usually find in all the caves and old mines in eastern America some bats banded or tagged by them.

Last summer Mohr made two long trips to Mexico to visit huge caverns where he found new and unusual game deep down in the earth, some of it in water. He has caught or shot with a camera, both in still and moving pictures, a greater variety of underground fauna than any man in the world— life such as blind fish, blind salamanders, white crayfish, blind beetles, beautiful white grasshoppers with feelers longer than their bodies instead of eyes, blind amphipods, isopods, planarians, transparent worms, and masses of insects such as the daddy long legs which he calls “the skunk of the cave world” because when disturbed they give off a very pungent and unpleasant odor.

These underworld hunters go into places where angels fear to tread. In Mexico Mohr went into one cave which his native guides refused to enter, it was so dangerous.

Much of the work of these biologists has to be done in winter, when bats hibernate. They have to explore dangerous ice caves, where they slip and slide around, only kept from death falls into deep “wells” by ropes which they use to rappel down and up sometimes for a hundred feet and more. They crawl on their bellies in streams and under waterfalls, paddle about in rubber boats on deep cave lakes and rivers, and Mohr has stood in icy water to his neck with his camera held aloft to get a picture of some amphibian or fish.

Mohr’s strangest experience and one of his most strenuous adventures was the capture of 2,500 bats at one time. He was assisted by a corps of aides, including Pennsylvania highway engineers, and worked fast trying to save the lives of a huge colony of little myotis lucifugus or pippistrelles from an old tunnel under a hill. The tunnel had been bored for a proposed railroad that never was built; was to be blasted larger to accommodate the famous Pennsylvania speedway from Pittsburgh to Harrisburg then under construction. That tunnel, wet and slimy when the engineers first started to work on it, had an estimated 8,000 bats hanging up in it. In three hours the bat-hunters caught all that did not wake up and fly out. In a blinding snowstorm they transported them by automobile 90 miles to a remote natural cavern already inhabited by another bat colony and there released them.

The furry flyers stayed out the winter, but then returned to their former tunnel. There they found that their roost had been spoiled, for there was no longer anything for them to hang to, the smooth new concrete afforded no toe-holds. After flying in and out many times, they gradually dispersed to other havens.

Many of those that were not captured were killed by the blasting. Bats are so sensitive to sound that a .22 rifle fired in a cave will cause them to drop to the floor, though not hit by the bullet.

In another transfer of bats Mohr took 200 of them 12 miles from their home cave—and found that overnight they flew back to it, every one. Griffin has recorded a bat flight of 152 miles from cave to cave. One little brown bat, when last seen, had worn a band for seven years, giving some indication of their longevity.

Between them Griffin and Mohr have found that the northeast has nine species of bats, six of them cave bats, the others tree bats. Griffin has reason to believe that one species of large tree bats flies 400 miles across the sea to winter in the Bahamas, for they do not go dormant and hibernate in caves.

Dr. Griffin was recently cited by the War Department for his work with blinded soldiers, most of it done at Old Farms School, Avon, Conn., where the government has a home and orientation center for the unseeing veterans of the war. Here, by the use of echo-location the blind men have learned to walk about with more confidence, even to run, swim and, believe it or not, ride bicycles.

The two scientists have many helpers, four hundred, at least, scattered about the country, fellow members of the National Speleogical Society, who report-when they find banded or tagged bats and also send specimens of rare cave fauna without wings. Some of these aides make long trips. Young Ernest Ackerely of Athens, Ga., a college student, went to Mexico with Mohr, then went again alone, and brought back specimens of bats in alcohol. Roger Johnson of Springfield, Mass., who began “spelunking” in caves as a hobby at about the time Griffin started bat banding, is another adventurous helper, and has accumulated some special apparatus such as submersible rubber suits, a five-man rubber boat and a fold-boat, for use in caves with deep water in them. Johnson got so interested in the welfare of blind soldiers that he scoured the country for tandem bikes to be used in teaching them to ride—at first with a seeing guide, then a pair of them, sightless, making constant sounds with bells or whistles to get the echoes.

Aside from this valuable work, these underground Nimrods have discovered things about bats that hardly anyone knew until a few years ago, and have debunked a lot of superstitions about them. They are not poisonous. They kill and eat insects that are harmful to. mankind—actually keeping free of mosquitoes the entire area of Tanglewood, at Lenox, Mass., where the Berkshire Music Festival crowds may sit or lie out on the grass in the open while the Boston Symphony Orchestra plays, without suffering a single sting. It happens the Festival management once asked Dr. Griffin to trap the bats out of the old high-peaked roof of the Tappan mansion, headquarters for the Festival, because they were believed to be nuisances. He trapped them all right, but when transferred they came back and found a way into the attic despite plugged holes. Now they are considered one of the greatest assets of the Festival.

The studies of Griffin and Mohr may prove extremely valuable to more than pure science and the applications exampled here. If we have to retreat into caves to escape the atomic bomb, here are two well-informed guides, and the bats would serve as natural danger spotters, like canaries in coal mines. They can find their way around anywhere in the dark, dodging even silk threads.

The writer, lost once in a cave, was guided out by a flight of bats going out for supper.