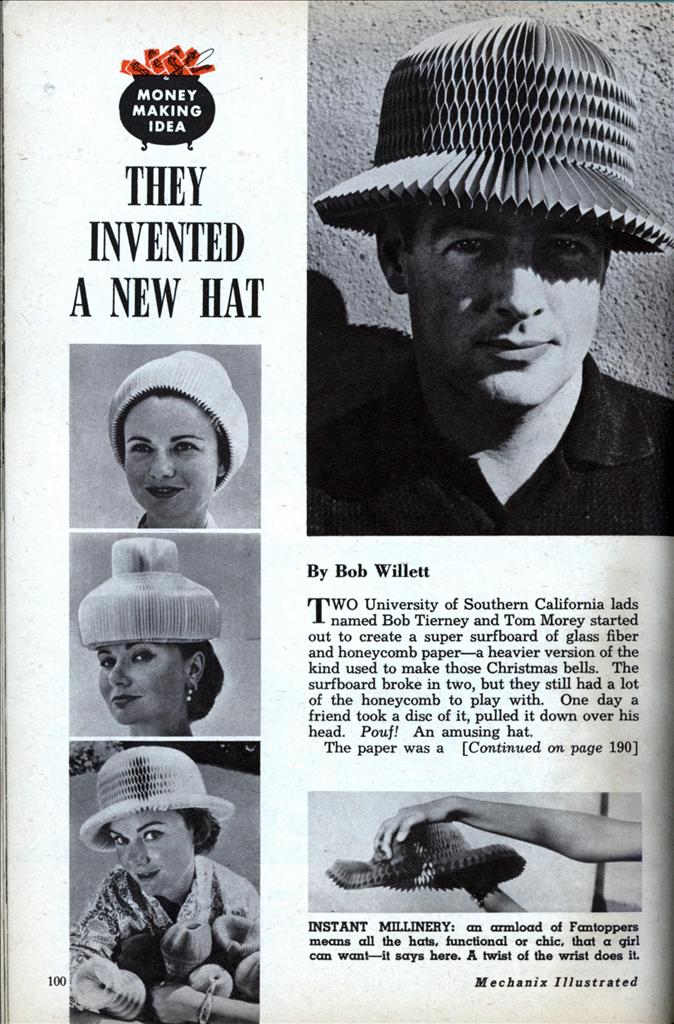 THEY INVENTED A NEW HAT

TWO University of Southern California lads named Bob Tierney and Tom Morey started out to create a super surfboard of glass fiber and honeycomb paper—a heavier version of the kind used to make those Christmas bells. The surfboard broke in two, but they still had a lot of the honeycomb to play with. One day a friend took a disc of it, pulled it down over his head. Pouf! An amusing hat. The paper was a free sample from the manufacturer; it was used in aircraft construction because of its lightness and weight. A disc of the stuff could be pulled and shaped as the wearer desired it; it could be functional, to keep off the sun, or chic—see the pictures.

One of their first customers was Darrylin Zanuck, the movie man’s daughter, who runs a women’s wear shop in Santa Monica. She ordered two dozen, wore one herself, showed them around the 20th Century-Fox Studios. Dody Heath (shown in photos), Joan Collins and Red Skelton (a hat collector) all bought Fan-toppers, as the hats were called. Joan Collins, was pink, to match her sports car. Bob Hope wore one while golfing. Fan-toppers became a fad, and Bob and Tom were soon operating a factory with a crew of seven workers, manufacturing a patented product. With this staff and some simple tools they get out 50,000 lightweight lids a month, each costing 50 cents to make. Retail price is about $2.00.

Neither Bob nor Tom expects to be making Fantoppers forever. But they have lots of ideas—many exciting toys, for instance—and they do expect to stay in manufacturing. They even have a notion of making a super surfboard someday.