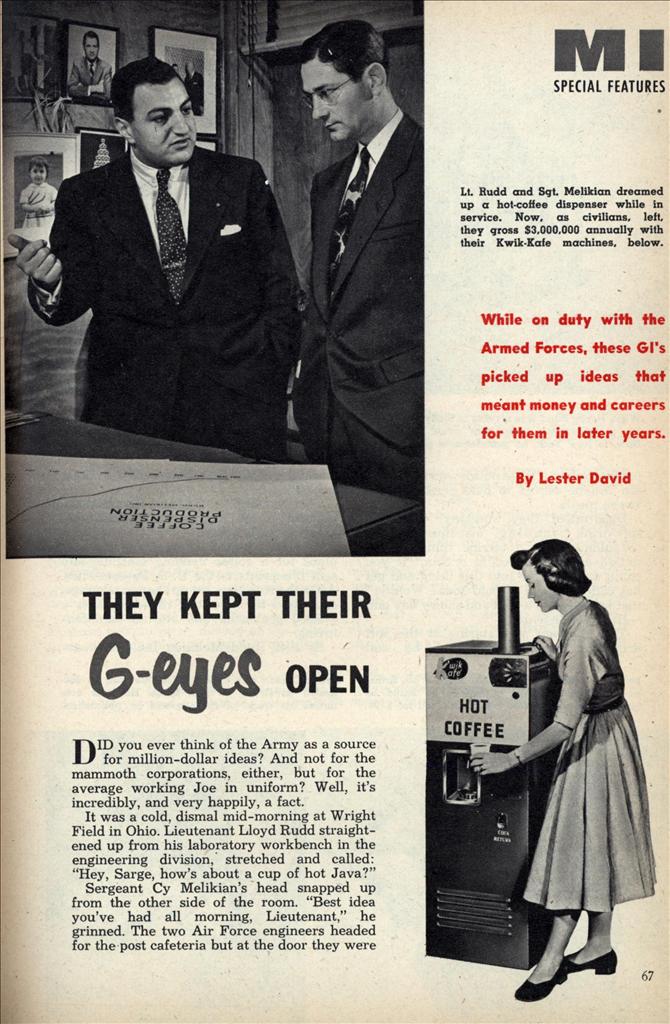 THEY KEPT THEIR G-eyes OPEN

While on duty with the Armed Forces, these Gl’s picked up ideas that meant money and careers for them in later years.

DID you ever think of the Army as a source for million-dollar ideas? And not for the mammoth corporations, either, but for the average working Joe in uniform? Well, it’s incredibly, and very happily, a fact.

It was a cold, dismal mid-morning at Wright Field in Ohio. Lieutenant Lloyd Rudd straightened up from his laboratory workbench in the engineering division, stretched and called: “Hey, Sarge, how’s about a cup of hot Java?”

Sergeant Cy Melikian’s head snapped up from the other side of the room. “Best idea you’ve had all morning, Lieutenant,” he grinned. The two Air Force engineers headed for the post cafeteria but at the door they were confronted by a large notice—no more coffee will be served to field personnel between meals.

Disgruntled, they wandered over to a soft-drink vending machine instead. “Wouldn’t it be a terrific thing,” Rudd mused as he plunked in a coin, “if you could drop a dime into this thing and get hot coffee instead of cold soda? Wouldn’t that be a deal on a cold and snowy day and —Hey! you listening?”

The Sergeant was staring at the soft drink machine. “Lieutenant,” he said dreamily, “you just made us a million bucks!”

That was back in 1944 and the astonishing fact is that Rudd and Melikian went ahead to do just that!

In their off-duty hours, they drew up plans for a coffee vending machine and sent blueprints to the U. Si Patent Office. After the war, they set up shop in a garage, canvassed for investors, raked together a $75,000 grubstake and started manufacturing.

ing $3,000,000 annually through sale of its Kwik-Kafe dispensers, the country’s first fully automatic coffee vending machine. Now millions of cups are sold each year from them installed in offices, sports centers, factories, garages, wherever people congregate.

The two ex-soldiers are now big business tycoons because they got a hot idea while in the Army. Exceptional? Not at all!

A thumpingly large group of young businessmen are sitting at the top of the heap these days or climbing steadily up there because their armed forces experiences prompted the birth of solid, unique, dollar-producing G-Ideas.

These are not the fellows established in well-paying jobs through training they got in service, not the radar experts, X-ray technicians, radio operators and the like who learned their skills in uniform. Those lads are doing right well, but there’s another large bunch of go-getters. These are the sharp-witted lads who struck out for themselves and now run businesses of their own, many in the heavy moneybags brackets, because they kept their G-eyes open.

Like Francis Hoffman, for instance. Young Hoffman bailed out of his plane one day in 1945 while he was far behind enemy lines in southern Germany. He landed squarely in the middle of a Bavarian farm, was offered shelter by the family and willingly stayed as house guest until he could rejoin his unit.

Food wasn’t too plentiful but the Haus-frau did wonders with what was available. For salads she concocted a tangy, zippy dressing unlike anything Hoffman had ever tasted. The memory of that sauce lingered long after a meal.

In fact, it remained with Hoffman long after he had returned home to Madison, Wis., where his brothers went into the restaurant business. Francis perked up with the idea of recreating that Bavarian salad dressing for the patrons. For months he experimented in the kitchen with a variety of ingredients and finally brewed up an exact duplicate.

The customers were delighted—they asked for some to take home and the brothers obliged. And then came the Big Idea. Why not put the stuff up in bottles and sell it? Thus the Hoffman Sauce Company was born and now the salad dressing is being sold as fast as it can be made.

Hoffman, you see, found a fortune in the Army.

So did Jerry Brofman of Brooklyn, N. Y., who is only 28 but already head of his own thriving ‘business, needled into existence by what Jerry saw in uniform.

While in the Air Force young Brofman saw planes, lots of planes. They thrilled him and they thrilled his buddies and slowly the thought generated: the vast majority of these guys will return to civilian life, take earthbound jobs and rarely get a chance to be around aircraft again. But the deep interest will remain. So wouldn’t they get a big kick out of putting together prefabricated parts from model kits in their spare time and flying them with tiny motors?

When the war ended, he rented a tiny square of space in a one-story building and began making a line of racing planes. Jerry had guessed correctly. Ex-GI’s, as well as other plane-crazy folks, began buying kits. In fact, returning soldiers gave new impetus to the entire model kit industry and Jerry rode along with the tide. Now his factory occupies 45,000 square feet of space and his sales run close to a half-million kits annually.

Another outfit is selling an entirely different kind of kit and a big business has resulted because a man in uniform kept his eyes open. While flying the Burma Hump run, Maj. Murray A. Kahn spotted the eerily beautiful Chinese Ming tree, a product of the Ming Dynasty cultured and grown throughout Japan and China.

With William H. Fraser, Kahn set up the Nevada Ming Tree Company in Reno, Nev., and set about designing and creating replicas of these legendary trees for sale in flower shops and better stores. He organized a staff, sent them around gathering the needed growths, assembled them and sales are spiraling.

After the business was rolling, Kahn designed a Ming Tree Kit consisting of all materials knocked down ready for assembling at home. It’s now sold all over the country and the results can be seen in countless living rooms.

The Army, indirectly, came up with the idea.

And the Army, in its own way, has also come up with countless ideas for gadgeteers. Look, for example, at Russell L. Stoecker who was stationed at the Marine Air Station in El Toro, Cal. Stoecker spotted the containers of canned milk which every veteran remembers. They’re fine for Gl mess halls, Stoecker reasoned, with holes punched in the top ready for pouring. But housewives wouldn’t want them on their tables that way. Not pretty enough.

How about a combination safety opener, dispenser and pitcher for the stuff? So Stoecker sweated and tinkered and finally came up with the answer. The gadget opens at the bottom, an unopened can of condensed or evaporated milk is inserted, pushed home and the bottom replaced. A pair of tubular knives open the container when it is inserted in the aluminum shell. Rubber seals protect openings from dirt while a slide arrangement allows easy pouring.

He got a contract for the manufacture, sale and distribution of the unique pitcher for a period of 17 years with a royalty arrangement. And it must be good because Stoecker turned down a $75,000 offer from a canned milk company for all rights.

Army life also gave Ben Reyes of Los Angeles, Cal., an inspiration for a winning gadget. Ben and his friends were holding a jungle barbecue with a haunch of beef cached from the mess tent. To make seasoning easier, Ben dreamed up the idea of actually injecting a solution of herbs and spices directly into the meat using nothing more elaborate than an ordinary veterinary syringe. The result was tops in taste because the roasting diffused the flavors throughout the tissues of the beef.

When he doffed his uniform, Reyes had a beautifully machined, aluminum savorizer constructed and the comments of friends who tasted its effects were so enthusiastic that he decided to reproduce it for sale. It’s now selling all over the U. S.

Many young men, talented in various kinds of craftsmanship, have discovered materials with which to work up unique— and very salable—items of art work during their sojourn in the services. One Gl found a special kind of multi-colored sea shell on the Philippine coast while he was stationed there. Now he imports them and creates ash trays, wall decorations and paper weights which he is selling by mail order.

A New Yorker actually took empty food tins from the mess hall garbage can, cut little figures out of the metal and after his discharge continued experimenting until he developed a new art form—stainless steel sculpture. He is Harold G. Egan and in his Greenwich Village, N. Y., studio he cuts, twists and hammers the shiny metal into fanciful figurines and wall decors which he sells to individuals and stores.

Can all this strike home to you? It can, right amidships, and for this reason: if you served in the armed forces during or after the war, or if you are going to shortly by courtesy of the draft board, there is graphic proof that money-making ideas abound wherever you have been or wherever you may be going.

If you’ve been a Gl, lie down somewhere and think hard. Let your mind roam back once again to all the areas you’ve been as a soldier, sailor, marine or flier. What did the people there have which Americans either need or want or could be induced to need or want?

Was there, for instance, some rare delicacy, either grown or made in the locality which cannot be found in the U. S., something you remember fondly and despair of ever finding again? It might be anything—a tropical fruit, an herb, a special regional dish. Can it be imported in quantity or can the dish be duplicated?

How about gimmicks and time and labor savers peculiar to the area where you’ve been? Was there some household work-easer used locally which can be adapted? Some ways which the inhabitants have found to solve the same sort of problems Americans have in homes, offices, gardens, factories?

And how about souvenirs? Americans, everyone agrees, are the world’s champion collectors of mementos, spending a whopping $12,000,000 annually for them. Soldiers are no exception. Foreigners, watching in amazement as GI’s carried home duffel bags bulging with remembrances, used to say: “The Yanks are fighting the war for souvenirs.” They didn’t, as matters turned out, but there’s still a jackpot idea in the wisecrack.

Now maybe it’s too late for veterans who have been places to get het up about mementos—but how about the GI’s who are just going in or are recently returning from far-off spots where American troops are stationed? What can you think up in the souvenir line for them?

Cash-producing ideas can also be found by turning things around—instead of adapting something from a foreign land to this, what about giving other areas something the U. S. has which they lack? You’ve been there— what do the people need?

There’s no telling where in the armed forces a bright, gold-plated idea may be lurking. Edward Ryan of Cincinnati, Ohio, found one in the prosaic Personnel and Classification section of the Air Force. He learned a lot about putting the right man in the right job, so back home he began the Scientific Placement Systems, determining through aptitude and other tests exactly what position a client is best fitted to fill.

Maybe there were a lot of gripes in the Army but these GI’s are now in G-idyllic spots because they kept their G-eyes open.

Does it give you a G-inspiration, too? •