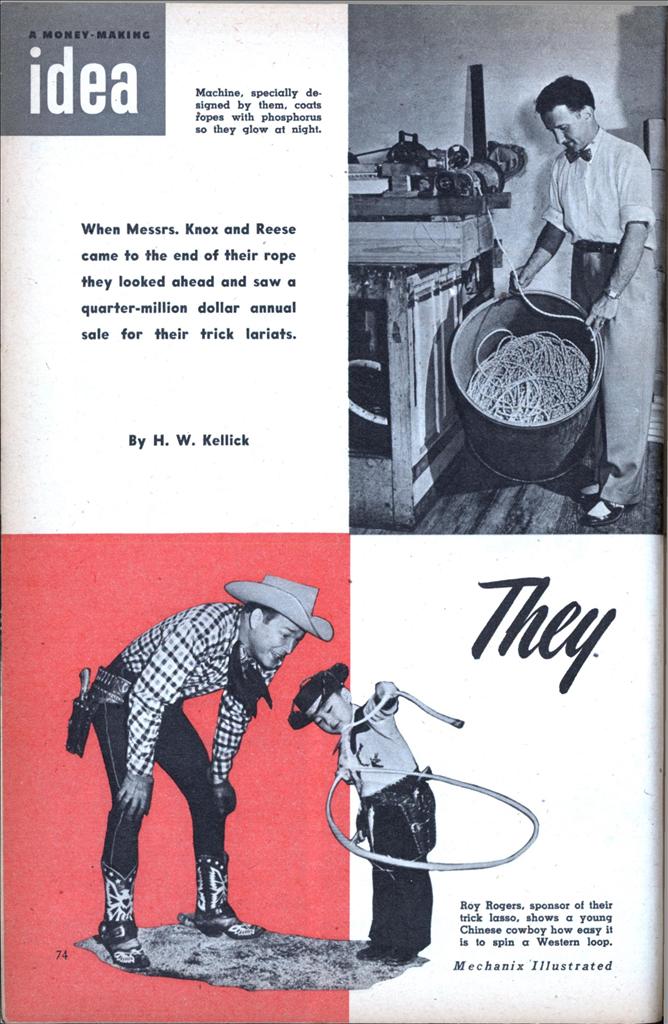 They Lassoed a Fortune

When Messrs. Knox and Reese came to the end of their rope they looked ahead and saw a quarter-million dollar annual sale for their trick lariats.

THERE’S an old saying, “Give a man enough rope and he’ll hang himself.” But when Dave Knox and Bill Reese got enough rope they didn’t hang themselves; they hung onto a business idea which now grosses $235,000 a year.

There’s hardly a buckaroo between the ages of five and 50 who doesn’t spin a lariat turned out by the Knox-Reese Company of Philadelphia. Anyone can twirl the rope in professional style without a single lesson. It’s been in the movies, on TV, in rodeos—wherever the cowboys are the big attraction. It even starred in Annie Get Your Gun on Broadway.

The whole secret lies in a simple gimmick, a trick swivel, which converts an ordinary piece of rope into a lasso.

How did all this come about? Well, back in 1945 Dave was in the Army Air Force attached to a unit making training films in Hollywood. As a director, he was always confronted with technical problems.

Of these there was one in particular that puzzled him. It seems that the script called for a scene showing how a gyrosta-bilizer works in helping to balance a plane in the air. All sorts of devices were suggested and tried but they failed and much film footage was wasted.

One day while watching a cowboy swing a rope in a Western movie, Dave suddenly hatched an idea. A trick roper could control his lasso while it spun in the air by twisting his wrist, Dave reasoned, and this action could explain the point he was trying to make.

Expert ropers were enlisted for the experiment but none could produce the required effect clearly enough. Dave pondered for a day or so. Then he fashioned a crude swivel which he fastened to a rope. It did the trick without the wrist action.

Shortly thereafter, his life-long pal, Bill Reese, then an electrician in the Navy, came to Hollywood on a furlough. The two got together. As a gag, Dave showed his friend how he could twirl a lasso like a real cowboy.

“That’s terrific,” said Bill. “Where did you learn to swing a rope like that?”

Dave laughed. Then he let Bill in on the secret. He showed him the swivel.

“Something should be done with that gimmick,” suggested Bill.

Together, they formulated plans to manufacture lariats for kids. They slept on the idea for a couple of days.

Then they met Roy Rogers at a Hollywood party and showed him their trick lasso. Very much impressed, the movie cowboy encouraged them to go ahead with their project and vowed that if the boys ever needed his help, he’d be ready and willing.

In 1946 when they were back home and out of service, they resumed their plan for manufacturing lariats. The Veteran’s Administration certified them as being eligible for a G.I. loan. As a result, Dave and Bill called on local bankers and presented their plan. “It’s a poor risk,” bankers told them and refused to okay such a ridiculous enterprise. The two ex-G.I.’s were actually laughed out of the banks.

They decided to give the idea a whirl anyway. They pooled their mustering-out pay which amounted to $400. Working in Bill’s Upper Darby, Pennsylvania, basement, they fashioned some hand-made swivels. Then Dave “borrowed” a clothesline from his home and with a razor blade cut the rope in ten-foot lengths. Then they attached the swivels.

Like all new enterprising business men, they lingered long on finding a name for their product. Finally, they called it “The Trick Lasso.”

One afternoon shortly thereafter Dave demonstrated the lasso before the buyer of a sporting goods store. He was amazed. “Let me try it. I always wanted to twirl a rope like that,” he confessed.

One twirl and he gave Knox and Reese an order for one gross of lassos.

Jubilant over their first big success, Dave and Bill immediately went to work. The first night they ran out of rope. Bill went to the neighborhood hardware stores and bought them out. Still they didn’t have enough.

Then they discovered a place in Philadelphia where a load of surplus rope was for sale and they needed $2,900 to swing the deal.

They went to the Corn Exchange Bank and laid their cards on the table. The bank refused a loan but they themselves bought the rope and made a deal for the boys to repay the money in monthly installments.

A few days later a huge trailer carrying some 500,000 feet of rope backed up to Bill’s house. The vets took one look at the load and gasped. “Where’ll we put it?” said Bill. “Search me,” replied the puzzled partner. They filled the living room, bedrooms, bathroom and cellar and still needed space.

Bill’s mother, father and sister helped to cut the rope with razor blades while Dave and Bill attached the swivels and packaged the product in crude cellophane envelopes.

After a long, thorough search they found a machine shop that could turn out the swivels in large quantities at a reasonable price. Next, as business improved, they latched onto some surplus machinery and moved their basement operation into a plant in West Philadelphia. They added some help and by the end of the year their business was beginning to show signs of success.

Then they realized that in order to make their item universally known, they’d need some high-powered promotion and outside help.

In the fall of 1947, Roy Rogers brought his rodeo to Philadelphia. Remembering the cowboy’s promise to help them, Knox and Reese decided to take advantage of his offer. They called on Rogers and showed them their improved lasso.

He was impressed with it and its safety feature which prevents it from forming a tight noose which might get some junior cowpoke in trouble. He offered Knox and Reese a check for $25,000 to help the project but it was modestly declined. Knox and Reese had a counter-offer. Would he sponsor the lasso and let them use his picture on their promotion? He agreed.

Roy Rogers’ trademark on the colorful cellophane packages made business boom. Soon they were producing 6,000 lassos a week. They now use more than seven million feet of rope a year and spend something like $60,000 in window displays, some of them talking displays of life-size cardboard cutouts of Roy Rogers.

Last year when Roy Rogers appeared in New York with his rodeo, some 50,000 ropes were sold in the audience. When Dave Garroway was doing his TV show in Chicago, he used the lasso for a sequence in his show, not mentioning the name of the product. Next morning, Knox and Reese got a long distance phone call from Marshall Field, Chicago, who ordered 200 dozen to be shipped air express. The “store is now a steady customer. And the way sales are mounting, soon every cow-boy-minded person in the country will be one, too. •