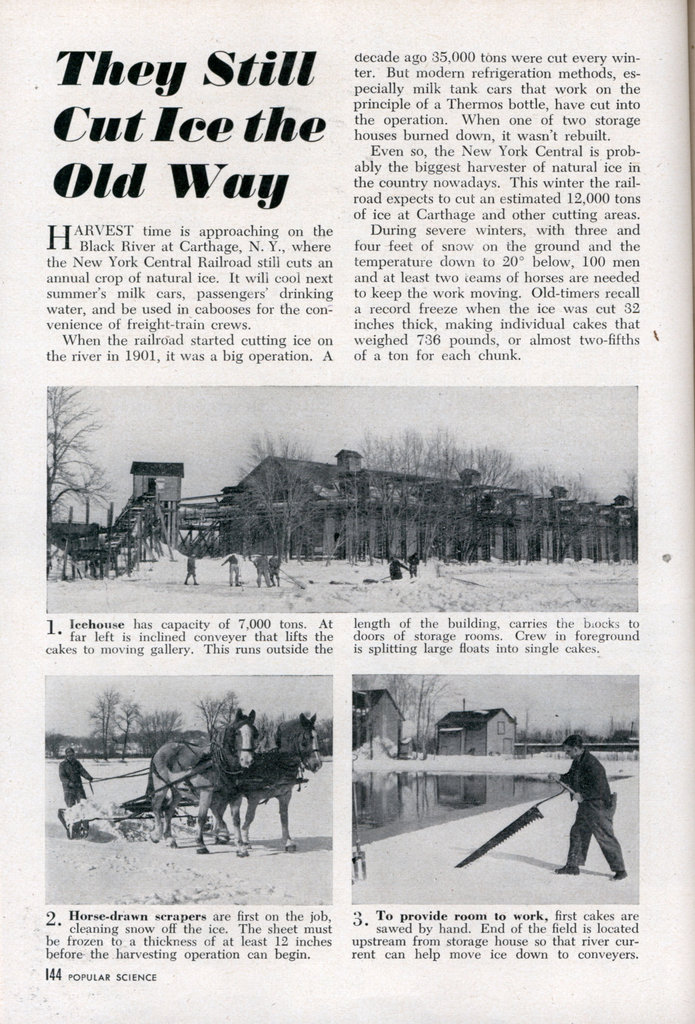 HARVEST time is approaching on the Black River at Carthage, N. Y., where the New York Central Railroad still cuts an annual crop of natural ice. It will cool next summer’s milk cars, passengers’ drinking water, and be used in cabooses for the convenience of freight-train crews.

When the railroad started cutting ice on the river in 1901, it was a big operation. A decade ago 35,000 tons were cut every winter. But modern refrigeration methods, especially milk tank cars that work on the principle of a Thermos bottle, have cut into the operation. When one of two storage houses burned down, it wasn’t rebuilt.

Even so, the New York Central is probably the biggest harvester of natural ice in the country nowadays. This winter the railroad expects to cut an estimated 12,000 tons of ice at Carthage and other cutting areas.

During severe winters, with three and four feet of snow on the ground and the temperature down to 20° below, 100 men and at least two teams of horses are needed to keep the work moving. Old-timers recall a record freeze when the ice was cut 32 inches thick, making individual cakes that weighed 736 pounds, or almost two-fifths of a ton for each chunk.

1. Icehouse has capacity of 7,000 tons. At far left is inclined conveyer that lifts the cakes to moving gallery. This runs outside the length of the building, carries the blocks to doors of storage rooms. Crew in foreground is splitting large floats into single cakes.

2. Horse-drawn scrapers are first on the job, cleaning snow off the ice. The sheet must be frozen to a thickness of at least 12 inches before the harvesting operation can begin.

To provide room to work, first cakes are sawed by hand. End of the field is located upstream from storage house so that river current can help move ice down to conveyers.

4. Gasoline-powered saws take over. Working in teams of two, one laterally and the other longitudinally, they cut cakes measuring 32 by 22 inches.. Blades bite 10 inches into the ice.

5. Floats of five cakes ride the channel. As these approach the conveyer, barring forks are used to split them through below the point reached by the saw, producing single cakes.

6. Man with pike urges the single cakes onto a conveyer that carries them up to a moving gallery that is adjusted upward as the ice storage house is filled higher and higher.

7. As the individual cakes move up, a planer shaves off slush and gives a rough surface to the ice for easier handling. Fourteen-inches of ice produce cakes weighing 322 pounds.

8. As the cakes move along the length of the icehouse, men with hooks stand at each of the eight entrances to the storage rooms and pull the cakes inward at the rate of one a minute.

9. At 10 miles an hour, the cakes slither down a chute to the packing crews. Keyman is the switcher, who must catch the quarter-ton blocks and guide them to where packers are working.