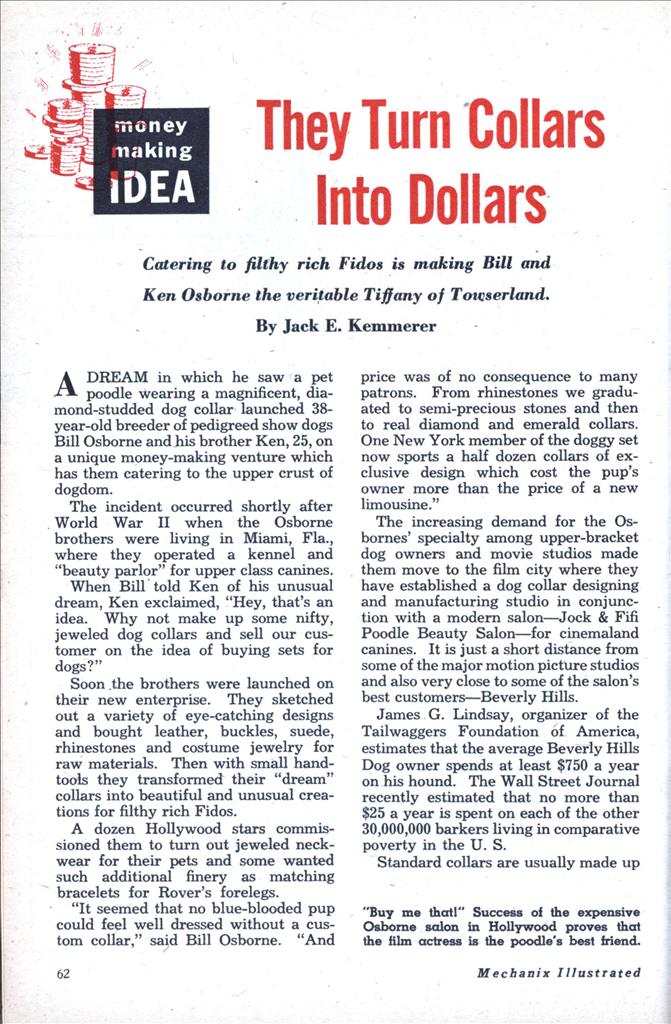 They Turn Collars Into Dollars

Catering to filthy rich Fidos is making Bill and Ken Osborne the veritable Tiffany of Towserland.

By Jack E. Kemmerer
A DREAM in which he saw a pet poodle wearing a magnificent, diamond-studded dog collar launched 38-year-old breeder of pedigreed show dogs Bill Osborne and his brother Ken, 25, on a unique money-making venture which has them catering to the upper crust of dogdom.

The incident occurred shortly after World War II when the Osborne brothers were living in Miami, Fla., where they operated a kennel and “beauty parlor” for upper class canines.

When Bill told Ken of his unusual dream, Ken exclaimed, “Hey, that’s an idea. Why not make up some nifty, jeweled dog collars and sell our customer on the idea of buying sets for dogs?”

Soon the brothers were launched on their new enterprise. They sketched out a variety of eye-catching designs and bought leather, buckles, suede, rhinestones and costume jewelry for raw materials. Then with small hand-tools they transformed their “dream” collars into beautiful and unusual creations for filthy rich Fidos.

A dozen Hollywood stars commissioned them to turn out jeweled neckwear for their pets and some wanted such additional finery as matching bracelets for Rover’s forelegs.

“It seemed that no blue-blooded pup could feel well dressed without a custom collar,” said Bill Osborne. “And price was of no consequence to many patrons. From rhinestones we graduated to semi-precious stones and then to real diamond and emerald collars. One New York member of the doggy set now sports a half dozen collars of exclusive design which cost the pup’s owner more than the price of a new limousine.”

The increasing demand for the Osbornes’ specialty among upper-bracket dog owners and movie studios made them move to the film city where they have established a dog collar designing and manufacturing studio in conjunction with a modern salon—Jock & Fifi Poodle Beauty Salon—for cinemaland canines. It is just a short distance from some of the major motion picture studios and also very close to some of the salon’s best customers—Beverly Hills.

James G. Lindsay, organizer of the Tailwaggers Foundation of America, estimates that the average Beverly Hills Dog owner spends at least $750 a year on his hound. The Wall Street Journal recently estimated that no more than $25 a year is spent on each of the other 30,000,000 barkers living in comparative poverty in the U. S.

Standard collars are usually made up in a set consisting of a matching collar and leash. If the owner is a woman she can complete the ensemble by wearing a matched jeweled belt also made by the Osborne brothers. These standard combination sets retail for about $7.50 and bring the Osbornes about $4.25 each wholesale.

Working by hand, Bill Osborne says that one person can turn out about 18 complete sets a day. Material cost is $1.25 per set, leaving a net of $3 per set if sold wholesale. This does not include the matching belt. This output can be greatly increased with leather cutting dies which the Osbornes use for many of their less expensive designs.

The one-of-a-kind, custom-designed jobs with semi-precious and precious stones have no set price, depending entirely on each individual collar. The Osbornes’ biggest job to date was an order for an 18-inch long, four-inch wide jeweled and gold encrusted ceremonial collar which an Oriental potentate ordered for his pet jaguar. It cost $2,500 and was made from special plans sent from New Delhi, India.

Bill and Ken prefer to keep even their less expensive finery on a more or less exclusive basis. To do this they sell retail through their salon. They also sell to a few exclusive department stores in the Los Angeles and Beverly Hills area.

With the demand for customized dog accoutrements continuing to grow, the Osbornes are in the process of adding a complete line of deluxe canine finish- ings such as zippered boots, colored flannel linings and a new terrycloth bathrobe—the last bark in dog finery.

In addition to sales of dog clothing, the Osbornes have their poodle beauty salon which does a howling business in the canine society set. Here a dog can get the works from a hair-do—cost $5 and up—to a shampoo and manicure. The full treatment for a poodle of its traditionally exotic coiffures, ordinarily runs in excess of $50 per setting.

The Osbornes figure that about 60 per cent of their annual business comes from their line of custom dog collars with last year’s total net exceeding $20,000 from all sources. They expect their new clothing line to make up another ten to 15 per cent.

If an individual wanted to start his own jeweled dog collar business he could do so for less than a $100 investment. A used sewing machine can be had for $25 and up. The hand tools for leather working can be purchased for as little as $10 or $15. The largest single outlay would be for jewels which could be purchased only as needed.

Bill and Ken think there’s a brilliant future ahead for the diamond dog collar and deluxe dog clothing industry. “Why, there’s at least 30,000,000 dogs in the U. S. and I would estimate about 500,000 of them are in this area,” Bill says. “We need only a small percentage of their owners as customers to make us the undisputed “Tiffany of Towserland.” •