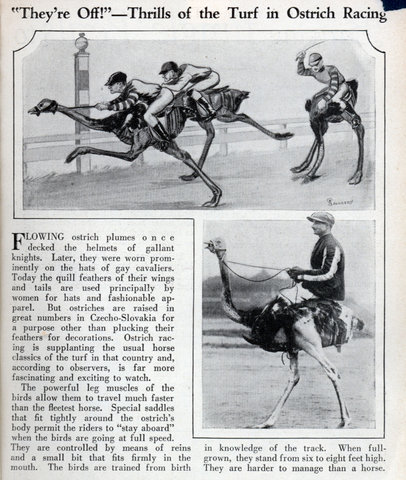 “They’re Off!”â€”Thrills of the Turf in Ostrich Racing

FLOWING ostrich plumes once decked the helmets of gallant knights. Later, they were worn prominently on the hats of gay cavaliers. Today the quill feathers of their wings and tails are used principally by women for hats and fashionable apparel. But ostriches are raised in great numbers in Czecho-Slovakia for a purpose other than plucking their feathers for decorations. Ostrich racing is supplanting the usual horse classics of the turf in that country and, according to observers, is far more fascinating and exciting to watch.

The powerful leg muscles of the birds allow them to travel much faster than the fleetest horse. Special saddles that fit tightly around the ostrich’s body permit the riders to “stay aboard” when the birds are going at full speed. They are controlled by means of reins and a small bit that fits firmly in the mouth. The birds are trained from birth in knowledge of the track. When full-grown, they stand from six to eight feet high. They are harder to manage than a horse.