THINKING MACHINES ARE GETTING SMARTER (Oct, 1958) 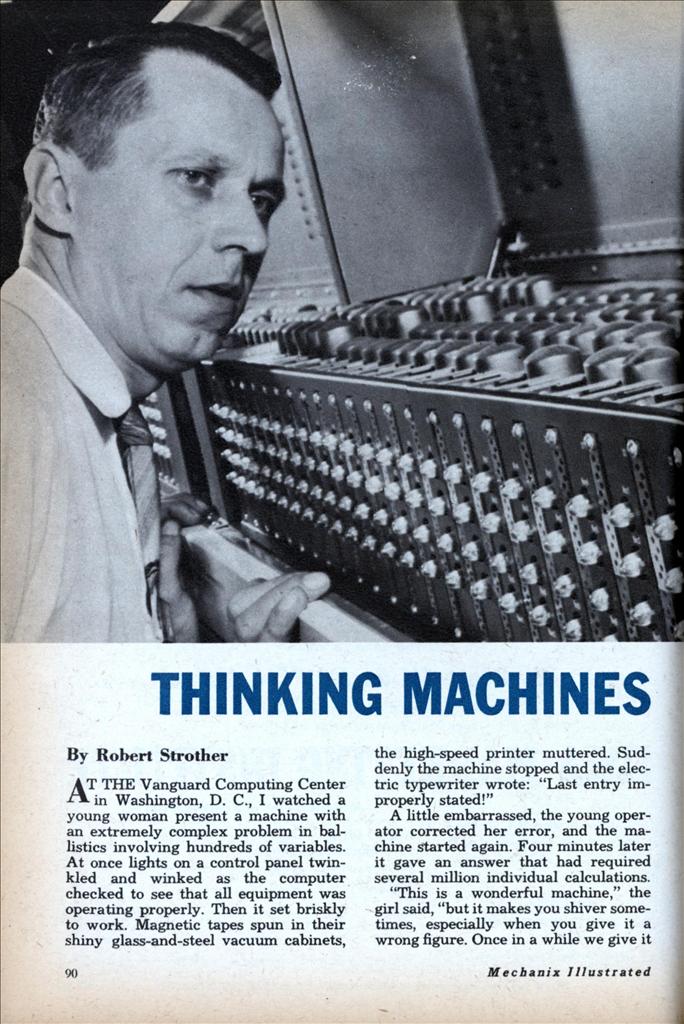 THINKING MACHINES ARE GETTING SMARTER

AT THE Vanguard Computing Center – in Washington, D. C, I watched a young woman present a machine with an extremely complex problem in ballistics involving hundreds of variables. At once lights on a control panel twinkled and winked as the computer checked to see that all equipment was operating properly. Then it set briskly to work. Magnetic tapes spun in their shiny glass-and-steel vacuum cabinets, the high-speed printer muttered. Suddenly the machine stopped and the electric typewriter wrote: “Last entry improperly stated!”

A little embarrassed, the young operator corrected her error, and the machine started again. Four minutes later it gave an answer that had required several million individual calculations.

“This is a wonderful machine” the girl said, “but it makes you shiver sometimes, especially when you give it a wrong figure. Once in a while we give it an incorrect figure on purpose—just to see it sneer at us.”

The machine was an IBM electronic computer—one of the new “giant brains” which differ from previous computing and tabulating machines in that they function with the speed of light— 186,000 miles per second. They can read, write and calculate simultaneously; they have tenacious “memories” and they can learn by experience. In the last half dozen years these electronic computers have come into wide use to perform miracles that touch the lives of all of us. Most commercial and scientific computer systems are huge affairs that fill a good-sized room which must be air-conditioned and dust-free. The largest digital computers cost from $500,000 to $4,000,000 each and yet they are being produced on an assembly-line basis by several companies. An idea of the complexity of the manufacturing job is given by a single statistic: there are 500,000 electrical connections in a giant computer.

Some machines are sold outright, some are rented, and some are available on a job basis, like a washing machine in a laundry center. Several computing service centers where problems are solved for a fee have been established by the leading U. S. producers in principal cities here and in Europe. Some of the more spectacular uses for computers are in national defense. A ballistic missile in flight, for example, must be in exactly the right position at precisely the right speed when the thrust is cut: An error of one foot per second in speed can cause a one-mile miss at the point of impact.

As it climbs a missile sends radio signals to a computer on the ground, informing it about variations in wind, fuel consumption, center of gravity, temperature, rotation of the earth and a score of other items. The computer figures the effect of these factors and instantly flashes instructions to keep the missile on course. When the great “bird” hits the right speed and is properly trimmed, the computer cuts the motor and the missile coasts at 14,000 miles an hour to its target. No human being could possibly work with the speed and accuracy required by this complex operation.

One of these machines has almost every one of us at its electronic fingertips: Computers at the Social Security Administration in Baltimore keep track of 160 million names and 1,750 billion dollars in wages. Formerly a change in a person’s name, or a transposed serial number, caused trouble. Now the computers know some 25 common sources of trouble—and search for them in order of probable occurrence. Correspondence in this, the world’s largest bookkeeping job, has been greatly reduced and the same staff can handle three times as many accounts.

One of the routine marvels computers are performing nowadays for business is the operation of the Boston home office of the John Hancock Mutual Life Insurance Company, where a Remington-Rand Univac II under the direction of five operators keeps all the records on two million policy accounts. The computer selects the accounts on which premiums are coming due, and calculates the amounts owed by matching data from magnetic tapes with premium and interest tables in its memory. It wraps up the job by printing out premium notices, ready for mailing, at the rate of 100 per minute.

Once a week it makes out the home office payroll, figuring income tax, bond purchase, health insurance and other deductions as it writes 7,500 checks an hour.

On the anniversary of each policy, the computer calculates cash values, dividends, loan interest due, or interest payable on accumulated dividends, and prints out a statement.

The present computers grew out of the early tabulating, calculating and teletype machines. Combined into one complete system, and speeded up by electronics, the most advanced of them can solve any problem that can be expressed in writing. Here, briefly, is how they work. An operator types information and instructions on a special typewriter that converts letters and numerals into a code of dots on a magnetic tape. The computer then “reads” these signals and sends them to its central “brain” or “memory”—which consists of thousands of pinhead-size iron doughnuts or cores, each linked electrically to all others.

This “memory” temporarily stores partial answers to a long problem until the computer’s ingenious circuits call them out at the right moment to complete the answers. It also permanently stores for repeated use such standard data as logarithm tables or withholding-tax figures. The actual calculating is then done on orders from an instruction tape that tells the computer precisely what to do with the stored information.

An involved problem may require thousands of steps, but computers make light work of it by performing 40,000 arithmetical operations per second. Electrons flash through the bewildering maze of up to 500,000 circuits and deliver the correct answers to a high-speed printer which types it out at speeds up to 900 lines a minute. The printers are versatile, too: they will express the answer in figures, plain language, or a diagram. And to top it all, the computer automatically checks the accuracy of its own answers. In rare cases of error—dust specks are the usual villains—the machine stops and refigures.

One of the most popular exhibits at the World’s Fair in Brussels is a computer that answers questions in any one of ten languages. The questions are about major historical events in any year from 4 B.C. to the present. A visitor calls out, in German for instance, the years 1480 and 1766. The operator enters these years and the language on the keyboard. In less than a second the machine’s electric typewriter begins printing, in German: “1480—Leonardo da Vinci invented the parachute. 1766—Mozart composed his first opera at the age of 11.”

When a concordance of the Revised Standard Version of the Bible was needed last year a computer was given the task: to identify and list by location and context the Bible’s 800,000 words. The 2,000-page Concordance that resulted contains 350,000 cross references. To prepare the previous Concordance took 30 years. After a few months of preparatory coding, the computer did the job in a few hours.

A computer demonstrated detective talents while indexing the Dead Sea Scrolls. The Concordance technique was used but in many cases the computer had to guess at letters or entire words missing from the crumbling old documents. It did this by analyzing the words preceding and follow- ing each gap. Then it scanned the thousands of index words to find the one that most nearly fitted the context. To test the accuracy of the method, portions of known text were blocked out and the partial sentences given the machine. It replaced correctly as many as five consecutive words.

The giant brain has also been set to work translating the current flood of scientific papers produced in a score of languages. First, every word in a sizable English dictionary is listed on tape under a code number. The Russian, French or German equivalents for each word are given the same number. Then, to translate from Russian to English, for example, a tape with the Russian code numbers is fed into the machine, which matches the numbers and prints out the English. In an early experiment, the computer was asked to translate the English saying “Out of sight, out of mind,” into Russian. The result was startling: “Invisible and insane.” Newer computers are much more sophisticated, and while human editing to rearrange awkward word sequences is still needed, the computer can make hundreds of rough translations in a day.

“Computers can be programmed to do almost any mental work a man can spell out,” says Dr. Alan Perlis, one of the mathematician-philosophers who have played key roles in extending the scope of computers. “Each generation of human pupils must be taught afresh, but once you’ve taught any single computer to perform a process, you’ve taught them all, and forever. After a method for solving a certain problem is successfully worked out, it becomes part of the huge library of machine methods now available to users everywhere.”

Manufacturers have been working to give computers larger and faster memories and greater flexibility; they also have sought to realize the goal expressed a decade ago by the late John von Neumann, a trail-blazer in computer development. “Computers must be able to modify their behavior on the basis of their experience,” he said. One of the scientists tackling this problem is Dr. A. L. Samuel, who has taught an electronic computer to play checkers. This has a serious purpose: to train the machine to learn by experience.

The first step was to number the 32 checkerboard squares and the 12 men on each side. Then into the computer’s brain went a few thousand plays, selected from books written by experts—a half-dozen promising moves for every situation. A few instructions were added, and it was ready. The computer politely gives its human opponent the choice of colors, then prints out “Ml 12 16″—indicating the machine’s first move is piece 12 into square 16. Its human opponent replies by punching out the numbers of his play on a card which he gives to the computer.

The machine now runs over all plays open to it. It “mentally” makes a move, calculates what would be the best response for its opponent, figures its next probable move in that case, then the probable reply to that. It carries this procedure forward six steps before printing out the play it has selected. It does all this in 15 seconds and then waits—humming quietly —for its opponent’s next move.

The checker-playing computer keeps every move of every game stored in its “memory,” and it displays uncanny powers: it will sacrifice a piece to gain a future advantage; and it marks the plays that have led to losing games. When it next encounters the same situation, it selects a different move from its repertoire. The result is that it shows improvement in almost every game, and now easily defeats anyone except a real expert. To watch it print: “EXPECT TO WIN IN FIVE MOVES” gives some observers an uneasy feeling.

Computer men, thrilled by the powers of the genie they have created, like to speculate on the tremendous promise it holds for human advancement. “Computers open up scientific possibilities that were unthinkable before,” says Ralph J. Cordiner, Chairman of the Board of General Electric Co. “They will make possible entirely new products and industries. These computer-derived technologies will be a major source of new employment in the coming decades.”

Such leaders as Dr. Simon Ramo of Ramo-Wooldridge believe that the computer, by making vast new areas of knowledge manageable, and by directing operations too fast or too complex and requiring too much speed for a man to handle, will prove to be the most valuable of all the developments of these fast-moving times. No man can foretell what the future holds, but there is no doubt that many of our questions about it will be answered with the speed of light. •