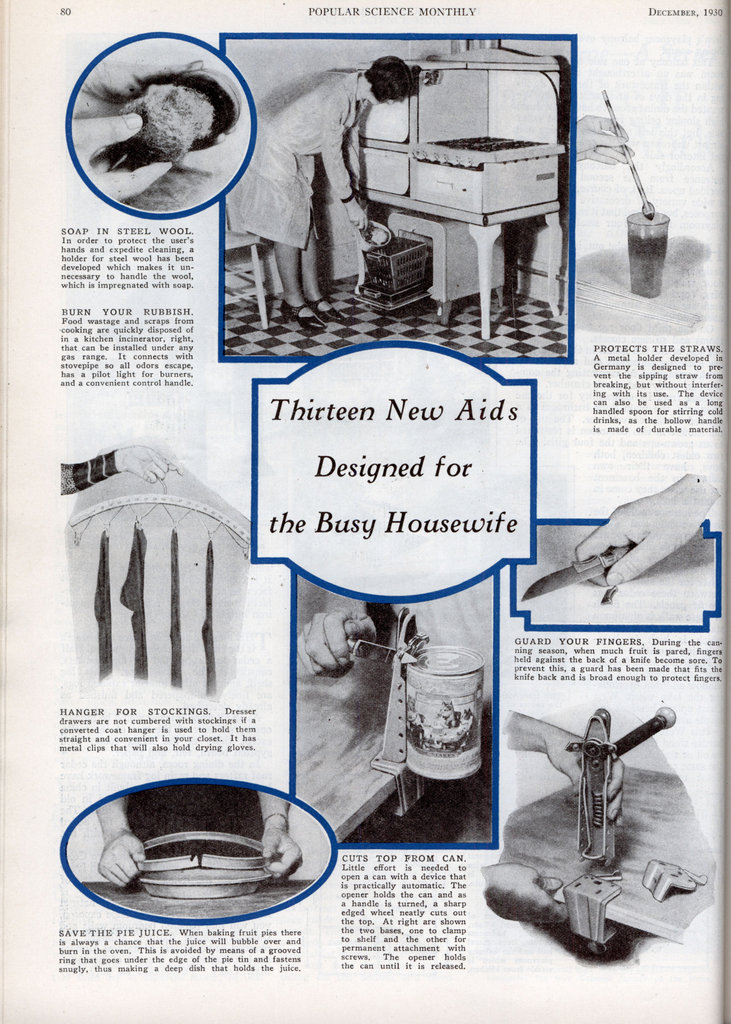 SOAP IN STEEL WOOL. In order to protect the user’s hands and expedite cleaning, a holder for steel wool has been developed which makes it unnecessary to handle the wool, which is impregnated with soap.

BURN YOUR RUBBISH. Food wastage and scraps from cooking are quickly disposed of in a kitchen incinerator, right, that can be installed under any gas range. It connects with stovepipe so all odors escape, has a pilot light for burners, and a convenient control handle.

HANGER FOR STOCKINGS. Dresser drawers are not cumbered with stockings if a converted coat hanger is used to hold them straight and convenient in your closet. It has metal clips that will also hold drying gloves.

SAVE THE PIE JUICE. When baking fruit pies there is always a chance that the juice will bubble over and burn in the oven. This is avoided by means of a grooved ring that goes under the edge of the pie tin and fastens snugly, thus making a deep dish that holds the juice.

PROTECTS THE STRAWS. A metal holder developed in Germany is designed to prevent the sipping straw from breaking, but without interfering with its use. The device can also be used as a long handled spoon for stirring cold drinks, as the hollow handle is made of durable material.

GUARD YOUR FINGERS. During the canning season, when much fruit is pared, fingers held against the back of a knife become sore. To prevent this, a guard has been made that fits the knife back and is broad enough to protect fingers.

COOKS WITH ELECTRIC LAMPS. Two standard 150-watt lamp bulbs, in top and bottom of a new electric stove, give heat enough to cook a whole meal in three hours. Insulated walls retain the warmth. A pan attachment in the top bakes muffins.

READY TO USE. Assembled, the novel electric lamp stove plugs into any outlet. Indicators on the side show whether bulbs are lit, and a switch regulates the heat to permit either rapid or gradual cooking.

COFFEE TABLE. This folding table can be used in serving coffee, but the trays are removable and legs fold.

TOASTS BOTH SIDES. This electric toaster stands solidly on the table and with heat above and below, it toasts both sides of bread at once. No odors escape.

CLOSET HAT HOLDER. No screws are needed to fasten this hatrack to the shelves. A coiled wire base slips over edge of shelf, as seen in photograph at left.

KEEPS GLOVES IN SHAPE. Something new in a wooden glove form has just appeared. The thumb is detachable and can be adjusted to any length of thumb, thereby making it possible for the form to give to the glove a natural shape, thus improving its appearance.

TWO PIECES OF FURNITURE IN ONE. This table is opened and ready to serve as a luggage rack in the guest’s room. Above to left it is seen as a coffee table. It folds compactly.