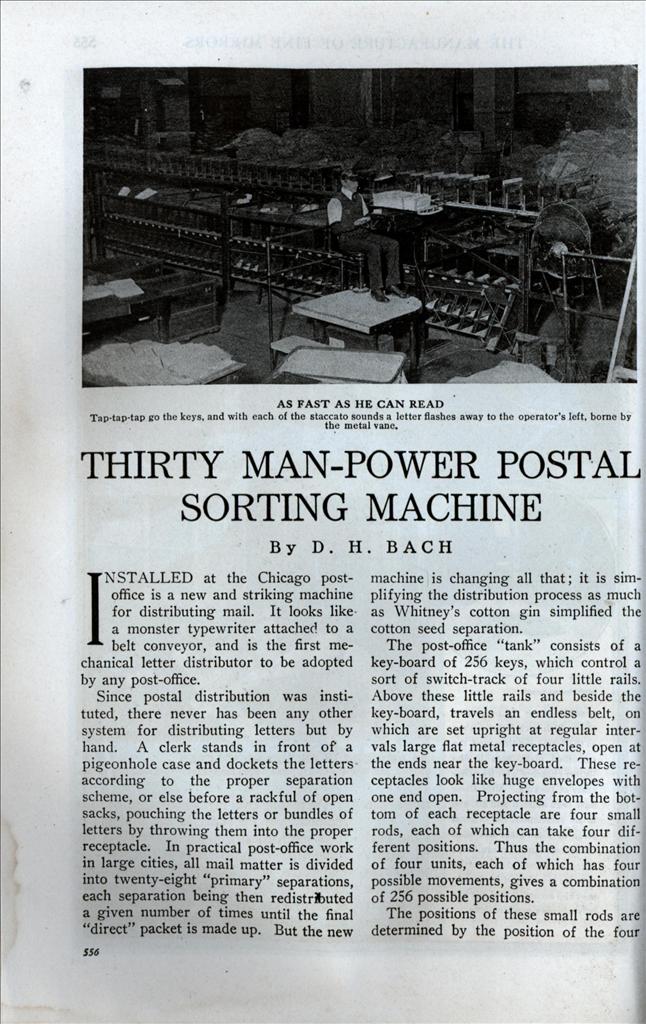 INSTALLED at the Chicago post-office is a new and striking machine for distributing mail. It looks like a monster typewriter attached to a belt conveyor, and is the first mechanical letter distributor to be adopted by any post-office.

Since postal distribution was instituted, there never has been any other system for distributing letters but by hand. A clerk stands in front of a pigeonhole case and dockets the letters according to the proper separation scheme, or else before a rackful of open sacks, pouching the letters or bundles of letters by throwing them into the proper receptacle. In practical post-office work in large cities, all mail matter is divided into twenty-eight “primary” separations, each separation being then redistributed a given number of times until the final “direct” packet is made up. But the new machine is changing all that; it is simplifying the distribution process as much as Whitney’s cotton gin simplified the cotton seed separation.

The post-office “tank” consists of a key-board of 256 keys, which control a sort of switch-track of four little rails. Above these little rails and beside the key-board, travels an endless belt, on which are set upright at regular intervals large flat metal receptacles, open at the ends near the key-board. These receptacles look like huge envelopes with one end open. Projecting from the bottom of each receptacle are four small rods, each of which can take four different positions. Thus the combination of four units, each of which has four possible movements, gives a combination of 256 possible positions.

The positions of these small rods are determined by the position of the four levers of the switchtrack mentioned above, and this, in turn, is controlled by the 256 keys of the man-operated typewriter key-board.

The operator sits in front of the keyboard. The letters are stacked before him automatically. He reads the address on the front envelope, depresses the corresponding key, and this key shoots the letter from the front of the stack on to a moving vane which fans the letter into the side opening of one of the metal receptacles. At the same time the depression of the key has set the switch-\track. This shifts the rods on the bottom of the receptacle to the proper position, so that it will open out and drop the contained letter into the proper pigeonhole beneath. Shooting away the top letter, of course, exposes the next letter, and so forth, until all are taken care of. An employe runs a separate jogging and facing machine which keeps constant the supply of letters.

There are two big advantages of this method over the old. In the first place, it is mechanically much faster than the hand-distribution of letters. In the second place, with 256 primary separations instead of 28, it is possible to eliminate at least sixty per cent of the rehandling and redistribution which letters now receive.