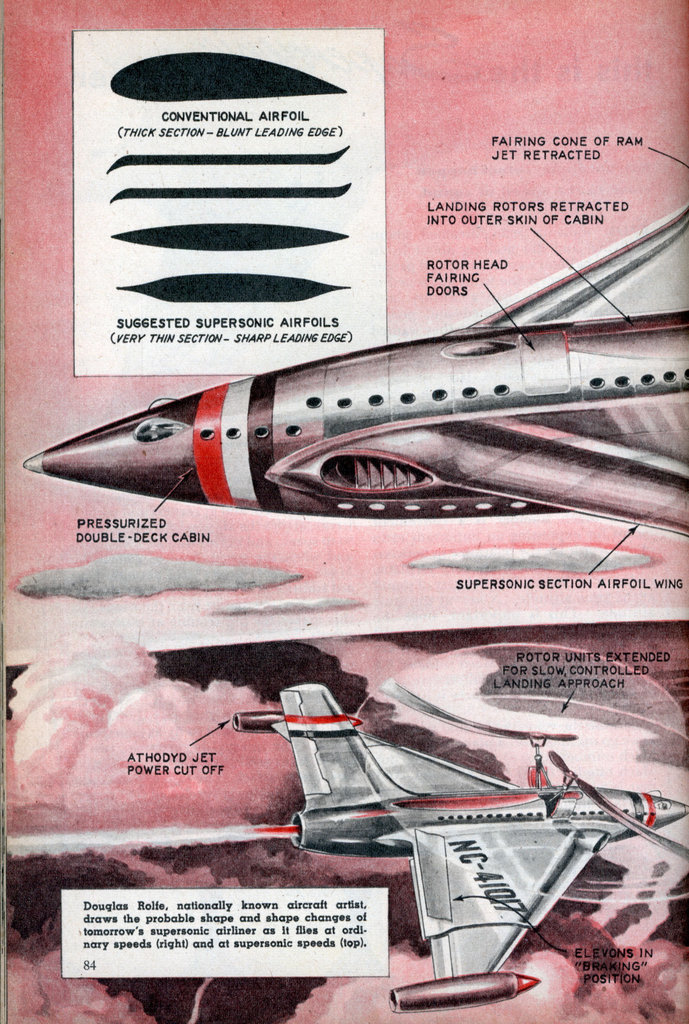 This is the Supersonic Barrier

Extraordinary things happen close to the speed of sound.

FOR millenia man dreamed about flyingâ€”and did nothing about it. In 1783 the balloon was invented and people could fly wherever the wind happened to blow them. More than a century later the airplane was inventedâ€”and people began to be able to fly where they wanted to go.

Now, forty-four years later, man wants to fly faster than sound. He will do it. Aeronautical science is close to this goal; it may take only a year or two. But there are difficulties, and most, of them are tied up with something which is called a Mach number. (The term honors the Austrian physicist Dr. E. Mach, who was one of the first to investigate the problems of air resistance at high speeds.)

Because the velocity of sound decreases as we go up in the air, a plane might have Mach number 0.5 at or near sea level, but Mach number 0.7 at high altitudes. And that is where the difficulties start. When its Mach number approaches 0.7 the air begins to behave differently. Instead of smoothly flowing around the wing it tries to pile up, and at corners and surface irregularities the air gets into its own way, so to speak, and builds into a shock wave; and when the speed (and of course the Mach number) grows large enough there are additional shock waves where the airflow begins to separate from the wings. All this makes for big trouble at trans-sonic speeds.

At this point we’d better define a few terms. At Mach numbers of 0.65 or less (about 500 mph or less) airplanes are said to fly at subsonic speeds. At Mach numbers of 1.3 or higher (say, 1,000 mph and up) they are said to fly at supersonic speeds. The interval between the two is called trans-sonic, and that is the region now under attack. The fastest planes are already in the lower reaches of that range. The Mustang and a few other propeller-driven fighters had Mach number 0.6. The jet planes hit Mach 0.7 and the British “Meteor” and the German “Komet” (Me-163) got to Mach 0.8.

An airplane is dependent on airflow, especially the flow around the wings. As long as the speed is low, Mach number 0.5 or less, there is a smooth flow around wings and fuselage; or, rather, it is possible to design wings and fuselage in such a manner that the airflow is not noticeably disturbed. But when the speed goes up, shock waves begin to form, first in corners, then even along the wing, and when the process has gone far enough the airplane just can’t fly any more. ; The formation of shock waves eats up energy which should be used for propulsion. This could be overcome with additional engine power, except for one thing: the shock waves forming on the wings directly destroy the lift of the wings, the wings lose their power to sustain the plane in the airâ€”and the pilot finds himself confronted with “shock stall.”

The arrangement of the wings seems to be almost as important as their shape. Carefully contrived experiments seem to favor a sweepback which would have been thought ridiculous only a few years ago. Strong taper also seems indicated.

As for the leading edge itself, it is well established that it must be sharp.

There is another very important factor. If the plane is fast enough there certainly will be shock waves somewhere, no matter how carefully everything has been designed. Now, a shock wave originating anywhere on the plane is bad enough as a source of energy loss even if it just travels out into the open air, but things get much worse if it can hit another part of the plane. This will not only lead to additional losses but can actually cause structural damage.

Keeping all these problems in mind, the picture of the future trans-sonic and supersonic airplane emerges about as follows: the fuselage will have a circular or near circular cross section and the cross section will be as small as possible. The nose will taper to a sharp point, like the nose of a high-velocity projectile. The wings will be attached relatively far back on the fuselage. They will have a sweepback of about 60 degrees and, in all probability, will be strongly tapered. They will be very thin in cross section, with a ratio between thickness and chord of maybe as little as 6 to 8 percent. The tail assembly will have to be placed in such a manner that it is out of the way of any shock waves that will form in front. Propulsion will be by means of a jet engine or liquid fuel rocket motor, located in the extreme tail end, if at all possible.

What makes the problem of wing design for a supersonic plane so difficult is that, while the matter of strength is critical, to say the least, there is so very little room for the internal bracing of the thin wing required. There can be no external bracing, for each external brace would add its quota of shock waves.

Another difficulty connected with the wing is the question of what it would do at low speeds. It is probable that a wing which has maximum excellence at Mach number 0.7 and higher will be inefficient at Mach number 0.5, and very poor still lower. Every airplane has to spend some time at relatively low speedsâ€”the time taken in takeoff and landing. It may be that the takeoff troubles of a wing which is poor at low speeds will be circumvented by using a jet engine or rocket motor powerful enough to lift the plane and bring it up to speed regardless of poor wing performanceâ€”but there would still be the difficulty of landing.

Man will no doubt get his wish of flying faster than sound. We already recognize many of the difficulties between us and that goal. We no longer think them insurmountable, but there’s no doubt that they are big.