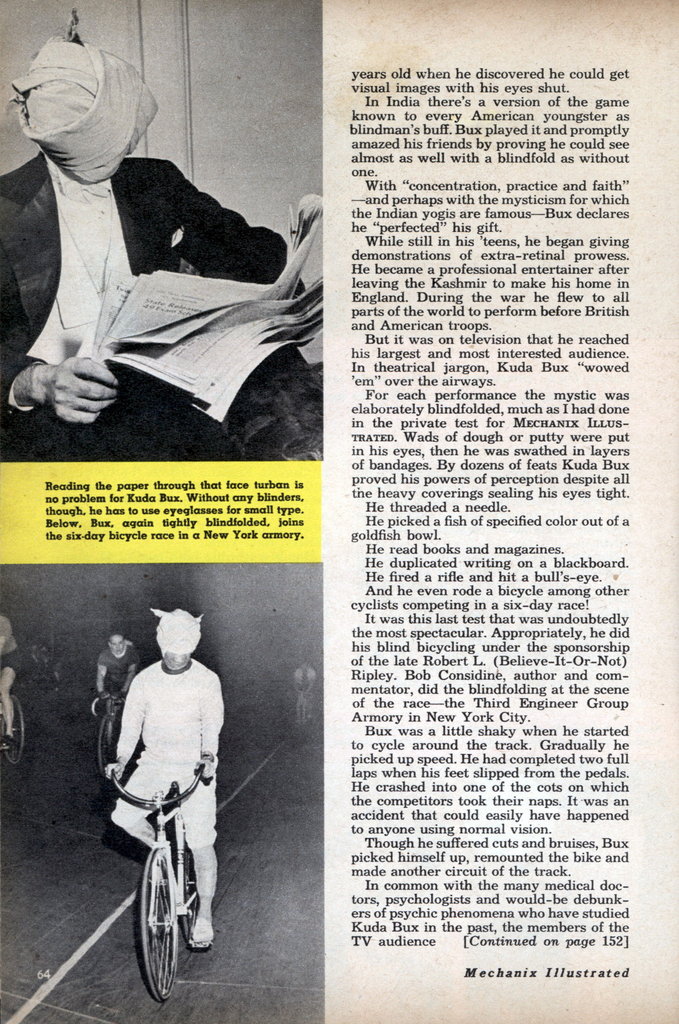 This Man Has X-ray Eyes!

I picked up a piece of chalk, walked to the blackboard and scribbled “Mechanix Illustrated.” Kuda Bux, the Indian mystic, accepted the chalk from me and wrote the title of this magazine again. Not only that, he copied my handwriting.

“You shouldn’t forget to dot the i,” he admonished.

I pulled a dime out of my pocket and held it in the palm of my hand.

I handed him the noon edition of a newspaper. It had just hit the street. He couldn’t possibly have seen it before.

Without hesitating, Bux read the headlines on the front page, then some of the lead stories. He turned to the financial section and rattled off a list of stock quotations.

Easy? Nothing to it? Sureâ€”except that during all these tests Kuda Bux was blind-folded!

There wasn’t a chance for him to use his eyes. I’d made sure of that. First I put a wad of baker’s dough in each eye. I covered these wads with thick sections of cotton batting, which I bound tightly in place with several yards of surgical bandage. Then I tied five towels securely around his face and head. He looked like a hospital. case who had barely survived a major auto accident.

Nor was there any possibility that he had an accomplice. We were alone in his hotel room on upper Broadway in New York City. Any sort of trickery seemed absolutely out of the question.

Kuda Bux has been called a yogi, a mentalist and an Indian fakir. Probably the most fitting label for him is “The Man with the X-ray Eyes.” For more than 20 years he has astonished theater audiences in Canada, England and on the Continent with his feats of “extra-retinal vision” (or “seeing without eyes”). Recently he baffled millions of American television viewers when he filled a 13-week engagement on WNBT, New York.

Bux is a sturdily built man of 43, somewhat under average height, with a swarthy complexion and a neatly trimmed mustache. His most striking feature are those black, penetrating eyes staring at you from the opposite pageâ€”the eyes he doesn’t need for seeing.

A native of Ahknur in India’s Kashmir Valley and the son of a respected government official, Bux says he was about 12 years old when he discovered he could get visual images with his eyes shut.

In India there’s a version of the game known to every American youngster as blindman’s buff. Bux played it and promptly amazed his friends by proving he could see almost as well with a blindfold as without one.

With “concentration, practice and faith” â€”and perhaps with the mysticism for which the Indian yogis are famousâ€”Bux declares he “perfected” his gift.

While still in his ‘teens, he began giving demonstrations of extra-retinal prowess. He became a professional entertainer after leaving the Kashmir to make his home in England. During the war he flew to all parts of the world to perform before British and American troops.

But it was on television that he reached his largest and most interested audience. In theatrical jargon, Kuda Bux “wowed ’em” over the airways.

For each performance the mystic was elaborately blindfolded, much as I had done in the private test for Mechanix Illustrated. Wads of dough or putty were put in his eyes, then he was swathed in layers of bandages. By dozens of feats Kuda Bux proved his powers of perception despite all the heavy coverings sealing his eyes tight.

He threaded a needle.

He picked a fish of specified color out of a goldfish bowl.

He read books and magazines.

He duplicated writing on a blackboard.

He fired a rifle and hit a bull’s-eye.

And he even rode a bicycle among other cyclists competing in a six-day race!

It was this last test that was undoubtedly the most spectacular. Appropriately, he did his blind bicycling under the sponsorship of the late Robert L. (Believe-It-Or-Not) Ripley. Bob Considine, author and commentator, did the blindfolding at the scene of the raceâ€”the Third Engineer Group Armory in New York City.

Bux was a little shaky when he started to cycle around the track. Gradually he picked up speed. He had completed two full laps when his feet slipped from the pedals. He crashed into one of the cots on which the competitors took their naps. It was an accident that could easily have happened to anyone using normal vision.

Though he suffered cuts and bruises, Bux picked himself up, remounted the bike and made another circuit of the track.

In common with the many medical doctors, psychologists and would-be debunk-ers of psychic phenomena who have studied Kuda Bux in the past, the members of the TV audience gasped: “We see it but we don’t believe it!”

And yet this Indian mystic’s feats have to be believed!

On city streets both in England and Canada, Bux has driven automobiles for considerable distances while blindfoldedâ€”and without once getting a traffic ticket! Of course, it’s a snap for him to play bridge or billiards while his eyes are covered. And at both games he does far better than most players who are using both eyes without any blinders. Bux’ mysterious X-ray eyes won’t penetrate everything. I learned this in my interview with him when I pulled out my driver’s registration card but put my hand over it.

He makes no claim to be able to see through a brick wall. Nor can he see through clothing, in case you were wondering.

Just to make things a little more confusing, Bux needs glassesâ€”specs with heavy horn rimsâ€”for reading fine type, such as in a telephone directory, when he is not putting on his blindfold act. This business of seeing without eyes is just one of many things the versatile Bux can do, thanks to his yogi mysticism.

How does Kuda Bux come by his extraordinary powers? Dr. J. B. Rhine, head of the Parapsychology Laboratory at Duke University, told of his remarkable experiments in extra-sensory perception in How Good Are Your Hunches? in the April issue of MI. One clairvoyant student, you recall, named 25 successive cards correctly without seeing them. But none of the Duke clairvoyance experiments reveals such amazing insight as Kuda Bux shows in any of his blindfold tests.

The mystic himself is reluctant to give any explanation beyond referring to his “concentration, practice and faith”â€”and the development of a sixth senseâ€”what Dr. Rhine calls E.S.P.

“You must never underestimate the power and knowledge of man,” Kuda Bux declares. “With yogi, the development of physical, mental, spiritual and moral faculties of the mindâ€”all things are possible.”

Bux is now working on the matter of levi-tationâ€”-the ability to soar off the ground. He wants to “train himself to lie suspended in the air, defying the law of gravity. And who is there to say that he won’t some day succeed? Haven’t you ever heard of the Indian rope trick?

Seeing Kuda Bux perform those amazing stunts with his carefully blindfolded X-ray eyes is believing that he can defy the laws of nature and really do the impossible.