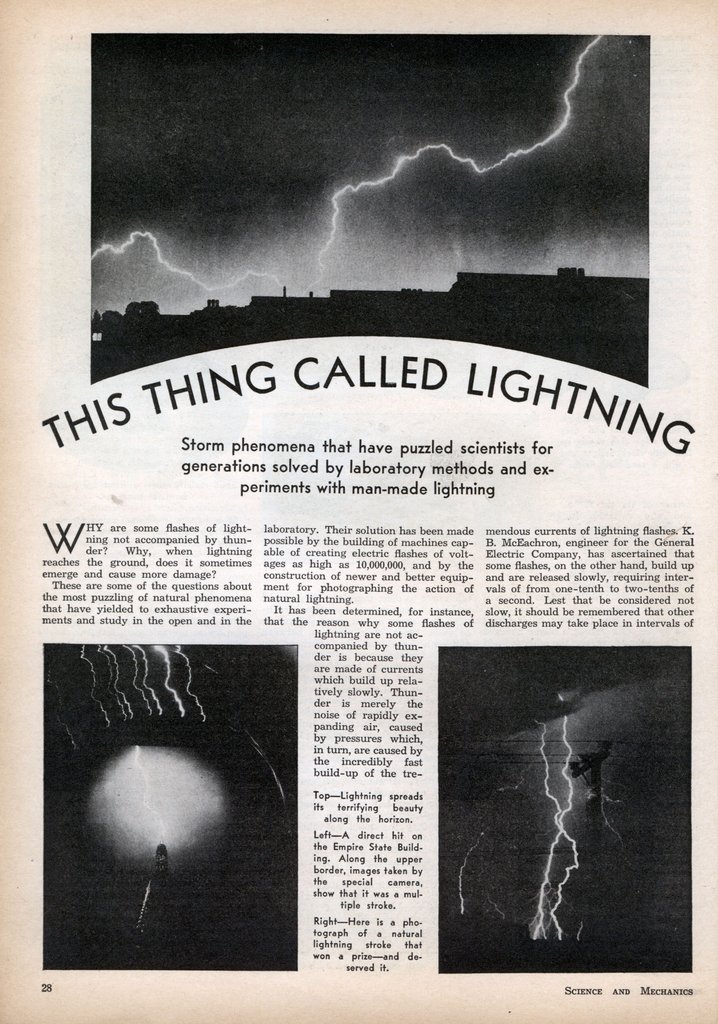 Storm phenomena that have puzzled scientists for generations solved by laboratory methods and experiments with man-made lightning.

WHY are some flashes of lightning not accompanied by thunder? Why, when lightning reaches the ground, does it sometimes emerge and cause more damage?

These are some of the questions about the most puzzling of natural phenomena that have yielded to exhaustive experiments and study in the open and in the laboratory. Their solution has been made possible by the building of machines capable of creating electric flashes of voltages as high as 10,000,000, and by the construction of newer and better equipment for photographing the action of natural lightning.

It has been determined, for instance, that the reason why some flashes of lightning are not accompanied by thunder is because they are made of currents which build up relatively slowly. Thunder is merely the noise of rapidly expanding air, caused by pressures which, in turn, are caused by the incredibly fast build-up of the tremendous currents of lightning flashes. K. B. McEachron, engineer for the General Electric Company, has ascertained that some flashes, on the other hand, build up and are released slowly, requiring intervals of from one-tenth to two-tenths of a second. Lest that be considered not slow, it should be remembered that other discharges may take place in intervals of as short as a millionth of a second. Hence it will be seen that the rapid flash takes place 100,000 times faster than the slower.

Looks the Same Slow flashes, unaccompanied by thunder, do not look less bright to the human eye than the more rapid flashes, because, after all, the human eye is not keyed to detect a great deal of difference between one-tenth and one-millionth of a second and the total brightness is the same. However, as may well be imagined, the slower flash is not so destructive as the faster one. Although a flash of thunder-less lightning struck the Washington Monument as long ago as 1885, it remained for modern experiments to furnish the explanation.

Crashes and Rolls MsEachron declares that most thunder does not reach the ear as a single crack because sound travels at the rate of approximately 1100 feet a second, and one portion of a lightning discharge in the clouds may be six seconds away from the earth, whereas that portion near the earth may be only one second away. There are often, also multiple discharges appearing as a single flash to the eye. As many as 40 discharges have been recorded in a single second of time.

Such lightning produces a ripping or tearing peal of thunder because the rapid succession of flashes produces sound waves which reach the ear at short intervals. In addition, reflections of sounds by clouds, hills and buildings tend to increase the echo effect.

The- Path of Lightning Other experiments have shown that, if lightning strikes the earth where the soil happens to be of gravel or of a poor conductor type, it may bounce out again and work further destruction until it finds a suitable conductor. In a recent case, where a boy inside a house was killed by lightning, McEachron traced the discharge. He found it had first struck a tree 37 feet from the house, stripped off the bark as it traveled down to the base and followed a root of the tree for a few feet. Then a small stream caused by the rain carried it to the foundation of the house. Here it tore off a patch of tar-paper along the foundation, came up through the floor and a bed and passed through the boy’s foot, up his body and left by way of his chest to an aluminum cook pan hanging from a shelf but an inch or two from his body. It next jumped to a radio antenna strung under the eaves and then to an electric light lead just inside the building. From this, it traveled over the electric light wires out the building to a nearby building in which the cord from a desk telephone was hanging over the metal part of a bridge lamp. It then entered the telephone system and dissipated itself to the ground over the lightning arresters connected with that system.

“Well-grounded lightning rod systems will protect buildings against damage from lightning in the majority of cases,” says McEachron, “and the persons in such buildings will in general be safe.”