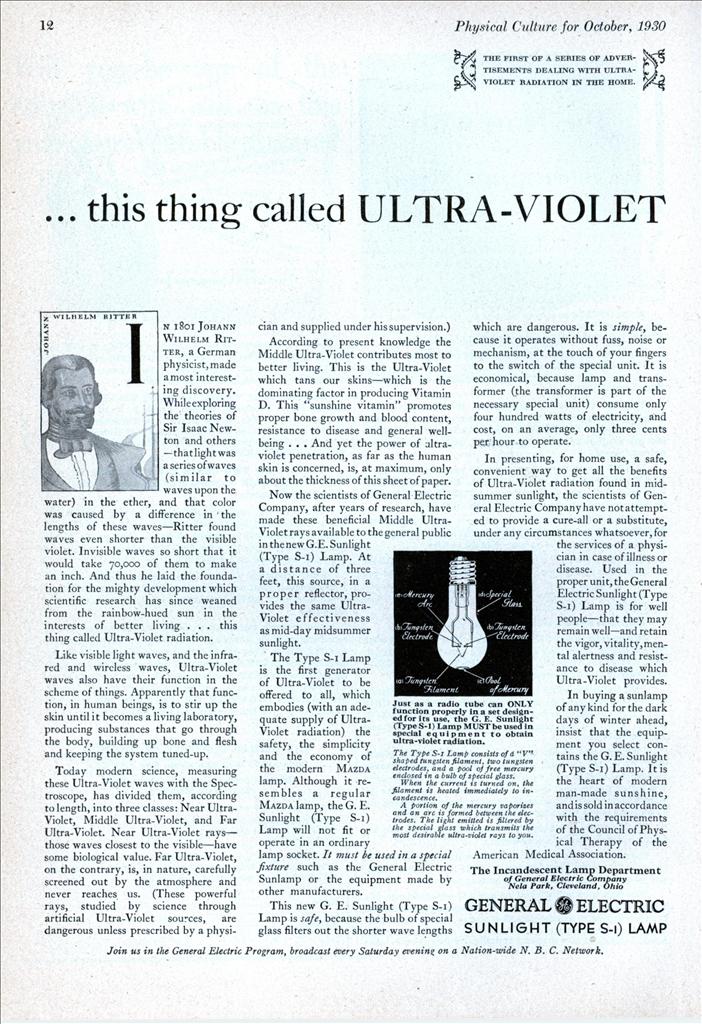 In 1801 Johann Wilhelm Ritter, a German physicist, made a most interesting discovery. While exploring the theories of Sir Isaac Newton and others —that light was a series of waves (similar to waves upon the water) in the ether, and that color was caused by a difference in the lengths of these waves—Ritter found waves even shorter than the visible violet. Invisible waves so short that it would take 70,000 of them to make an inch. And thus he laid the foundation for the mighty development which scientific research has since weaned from the rainbow-hued sun in the interests of better living . . . this thing called Ultra-Violet radiation.

Like visible light waves, and the infrared and wireless waves, Ultra-Violet waves also have their function in the scheme of things. Apparently that function, in human beings, is to stir up the skin until it becomes a living laboratory, producing substances that go through the body, building up bone and flesh and keeping the system tuned-up.

Today modern science, measuring these Ultra-Violet waves with the Spectroscope, has divided them, according to length, into three classes: Near Ultra-Violet, Middle Ultra-Violet, and Far Ultra-Violet. Near Ultra-Violet rays— those waves closest to the visible—have some biological value. Far Ultra-Violet, on the contrary, is, in nature, carefully screened out by the atmosphere and never reaches us. (These powerful rays, studied by science through artificial Ultra-Violet sources, are dangerous unless prescribed by a physician and supplied under his supervision.) According to present knowledge the Middle Ultra-Violet contributes most to better living. This is the Ultra-Violet which tans our skins—which is the dominating factor in producing Vitamin D. This “sunshine vitamin” promotes proper bone growth and blood content, resistance to disease and general well-being . . . And yet the power of ultraviolet penetration, as far as the human skin is concerned, is, at maximum, only about the thickness of this sheet of paper.

Now the scientists of General Electric Company, after years of research, have made these beneficial Middle Ultra-Violet rays available to the general public in the new G.E. Sunlight (Type S-i) Lamp. At a distance of three feet, this source, in a proper reflector, provides the same Ultra-Violet effectiveness as mid-day midsummer sunlight.

The Type S-i Lamp is the first generator of Ultra-Violet to be offered to all, which embodies (with an adequate supply of Ultra-Violet radiation) the safety, the simplicity and the economy of the modern Mazda lamp. Although it resembles a regular Mazda lamp, the G. E. Sunlight (Type S-i) Lamp will not fit or operate in an ordinary lamp socket. It must be used in a special fixture such as the General Electric Sunlamp or the equipment made by other manufacturers.

This new G. E. Sunlight (Type S-i) Lamp is safe, because the bulb of special glass filters out the shorter wave lengths which are dangerous. It is simple, because it operates without fuss, noise or mechanism, at the touch of your fingers to the switch of the special unit. It is economical, because lamp and transformer (the transformer is part of the necessary special unit) consume only four hundred watts of electricity, and cost, on an average, only three cents per hour to operate.

In presenting, for home use, a safe, convenient way to get all the benefits of Ultra-Violet radiation found in midsummer sunlight, the scientists of General Electric Company have not attempted to provide a cure-all or a substitute, under any circumstances whatsoever, for the services of a physician in case of illness or disease. Used in the proper unit, the General Electric Sunlight (Type S-i) Lamp is for well people—that they may remain well—and retain the vigor, vitality, mental alertness and resistance to disease which Ultra-Violet provides. In buying a sunlamp of any kind for the dark days of winter ahead, insist that the equipment you select contains the G. E. Sunlight (Type S-i) Lamp. It is the heart of modern man-made sunshine, and is sold in accordance with the requirements of the Council of Physical Therapy of the American Medical Association.