Popular Science
Issue: May, 1945
Posted in: Automotive, History, Origins
2 Comments on THIS WAS GERMANY’S FLIVVER (May, 1945) 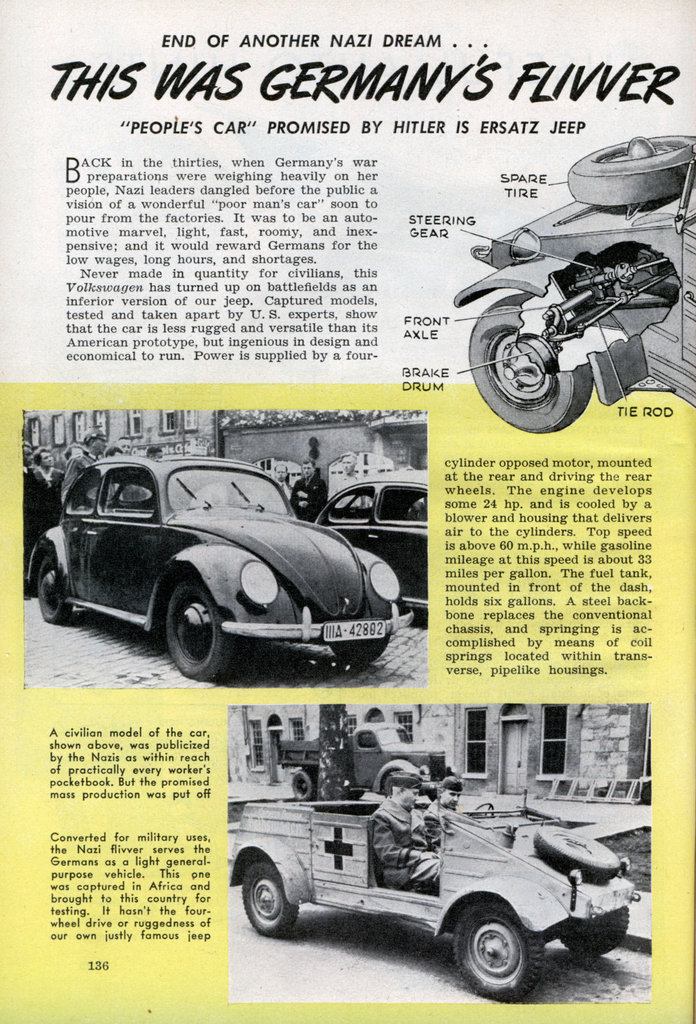 END OF ANOTHER NAZI DREAM . . .
THIS WAS GERMANY’S FLIVVER
“PEOPLE’S CAR” PROMISED BY HITLER IS ERSATZ JEEP

BACK in the thirties, when Germany’s war preparations were weighing heavily on her people, Nazi leaders dangled before the public a vision of a wonderful “poor man’s car” soon to pour from the factories. It was to be an automotive marvel, light, fast, roomy, and inexpensive; and it would reward Germans for the low wages, long hours, and shortages.

Never made in quantity for civilians, this Volkswagen has turned up on battlefields as an inferior version of our jeep. Captured models, tested and taken apart by U. S. experts, show that the car is less rugged and versatile than its American prototype, but ingenious in design and economical to run. Power is supplied by a four-cylinder opposed motor, mounted at the rear and driving the rear wheels. The engine develops some 24 hp. and is cooled by a blower and housing that delivers air to the cylinders. Top speed is above 60 m.p.h., while gasoline mileage at this speed is about 33 miles per gallon. The fuel tank, mounted in front of the dash, holds six gallons. A steel backbone replaces the conventional chassis, and springing is accomplished by means of coil springs located within transverse, pipelike housings.