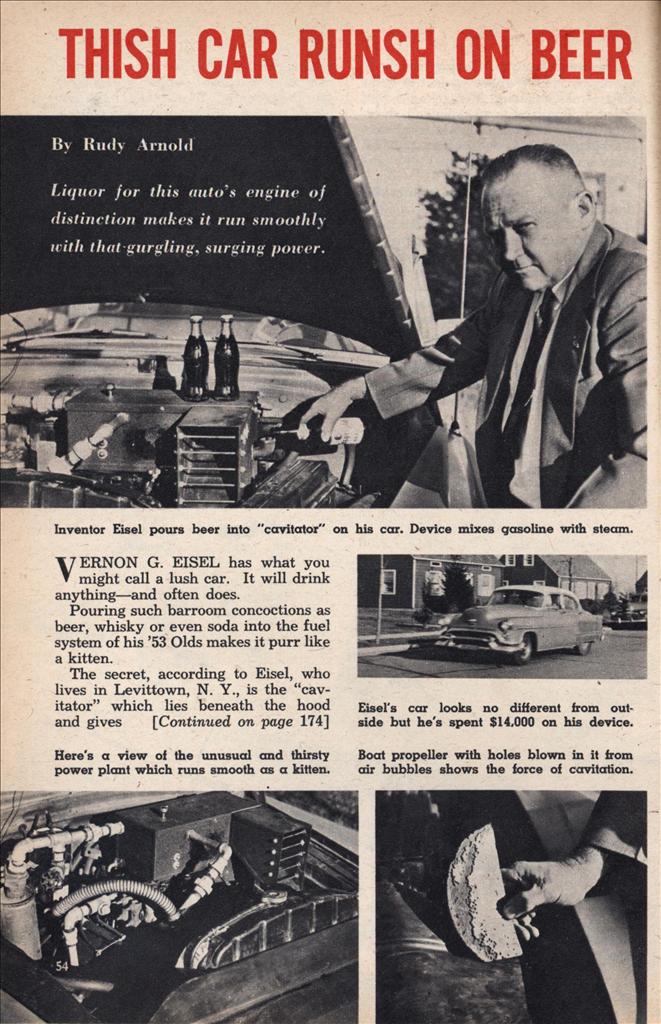 Liquor for this auto’s engine of distinction makes it run smoothly with that gurgling, surging power.

VERNON G. EISEL has what you might call a lush car. It will drink anything—and often does.

Pouring such barroom concoctions as beer, whisky or even soda into the fuel system of his ’53 Olds makes it purr like a kitten.

The secret, according to Eisel, who lives in Levittown, N. Y., is the “caveator” which lies beneath the hood and gives the car its gurgling, surging power.

Eisel normally pours water into the cavitator which functions satisfactorily on almost any liquid that can be turned into steam. Made with standard steam fittings and connected to the carburetor, Eisel claims his cavitator mixes vapor bubbles and gasoline in the carburetor. The exploding force of the bubbles, added to the force of the gasoline exploding in the cylinders, increases the engine’s power, he says.

When his cavitator is perfected, predicts Eisel, it will eliminate the need for an oil or air filter. You will never have to grind valves or clean spark plugs because there won’t be any carbon deposits and your engine will run smoother and with more power. Eisel claims he gets 25 per cent increase in gas mileage and from 25 to 40 per cent more power.