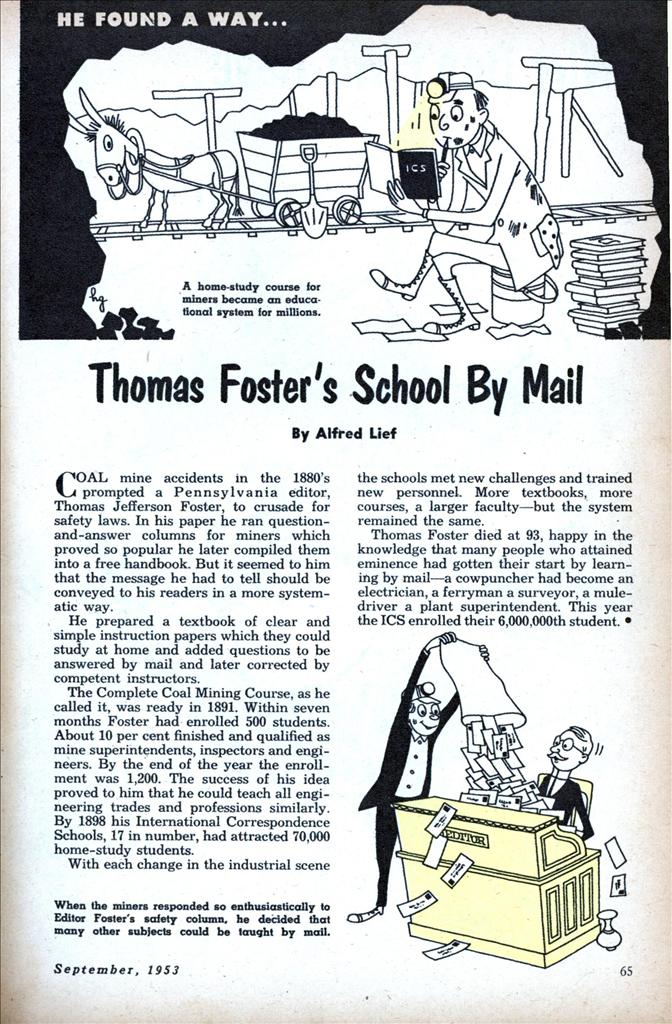 COAL mine accidents in the 1880’s prompted a Pennsylvania editor, Thomas Jefferson Foster, to crusade for safety laws. In his paper he ran question -and-answer columns for miners which proved so popular he later compiled them into a free handbook. But it seemed to him that the message he had to tell should be conveyed to his readers in a more systematic way.

He prepared a textbook of clear and simple instruction papers which they could study at home and added questions to be answered by mail and later corrected by competent instructors.

The Complete Coal Mining Course, as he called it, was ready in 1891. Within seven months Foster had enrolled 500 students. About 10 per cent finished and qualified as mine superintendents, inspectors and engineers. By the end of the year the enrollment was 1,200. The success of his idea proved to him that he could teach all engineering trades and professions similarly. By 1898 his International Correspondence Schools, 17 in number, had attracted 70,000 home-study students.

With each change in the industrial scene the schools met new challenges and trained new personnel. More textbooks, more courses, a larger faculty—but the system remained the same.

Thomas Foster died at 93, happy in the knowledge that many people who attained eminence had gotten their start by learning by mail—a cowpuncher had become an electrician, a ferryman a surveyor, a mule-driver a plant superintendent. This year the ICS enrolled their 6,000,000th student. •