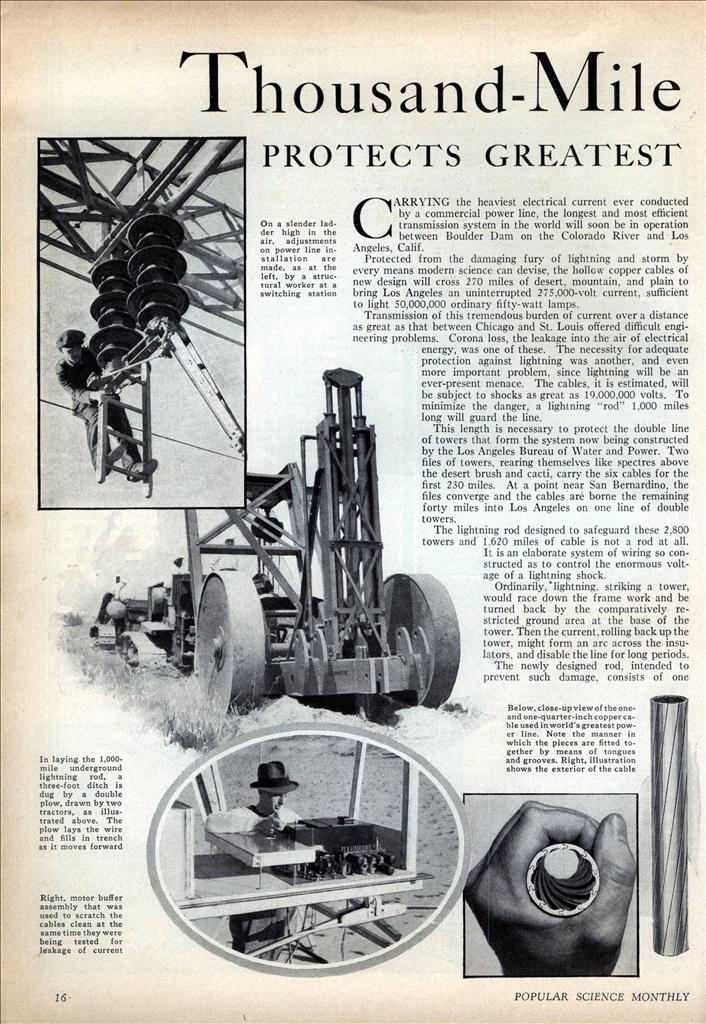 CARRYING the heaviest electrical current ever conducted by a commercial power line, the longest and most efficient transmission system in the world will soon be in operation between Boulder Dam on the Colorado River and Los Angeles, Calif.

Protected from the damaging fury of lightning and storm by every means modern science can devise, the hollow copper cables of new design will cross 270 miles of desert, mountain, and plain to bring Los Angeles an uninterrupted 275,000-volt current, sufficient to light 50,000,000 ordinary fifty-watt lamps.

Transmission of this tremendous burden of current over a distance as great as that between Chicago and St. Louis offered difficult engineering problems. Corona loss, the leakage into the air of electrical energy, was one of these. The necessity for adequate protection against lightning was another, and even more important problem, since lightning will be an ever-present menace. The cables, it is estimated, will be subject to shocks as great as 19.000,000 volts. To minimize the danger, a lightning “rod” 1.000 miles long will guard the line.

This length is necessary to protect the double line of towers that form the system now being constructed by the Los Angeles Bureau of Water and Power. Two files of towers, rearing themselves like spectres above the desert brush and cacti, carry the six cables for the first 230 miles. At a point near San Bernardino, the files converge and the cables are borne the remaining forty miles into Los Angeles on one line of double towers.

The lightning rod designed to safeguard these 2,800 towers and 1.620 miles of cable is not a rod at all.

It is an elaborate system of wiring so constructed as to control the enormous voltage of a lightning shock.

Ordinarily, lightning, striking a tower, would race down the frame work and be turned back by the comparatively restricted ground area at the base of the tower. Then the current, rolling back up the tower, might form an arc across the insulators, and disable the line for long periods.

The newly designed rod, intended to prevent such damage, consists of one galvanized wire stretching along the tops of the towers 150 feet above the ground and a black copper wire buried three feet in the ground in contact with the towers. Where the power line is carried by two lines of towers, the underground wires are connected every 1,000 feet.

Lightning, striking the elevated wire, will be conducted down the tower and by means of the subterranean network, it will be distributed over a wide area of the earth. The system will instantly dissipate 13,000,000 volts of a 16,000,000-volt charge, the maximum voltage to which, with rare exceptions, the line will be subjected. The insulators and conductors are designed to withstand the remaining 3,000,000 volts. If, exceptionally, shocks run as high as 19,000,000 volts, it is expected that small sections of the line will be temporarily disabled but that no serious damage will result.

Next among the problems presented by a transmission line of this length was that of corona, or leakage of energy which is similar to the radiation of heat from a steam-power line. This loss would be sufficient, in a line as long as this, to supply current for a city of 30.000 population.

An obvious remedy was the use of a cable of larger diameter, since corona occurs only when high voltages are forced over a wire of inadequate section. Increasing the cable diameter, however, meant such an increase in weight that stronger and more expensive towers would be required.

problem. The cable adopted is one and four tenths inches in diameter and is built up of ten copper strips, tongued and grooved and joined spirally. The hollow cable, it is contended, has a capacity equal to that of a solid conductor of the same size.

The adoption of a large-diameter cable raised the problem of wind resistance, but extensive wind-tunnel tests at the Harris J. Ryan laboratories at Stanford University showed that the hollow construction of the cable enabled it to withstand heavy wind. More flexible than solid cable, the new conductor is able to damp out vibration to a remarkable degree.

Field studies of the vibration problem were carried out in a highly original manner. Climbing the towers, engineers took motion pictures of the cable as it vibrated under impulses from electric motors. This was accomplished by fixing to the cable a disk containing two pinholes and placing a light behind it. The light, filtering through the pinholes, traced wavy lines on the film. From these photographic studies, new clamps for attaching the cable to the insulators were designed and vibration practically eliminated.

Tests of the towers were unprecedentedly severe. Not satisfied after scale-model investigations that the towers were capable of withstanding stresses caused by possible snapping of cables due to storm, earthquake, or wear, engineers had an actual tower built at Pittsburgh and tested in the largest test frame in the country. Here the tower was twisted and strained and pushed out of shape by punishment far more severe than anything it would encounter in field conditions.