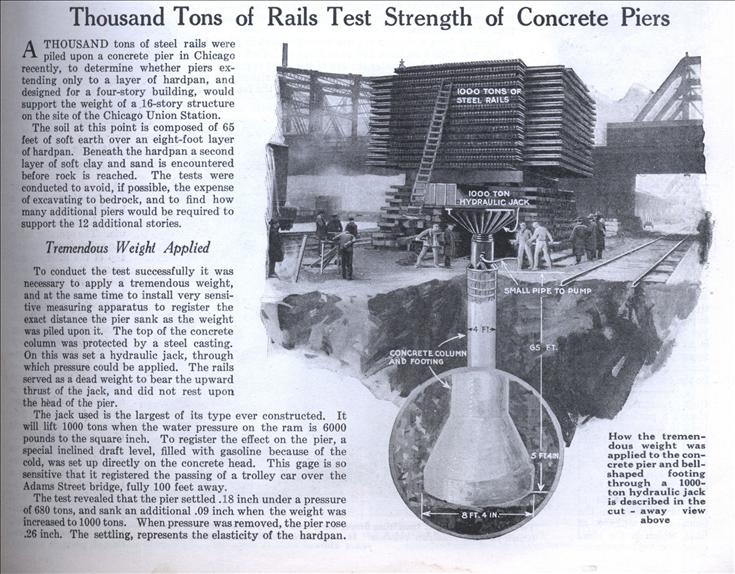 A THOUSAND tons of steel rails were piled upon a concrete pier in Chicago recently, to determine whether piers extending only to a layer of hardpan, and designed for a four-story building, would support the weight of a 16-story structure on the site of the Chicago Union Station.

The soil at this point is composed of 65 feet of soft earth over an eight-foot layer of hardpan. Beneath the hardpan a second layer of soft clay and sand is encountered before rock is reached. The tests were conducted to avoid, if possible, the expense of excavating to bedrock, and to find how many additional piers would be required to support the 12 additional stories.

To conduct the test successfully it was necessary to apply a tremendous weight, and at the same time to install very sensitive measuring apparatus to register the exact distance the pier sank as the weight was piled upon it. The top of the concrete column was protected by a steel casting. On this was set a hydraulic jack, through which pressure could be applied. The rails served as a dead weight to bear the upward thrust of the jack, and did not rest upon the head of the pier.

The jack used is the largest of its type ever constructed. It will lift 1000 tons when the water pressure on the ram is 6000 pounds to the square inch. To register the effect on the pier, a special inclined draft level, filled with gasoline because of the cold, was set up directly on the concrete head. This gage is so sensitive that it registered the passing of a trolley car over the Adams Street bridge, fully 100 feet away.

The test revealed that the pier settled .18 inch under a pressure of 680 tons, and sank an additional .09 inch when the weight was increased to 1000 tons. When pressure was removed, the pier rose .26 inch. The settling, represents the elasticity of the hardpan.