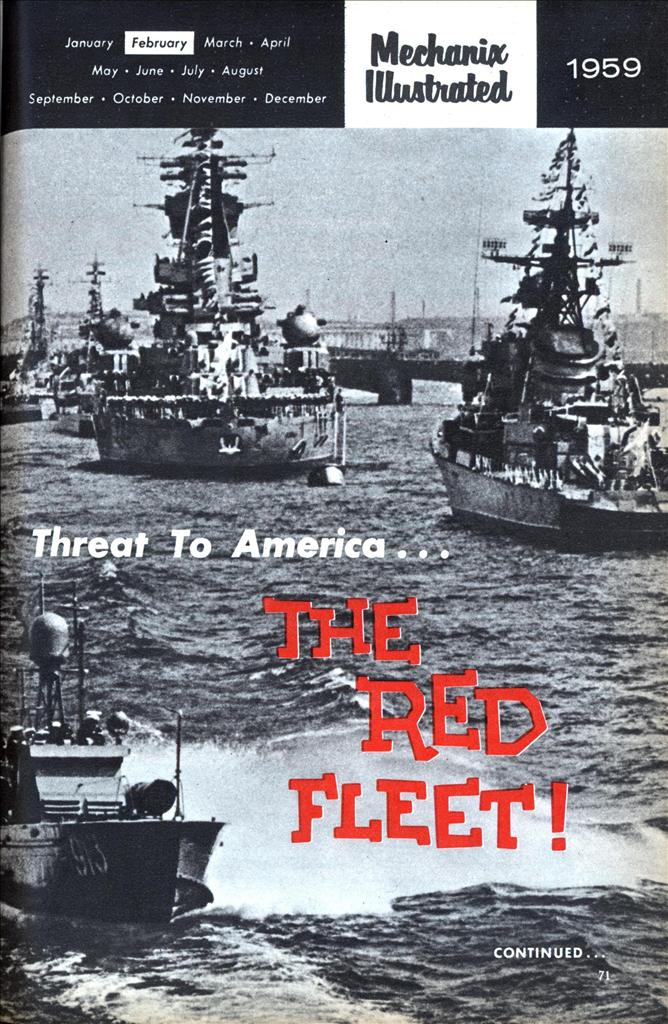 Threat To America… THE RED FLEET!

While we raise massive defenses against the Red air menace, the Russians are building an atomic navy designed and trained for global domination.

This is the new Russian Navy, a fleet that may soon be powerful enough to isolate and destroy this nation in a single sneak attack.

A Pentagon study of this seaborne threat shows that at any moment a handful of sleek Red submarines and missile-launching ships, disguised as merchantmen and spotted strategically off the Atlantic, Pacific and Gulf coasts, could kill an estimated 65 million Americans, destroy our industrial might and cripple our power to retaliate.

Is the Red Navy Russia’s prime secret weapon? That’s what our top defense planners are wondering today. Have the men in the Kremlin, they ask, bluffed us into a massive buildup against possible air attack, while quietly embarking on a gigantic campaign of naval expansion?

With the suddenness of a nightmare Russia’s mysterious naval force has grown in size and striking power. Since World War II the Soviets have quietly built more modern cruisers and destroyers than the rest of the world combined. Her huge sub fleet prowls the globe, her immense atomic icebreaker threatens to blaze new attack routes in the Arctic, her vast array of surface ships stands ready to sever the lifelines binding the free nations together.

It was only a few years ago that the Russian Navy was considered a second-class flotilla among the world’s great sea-going powers. Her leaders were poorly trained, her equipment antiquated, her reputation sullied by disgrace in combat and by Moscow politics.

What happened? What caused the sudden, spectacular growth that now threatens us all?

Someone in the Kremlin, our experts believe, finally took a good hard look at the map. He saw that two-thirds of the Earth is water. He saw the United States pouring millions into air defense while ignoring more ‘than 6,000 miles of vulnerable coastline. He saw the day when long-range missiles launched at sea could bring virtually all of the U.S. into easy range. He gave the orders.

Suddenly, Communist shipyards began to hum. There was no time for research and engineering. Instead, advanced designs from the drawing boards of a vanquished German Navy were speedily adapted to Russian use. Ideas, and even components, from Britain and the United States were pressed into service.

Soon Allied intelligence officers began receiving reports from behind the Iron Curtain that showed Russia was out- building the U.S in submarines by six to one, in destroyers by nine to one, in cruisers by 14 to one.

This has been warning enough that an important revolution in strategy may be in the making. But it hasn’t helped our own Navy speed its modernizing plans.

Witness this grim estimate by Vice Adm. T. S. Combs, Deputy Chief of Staff: “Our ships are aging faster than they are being replaced. We are now at the point where large numbers of our ships are close to their 20th birthday— and unless we intensify our efforts now, by the middle 1960s our forces will be grossly inadequate to meet the challenge of a fully modern Russian Navy on the high seas.”

Each day that margin of safety looks less assuring. Right now the Kremlin controls the largest submarine force in naval history, much of it capable of operating within sight of our coastlines. More than 450 underwater behemoths sport the Red Star, a fleet eight or nine times the size of the Nazi submarine armada at the outbreak of World War II.

Meanwhile, Russian shipyards are known to be capable of turning out as many as 100 new long-range subs each year. Our entire active submarine force is just a bit above that figure.

The spurt in surface fighting ships is also causing deep concern in Allied naval circles. Russia has been launching record numbers of sturdily armed and fast destroyers and cruisers as well as mine-laying craft and “fishing” trawlers which keep close tabs on our naval maneuvers and our shorelines—just as the Japanese Navy did in the years preceding World War II.

But there was something puzzling in all this.

Why, our intelligence officers asked, were the Reds pouring huge amounts of critically short steel, electronics and skilled manpower into a fleet that was essentially of World War II design? Why weren’t they switching their attention to the nuclear-powered, missile-launching navies of the future?

Why? By now bits and pieces of information have lead to this informed analysis: The Russians are turning their attention to radically new types of craft—posing an even greater challenge to our defense forces.

It’s more than a guess that the Communists will soon announce construction of mammoth “underwater sputniks”— nuclear-powered submarines which can travel for months without refueling— carrying 1,500-mile missiles with an H-bomb punch.

Meanwhile, they’ve been perfecting a German plan to permit any of their fleet of existing submarines to fire long-range ballistic missiles—something this nation hopes to be able to accomplish with its complex Polaris system within the next few years.

The Nazi-Russian system is an ingenious short-cut. Missiles and a special launching canister are towed behind submarines in water-tight containers. When the subs are within range of their targets the rocket to be fired is placed, by remote control, in the launching device. A predetermined amount of water fills the canister, which then turns up into firing position. At a signal from the submarine the rocket is thrown clear with a blast of compressed air, its own engine and instruments carrying it to the target.

The Reds are also believed to be converting their newest surface ships to mobile missile launching platforms. And here, too, they may be ahead of the game.

Our experts say there is real reason to fear that the Russians have been able to develop a simple, powerful fleet missile. While no details are available, it is believed that the weapon could be used for long-range attacks against ships or cities, for destroying enemy submarines or for defense against air attack. Our researchers— hoping eventually to replace our complex family of single purpose rockets—haven’t yet been able to match this.

With such a seaborne arsenal, the Reds could wreck unimaginable destruction in a surprise attack. Even if Soviet ship or sub-launched missiles were only capable of a 550-mile range, their first nuclear blow might well destroy 43 of our nation’s 50 largest cities, 85 per cent of American industry. At the same time, other Red Navy missile units could go after the retaliatory power of the Strategic Air Command, striking many of its bases from predetermined offshore hiding places.

Meanwhile, the global Soviet fleet could well have the size and power to defend the Russian coastline against attack and to sever Allied sea lanes—thereby isolating U.S. and Allied forces in Europe and Asia, where they would be clay pigeons for the Red Army and Air Force.

Each day now, Russian Navy leaders grow more bold in their thinking. They warn of “quite different, more modern weapons.” They boast of Soviet Warships having “the greatest firing power in the world.” They hint at, but keep secret, Red Navy progress in atomic power, long-range rockets, nuclear weapons.

Their 800,000 men and nearly 3,000 ships, their sudden rise as a naval power are already causing restless nights in the capitals of the free world. What will happen tomorrow when our own aging fleet is surpassed by modern Soviet naval might?

Our own navy has the will and the skill to make sure that that day never comes. But the premiums on that kind of insurance come high. It means more men, more money, more missiles, more ships, more planes. Will the price be paid in dollars today—or in lives tomorrow?