Why use those annoying glasses when you could stare through slits cut in a pipe? 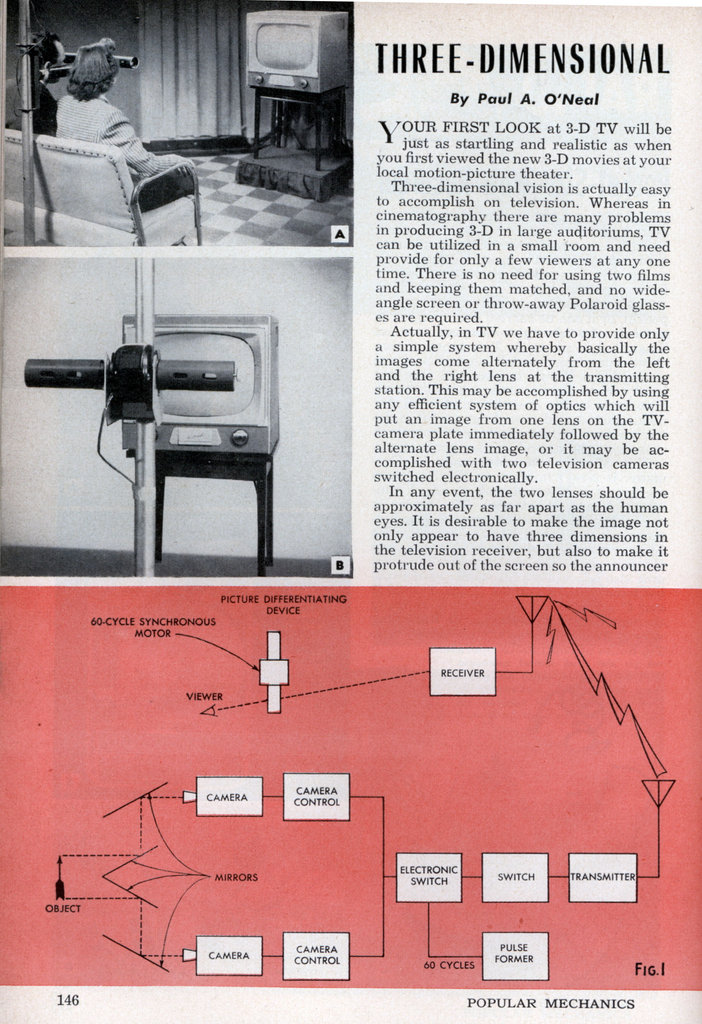 By Paul A. O’Neal

YOUR FIRST LOOK at 3-D TV will be just as startling and realistic as when you first viewed the new 3-D movies at your local motion-picture theater.

Three-dimensional vision is actually easy to accomplish on television. Whereas in cinematography there are many problems in producing 3-D in large auditoriums, TV can be utilized in a small room and need provide for only a few viewers at any one time. There is no need for using two films and keeping them matched, and no wide-angle screen or throw-away Polaroid glasses are required.

Actually, in TV we have to provide only a simple system whereby basically the images come alternately from the left and the right lens at the transmitting station. This may be accomplished by using any efficient system of optics which will put an image from one lens on the TV-camera plate immediately followed by the alternate lens image, or it may be accomplished with two television cameras switched electronically.

In any event, the two lenses should be approximately as far apart as the human eyes. It is desirable to make the image not only appear to have three dimensions in the television receiver, but also to make it protrude out of the screen so the announcer seems to hold his hand out into the room. This startling illusion is illustrated in Fig. 3. You have the desire to shake hands with him, or to reach out and grasp a box of candy that he may offer. This illusion may be exaggerated by having the pickup lenses farther apart than the eyes of the viewer. In the days to come, the expert stereo-TV cameraman will have to know his angles and protrusions.

The principles recently demonstrated by U. A. Sanabria at American Television Inc., involve the basic system illustrated in the block diagram, Fig. 1. A square-wave generator alternately cuts off electronically first one camera, then the other, producing 15 images from each camera. Then these are transmitted in the usual fashion using the same impulses, and nothing need be done to upset the transmitting standards. This studio arrangement with the TV-picture cameras and the 3-D periscope is being inspected and checked by Mr. Sanabria in photos C and D.

At the receiving end, photos A and B, the television receiver does not have to be touched. The picture-viewing device is tubular in form, and the experimental model employs an ordinary magnetic synchronous motor which is used to twirl a little piece of metal called a butterfly. When this flat piece of metal, with a cutout in each alternate corner flops over, it opens the right eye first, then the left one in step with the electric switch at the camera end. Since all TV stations are local, the ordinary 60-cycle power system will be adequate for general use.

Mr. Sanabria states that it is possible to utilize many tricks to eliminate the mechanical “lorgnette,” and suggests a checkerboard system of Polaroid, Fig. 2, having a right and left alternate series of checkers, and then using interdots at the transmitter to correspond with every other image. Then, with ordinary Polaroid spectacles, no moving parts have to be used. * * *