Popular Science
Issue: Apr, 1933
Posted in: Origins
No Comments on THREE FACES ON ONE PORTRAIT (Apr, 1933) 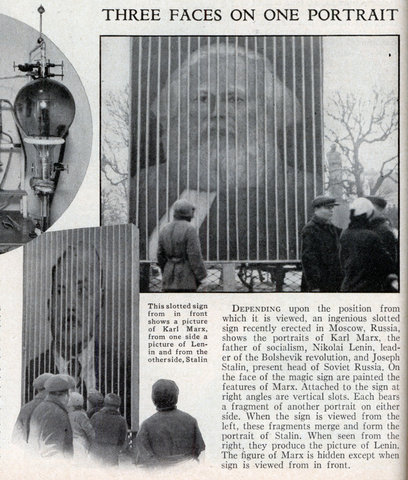 THREE FACES ON ONE PORTRAIT

Depending upon the position from which it is viewed, an ingenious slotted sign recently erected in Moscow, Russia, shows the portraits of Karl Marx, the father of socialism, Nikolai Lenin, leader of the Bolshevik revolution, and Joseph Stalin, present head of Soviet Russia. On the face of the magic sign are painted the features of Marx. Attached to the sign at right angles are vertical slots. Each bears a fragment of another portrait on either side. When the sign is viewed from the left, these fragments merge and form the portrait of Stalin. When seen from the right, they produce the picture of Lenin. The figure of Marx is hidden except when sign is viewed from in front.