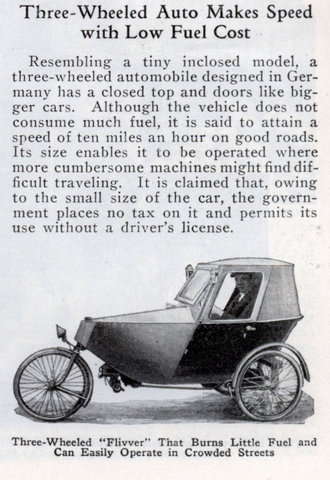 Three-Wheeled Auto Makes Speed with Low Fuel Cost
Resembling a tiny inclosed model, a three-wheeled automobile designed in Germany has a closed top and doors like bigger cars. Although the vehicle does not consume much fuel, it is said to attain a speed of ten miles an hour on good roads. Its size enables it to be operated where more cumbersome machines might find difficult traveling. It is claimed that, owing to the small size of the car, the government places no tax on it and permits its use without a driver’s license.