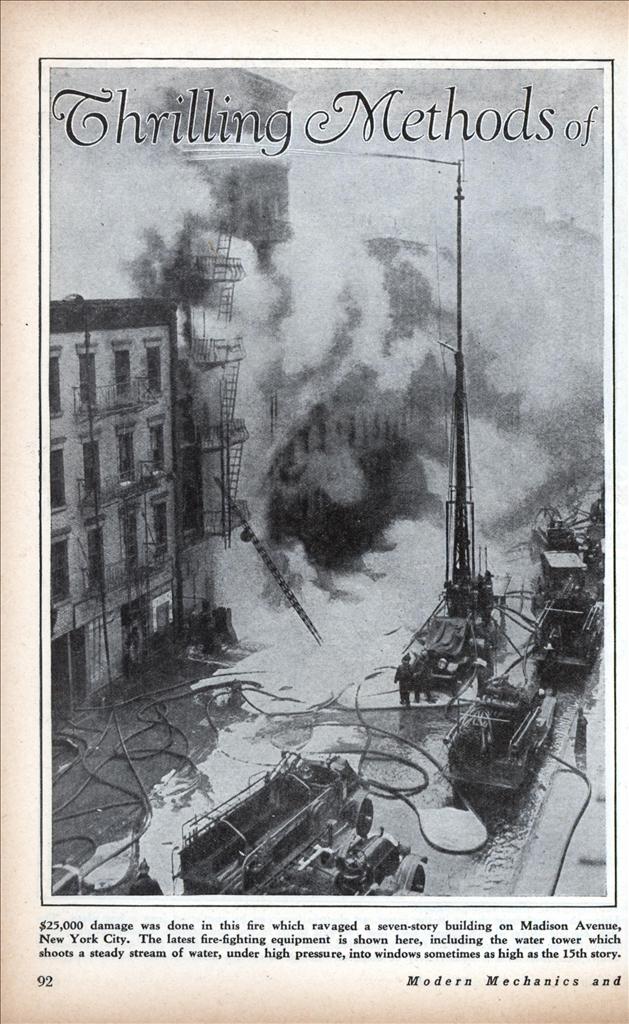 To many people, the fireman is a fellow who sits around the engine house playing checkers until the gong calls him to a thrilling dash through the streets. But in reality, the modern fireman must be a skilled technician in various trades.

IN THE big cities the chief of a fire department has to be a navigator, an inventor, an electrical and mechanical engineer, and a practical marine constructor, ever prepared to risk his own life and safeguard the lives of his men.

Try to reproduce in your mind’s fancy a spectacular fire which broke out recently in New York City. Picture a fire-swept Hudson River pier, the heat so intense that the fronts of structures almost 200 feet distant are scorching, shriveling and bursting into flame.

A fourth alarm brings another platoon of engines to the scene. They are reinforcements to fight the fire on land. A fireboat is in the slip beside the burning pier.

The fire is at its greatest height at the point where the pier and bulkhead meet, and here a loaded barge is moored. Flames have begun to creep over the barge. A cloud of smoke over the land-end of the slip shrouds the pier, bulkhead, barge and water. It is like a smoke-screen rushing over No-man’s land and just as deadly.

A south wind fans the flames to greater fury. Other fire-boats come to the rescue. For a moment it looks like all of downtown Manhattan, where the richest markets in the world are located, is going to be swept from the face of the earth. Scores of streams from land and sea engines pour thousands of gal- Ions of water onto the fire every minute.

As broadside after broadside of water is heaped upon the angry flames, Fire Chief John Kenlon, at one time referred to as the admiral of New York City’s big fleet of fire-fighting boats, arrives on the scene to assume personal direction, like a generalissimo.

Soon one of his lieutenants hails him.

“There is somebody in there calling for help,” exclaimed the lieutenant, pointing to the barge moored at the fire-ridden pier. The barge is nothing more than a black pall, its outline is barely visible.

“No one can possibly be alive on that pier,” said Chief Kenlon. “It must be some one in the water.”

Chief Kenlon ordered the biggest of the fire-boats to swing over toward the barge. Then he mounted the fire-fighting craft himself, and his lieutenant followed him.

“You’re sure you heard a human voice?” demanded Chief Kenlon.

“I’m certain,” declared his assistant, choking with emotion and the sting of smoke.

“There it is again,” repeated his aid.

Without a second’s hesitation, Chief Kenlon gave the boat’s pilot the go ahead signal, simultaneously ordering the men at the standpipe’s aft to form a water-curtain over the bow of the fire-boat, and the boat ad- vanced into the blanket of smoke, between raging flames.

Chief Kenlon and his right-hand man and three other firemen crowded into the bow of the boat, peering into the blazing gulf ahead of them. A water-sheet played over them, preventing their clothes from catching fire.

The boat had scarcely moved fifty feet forward when the heroes in her bow discovered two men clinging desperately to a burning spar. Their shouts had ceased. They suffered their agony silently. They were barely alive. Another minute and they would have collapsed and died.

It was as weird a scene as Chief Kenlon had ever witnessed in nearly a half century of fighting fires. Both men kept their bodies under water, their heads bobbed up and down as they struggled to breathe the stifling and suffocating air. Their hands desperately sought portions of the spar which was not in flames.

Chief Kenlon sternly looked his fellow firemen in the eye.

“I want volunteers!” he said, since he himself could not leave the post of command at a fire where a general’s hand was indispensable.

No sooner uttered than two of his men, with ropes attached to their bodies, plunged into the steaming water, and each of them seized one of the helpless men. Standpipes from the boat played over them as they bravely bore their courageous charges to safety.

The rescued men were both unconscious from their ordeal. Chief Kenlon ordered the fire-boat to make a quick retreat, as already her woodwork was afire in many parts from going too far into the danger zone. The two men had been trapped on the barge, it was later learned, and had been unable to make their escape.

The fire itself did a damage estimated at $500,000. It might have been more disastrous if it had not been for the advanced methods in fighting spectacular blazes, no matter where they break out in a city as big as New York.

All the horses have disappeared from the New York Fire Department. So have the coal-fired steam pumping engines which used to shriek at intervals for more fuel and whose pumping pressure varied according to the heat in the firebox. All the engines are motor-driven today. These present day engines can deliver 1,000 gallons of water per minute at a pressure of over 500 pounds to the square inch.

The great problem arising in the metropo- lis today involves the fighting of fires from 500 to 1,000 feet high. The Empire State Building of former Gov. Alfred E. Smith is 85 stories high, and the day is near for the 100-story structure. It is needless to say that the inventor of adequate apparatus for such a fire will get his just reward.

“The architects have been working fast,” says Chief Kenlon. “But so far, and I say this without vainglory, we have been able to keep a jump ahead of them. It is time to give thought as to what we will do when buildings rise beyond 100 stories.

“For a 100-story building we must have a standpipe eight inches in diameter, which will stand pressure of 1,000 pounds a square inch. This is a terrific pressure but we already have pipe and valve and outlet fixtures which will meet that strain.

“In the modern building of the latest design, one which is 35 stories or over, there are booster pumps in the engine rooms, to help the fire engines get the necessary pressure. However, with every added pound per inch increase of pressure the strength of the stand-pipe must be greater proportionately.

“I expect to see the day when fires in lofty skyscraper quarters will be fought with special types of airplanes. They will operate on the system of the helicopter so that they can remain stationary in a desired and advantageous spot. Special chemicals would be used by firemen in their airplanes for putting out the blaze. We have seen the police departments take up aviation. I believe the firefighters will go a long way in that direction.”

The close of this year will see one of the smallest totals of damage to property by fire in ten years, possibly the smallest despite the fact that skyscrapers have shot up into the sky with steady speed.

Last fall the city fathers informed Chief Kenlon and his assistant chief, the famous Smoky Joe Martin, that they would have to retire, that the city, ever proud of their illustrious achievements in the cause of preservation of property against the ravages of the fire demon, was ready to allow them a comfortable pension. Despite the fact that both fire-fighters protested, avowing that their combined careers of nearly 100 years in a fireman’s harness could come to a fitting end only at the scene of a fire, they were told that an unsympathetic law forbade them to continue in active service.

Chief Kenlon and Smoky Joe Martin, two of the most colorful and ingenious men the history of fire-fighting has ever known, are greatly responsible for the progress made in combatting various types of fires today.

The highest fire which ever broke out in New York City, or anywhere else for that matter, occurred in the Woolworth Building in January, 1929. Fire broke out in a room on the fifty-seventh floor.

When firemen arrived on the scene, they realized the futility of trying to reach the. blaze with water-towers or hook and ladders. Speed was of the essence here, as they soon learned that a number of persons had been trapped on the 58th floor. The fire raged 765 feet above the street level.

Firemen mounted to the 47th floor with * their hose, then they attached it to a stand-pipe and advanced toward the floor on which the fire was. In this manner the blaze was put out in short order, with little damage resulting.

The standpipe system is installed in all high buildings and no matter how high, a fire can be extinguished in the same manner anywhere in New York.

However, during the course of the construction of the Hotel Sherry-Netherlands two years ago a fire broke out in the scaffolding about 400 feet up from the street. The blaze was in the tower at about the 45th floor.

Since the building was not finished, this quarter was inaccessible by stairs or any other approach. No standpipes had been installed yet. The firemen resolved to let the fire spend itself- in the tower region while from surrounding roofs they played streams of water on lower floors to prevent the spread of the flames.

The fact that the hotel was constructed in up-to-date fireproof manner together with the strategic methods of the fire-fighters confined the fire to that particular area. One of Chief Kenlon’s proudest assertions is that no fire ever crossed the street or leaped over an alley during his fire-fighting regime. Fires were always kept in their places. In other words, it wouldn’t have meant much in Kenlon’s days if a cow kicked over a lantern in a barn.

But no story concerning the fighting of fires and the thrills and the science which go with it could be complete without a generous portion from the diary of Smoky Joe Martin, death-defying dare-devil who never commanded one to enter where he himself did , not lead.

He* was christened with his famous nickname over forty years ago. It was while he was at a downtown fire that poisonous waves of smoke rolled out of an old brick house. Prostrated firemen lined the sidewalk for a block. The then fire chief, Edward Croker, was dashing back and forth along the hose-strewn street, ordering his men to retreat from the death-trap where a rising tide of flame dropped the crumbling walls in avalanches.

Finally Chief Croker traced a lone fireman to a cellar where he was clutching at the nozzle of a hose, firing away at the onrushing flames. Chief Croker didn’t dare go any nearer. Later when the lone one came up for air, the chief looked at him spellbound.

“Gentlemen,” he announced, “this is Smoky Joe Martin.” And the name stuck ever afterward.