Thrills in Laying Deep-Sea Cable Across the Atlantic (Jan, 1924)

wrote a huge travelogue for Wired in 1995 where he followed the progress of a new world girding fiber optic network being constructed. Along the way explores every aspect of the process and history behind laying communications cables underwater. It is a wonderfully interesting read and I highly recommend it. 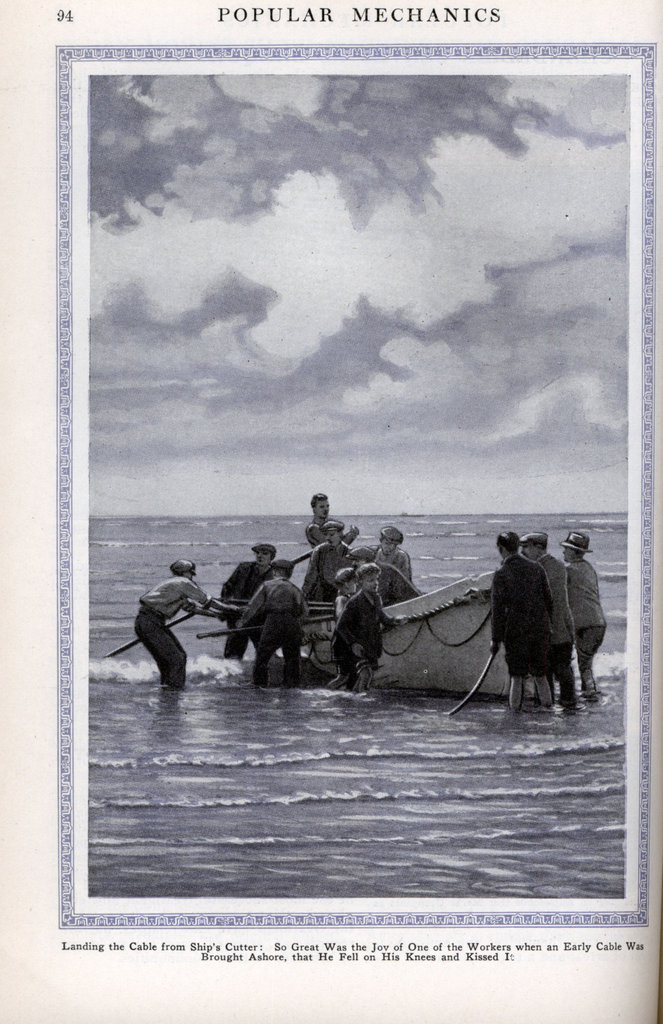 Thrills in Laying Deep-Sea Cable Across the Atlantic

WHILE, 57 years ago the world noted the fact that the steamship “Great Eastern” had completed its memorable work of connecting America with Europe by the first successful Atlantic telegraphic cable, the recent landing on the south shore of Long Island of a new line of communication attracted little attention.

Nevertheless, this latest undertaking marked the closer binding together of the New World and the Old, for, despite the advent of the wireless and the establish-ment of powerful radio stations, which are capable of spanning vast terrestrial distances, the fact remains that this newer method of electrical intercourse has not scrapped the older order of long-range telegraphy.

Traffic over the submarine cables linking North America with Europe has increased fourfold in the last decade, and yet, until recently, nothing has been done within that period to add to these undersea nerves of communication. The cost of the new cable, representing the present height of scientific knowledge concerning such things, has been put at $15,000,000; and to get it properly in place on the sea bed has required the service of specially constructed craft manned largely by a crew trained for that hazardous and extremely exacting work.

Few persons realize what painstaking skill is required in building a submarine cable properly insulated and duly armored with a wrapping of steel wires, strong enough to withstand the rub of a rocky bottom and the continual sweep of tidal currents. Not only that, but this conduit, by which the feeble electrical impulses carry the daily heartbeats of national life from shore to shore,must be proof against the penetrating persistence of deep-sea worms, and sufficiently sturdy to hold its own against attack of swordfish and other large denizens of the ocean. Should it break or be severed, when once in place, the task of picking up the parted sections, or of raising the defective cable at the right point, may require grappling for it miles below the surface and sweepingwide areas of the sea. In short, the story of cable-laying is an epic well calculated to hold one spellbound.

Life aboard a cable-laying vessel is filled with excitement. Off the coast of Spain, recently, two tons of oysters were hauled on board an Eastern Telegraph Company boat, when a cable was pulled up for mending and had to be hacked off before the repair could be effected. Again, in the Gulf of Suez, a cable was brought up coiled around the body of a small whale. Sponges, coral, old fishing nets, and all sorts of shells are brought to the surface, and the refuse of civilization, washed down the rivers into the sea, has been picked up as far as SCO miles from land.

Between about 1845 (when gutta-percha made submarine telegraphy a practical possibility) and the middle 70’s (when cables became part of the ordinary routine of civilization), tremendous excitement was aroused by every new attempt to establish such communications across the ocean. The first cable between Dover and Cape Grisnez amused the mid-Victorian loafers on the beach, for they thought the thing was to be worked like a bell pull and tugged from either coast of the English Channel. That was in 1850.

People soon grew better informed and wildly enthusiastic. Even the cable laid during the Crimean war between Varna and Balaklavaâ€”an unheard-of distance, 356 milesâ€”although it failed to work, was hailed as a signpost of progress. The 1856 Atlantic cable began from western Ireland, under the eyes of the Lord Lieutenant, while prayers were offered from the beach for its success. The current, nevertheless, stopped mysteriously at intervals, and finally halted altogether. In the next year communication with America was kept up for only a month. Soon after this there was a pause, while a commission sat to examine the whole question. Over this early adventure three to four millions had been lost.

The commission reported that, despite its discouraging and expensive past, submarine telegraphy had an infinite future. Encouraged by this, the believers in progress watched the “Great Eastern” with confidence. The ship lost the 1865 cable while paying it out. But in 1866 it triumphed. After this the cables were woven very swiftly into a network that covered all the seas of the world. So great was the excitement, that during the landing of an early Atlantic cable at Heart’s Content, Newfoundland, one of the workers fell on his knees and kissed it.

The men primarily responsible for linking the Old World with the New were Cyrus W. Field and Samuel Morse. When the latter announced in 1857 that messages could be sent from America to Europe through means of thin strands of wire stretched along the ocean’s bed, the people of the day hooted. Morse had shown the world the wonders of telegraphy a short time before and had flashed to Alfred Vail, his co-worker, that epoch-making message, “What hath God wrought!” That happened May 24, 1844; and came after he had faced discouragement and rebuffs that would have driven an ordinary man mad.

Came 1857, and Field, a New York merchant, Morse, and a group of associates, decided that a transatlantic cable would not be an impossibility. Interest in the venture became intense and on Aug. 7, 1857, the ship “Niagara” left Valentia Bay, Ireland, with its rolls of cable. Four days later the brakes on the cable-laying apparatus we’re put on, while the stern of the boat was down in a swell. The cable parted, thus ending the venture for that year.

“We knew it!” croaked the scoffers on each side of the water. “The whole thing is a humbug. Did those men think we would swallow everything they said?”

Another attempt in 1858, which also failed, brought a wave of comment from all over the United States and Europe. Newspapers were unanimous in pointing out a hundred reasons why a cable never could be laid, and in sympathizing with those who had sunk their money in it. Three other unsuccessful attempts followed, victory not greeting the efforts until 1866.