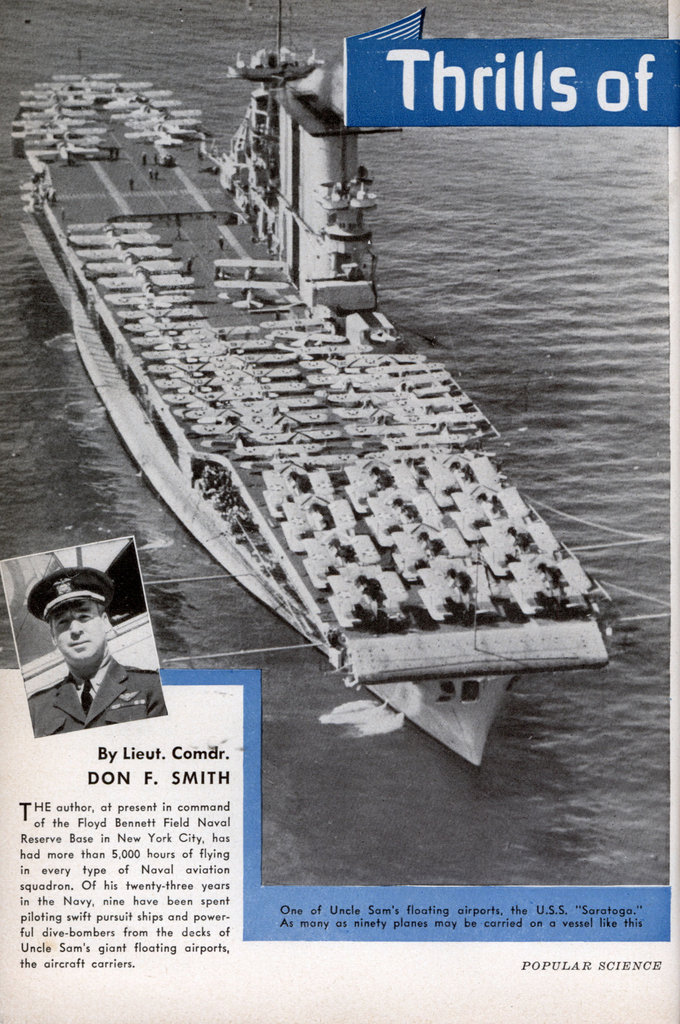 THE reddish-brown deck streaks to the rear. Open water flashes under your wings. You are climbing. That, for a pilot aboard one of those hornets’ nests of the sea, the aircraft carriers, is the beginning of adventure.

One thrill which occurred off Panama, stands out in my memory. I had lifted a T4M torpedo plane from the million-dollar teakwood deck of the Saratoga. My mission was simple. I was to fly to another vessel, blank it off with a smoke screen, and return to my floating airport. Just as I slanted down above my objective, thirty minutes later, a connection at the smoke tank snapped. Choking, blinding billows of chemical vapor swirled around the plane.

Coughing and gasping, I kicked over the rudder. The ship skidded to the right; the trail of vapor veered to the left. I gulped in fresh air and straightened out. In an instant, the white clouds of chemical fog closed in again. For more than four minutes, I kept skidding violently first to one side and then to the other; bursting momentarily out into fresh air and then disappearing again in the billows of white vapor. Behind me, stretching for more than a mile and a half, the trail of fog zigzagged like a writhing snake. Observers thought I had gone crazy. But those momentary emergences into open air kept me alive until the tank was empty.

That wouldn’t happen again once in a million times. Every safety aid is given the carrier pilot. Equipment on such vessels is the best in the world. And, when an emergency such as I have described does occur aloft, a board of experts, later on, goes over every detail of the experience to plan additional safeguards for the future.

During twenty-three years in the Navy, including experience on many types of combatant ships and Yangtze River gunboats, I have had about all the fun and adventure the service has to offer. But the biggest kick of all has been flying with the “carriers”— three of the largest in the world, the pioneer Langley, the Saratoga, and the Lexington.

Even when the unexpected doesn’t add to the excitement, a flight from one of these sea airports is thrilling enough in itself.

With brakes on and motor roaring, your ship stands poised between twin yellow lines running the length of the deck. You get the signal, release your brakes, race down the 800 feet of teakwood that forms the runway, and lift into the air. A moment later, another plane follows you. Thus, in rapid suc- cession, the sea hawks take wing. Between seventy and ninety planes ride on one of Uncle Sam’s large carriers. The smallest are single-seat, high-speed scouting planes; the largest, Douglas bombers.

Every flight from an aircraft carrier is made for some specific purpose. Like signal practice in football, life aboard such a ship is a succession of drills, a perpetual effort to increase efficiency. Four times a year, sham battles, or Navy games, are carried out at sea with carrier pilots discovering and attacking the “enemy.” The weeks between are spent in radio drills, navigation study, dive bombing, gunnery practice, homing drills, and group exercises. Over and over again, operations are repeated until they fit like cogs into a smooth-working machine for offense and defense.

For dive-bombing, practice, paper bags of aluminum powder, tossed into the ocean, spread glittering, fifteen-foot disks on the water. These shining targets are visible at 18,000 feet, an altitude from which the ample deck of the aircraft carrier appears no larger than a tiny piece of brown ribbon. As many as eight times in a single day, pilots will make screeching, three-mile plunges from the sky. The pull-out begins at about 2,500 feet, just after the dummy bombs have left the ship, and the plane levels out only 1,000 feet or so above the water.

The landings provide most of the fireworks on a floating airport. When planes are coming in, a special Diesel-powered whaleboat, holding emergency crews and a flight surgeon, is slung over the side ready to go into action if a flyer is forced down in the water. Two destroyers always follow 1,000 yards apart in the wake of the carrier, also ready for rescue work. And, on board, a special movie cameraman stands by, ready to film every landing that may end in a crack-up. Even the most trivial accident is recorded for study. Pilots, at regular intervals, see “crash shows.” These reels, showing accidents on board the various carriers, help them avoid making mistakes that have brought others to grief.

Sometimes as many as seventy-four highspeed ships will be wheeling about an aircraft carrier, getting into the “landing groove,” ready for coming aboard in quick succession. When they do come in, they land only a few seconds apart. This exhibition of precision flying is a stirring spectacle. For the pilot, it provides a thrill that never grows stale.

I have been through it more than 300 times. Once, off Hawaii, ground swells were lifting and dropping the bow of the Lexington through a fifty-foot arc when I swooped down for a sixty-seven-mile-an-hour landing. Another time, the Saratoga was turning as well as steaming full speed ahead when the engine of my torpedo plane sputtered and I had to sit down on the deck as best I could. In normal landings, as well as in take-offs, the aircraft carrier is running at peak speed into the wind.

Just as the quarterback directs a football team, so the signalman on the bridge of an aircraft carrier directs the pilots in landing. He is always a veteran flyer himself and he studies the peculiarities of each of the pilots on the carrier until he knows what he will do in any kind of an emergency. With a yellow flag in either hand, he “lands” the ships in quick succession. From 300 yards out, you watch the signalman, not the deck, when you sit down on a carrier. If you are coming in too fast or are likely to overshoot, he gives you the “wave-off,” chopping the two flags across each other in front of him. If you are all right, he swiftly draws one flag across his throat, the signal to cut the engine. The signalman is the key to successful operations on a carrier; it is he who must make split-second decisions that enable scores of planes to land with clockwork regularity.

Hardly has your plane stopped rolling down the deck, when you land, before experts are swarming over it for inspection. Riggers go over the wiring, mechanics examine the engine, gasoline crews fill the tanks. Every plane on an aircraft carrier is filled with fuel, ready to go, at all times. As soon as all the planes have landed, they are rolled back to the stern, each to its “stall,” or spot where it is secured by ropes attached to eyelets in the deck. Rain or shine, almost all of the aircraft are left in the open. During high winds, the mechanics place special boards called “spoilers” along the leading edges of the wings to break up the air currents and reduce the strain.

It is during the quarterly Navy games that activity aboard an aircraft carrier reaches its peak. Scouts, patrol planes, attack squadrons are taking off and landing at frequent intervals. Sometimes, for seven or even ten days at a stretch, the pilots will follow a grueling schedule that starts with reveille at 3:30 in the morning and ends with taps at 9:30 in the evening. The work is strenuous but it has the attraction of a thrilling, exciting game. Of the 1,400-odd men who live aboard one of these floating airports, only about 100 are carrier pilots. Highly trained specialists, they fill a job that is tops when it comes to variety, speed, and thrills.