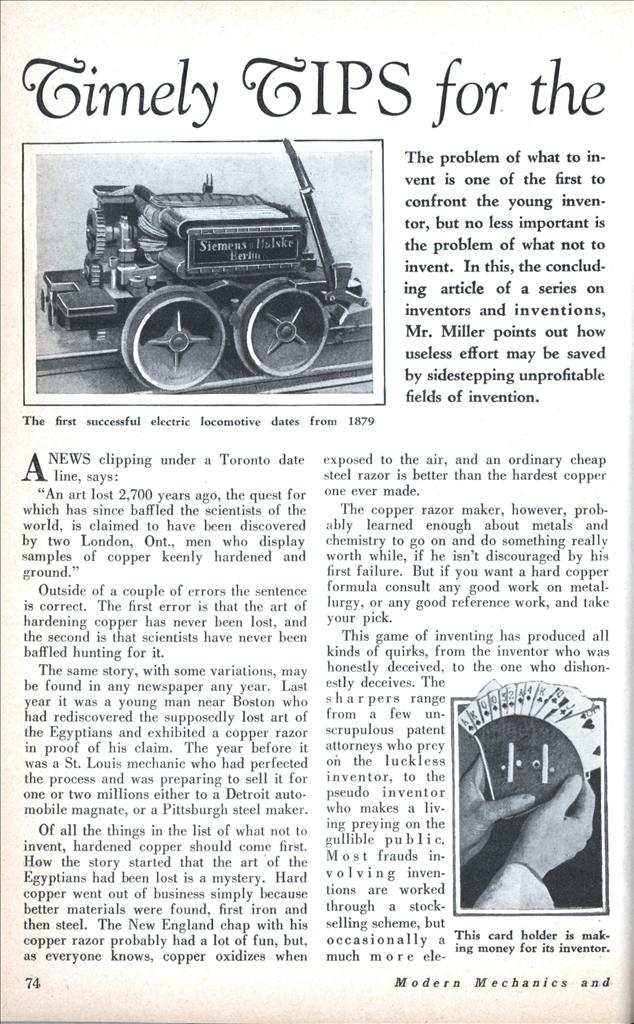 Timely Tips for the Inventor

Concluding a Series of Articles by JAY EARLE MILLER

The problem of what to invent is one of the first to confront the young inventor, but no less important is the problem of what not to invent. In this, the concluding article of a series on inventors and inventions, Mr, Miller points out how useless effort may be saved by sidestepping unprofitable fields of invention.

A NEWS clipping under a Toronto date line, says: “An art lost 2,700 years ago, the quest for which has since baffled the scientists of the world, is claimed to have been discovered by two London, Ont., men who display samples of copper keenly hardened and ground.”

Outside of a couple of errors the sentence is correct. The first error is that the art of hardening copper has never been lost, and the second is that scientists have never been baffled hunting for it.

The same story, with some variations, may be found in any newspaper any year. Last year it was a young man near Boston who had rediscovered the supposedly lost art of the Egyptians and exhibited a copper razor in proof of his claim. The year before it was a St. Louis mechanic who had perfected the process and was preparing to sell it for one or two millions either to a Detroit automobile magnate, or a Pittsburgh steel maker.

Of all the things in the list of what not to invent, hardened copper should come first. How the story started that the art of the Egyptians had been lost is a mystery. Hard copper went out of business simply because better materials were found, first iron and then steel. The New England chap with his copper razor probably had a lot of fun, but, as everyone knows, copper oxidizes when exposed to the air, and an ordinary cheap steel razor is better than the hardest copper one ever made.

The copper razor maker, however, probably learned enough about metals and chemistry to go on and do something really worth while, if he isn’t discouraged by his first failure. But if you want a hard copper formula consult any good work on metallurgy, or any good reference work, and take your pick.

This game of inventing has produced all kinds of quirks, from the inventor who was honestly deceived, to the one who dishonestly deceives. The sharpers range from a few unscrupulous patent attorneys who prey oh the luckless inventor, to the pseudo inventor who makes a living preying on the gullible public. Most frauds involving inventions are worked through a stock-selling scheme, but occasionally a much more ele- mentary swindle is perpetrated even before the patenting stage is reached One of the simplest was invented by a westerner who followed the patent office gazette religiously, and, when he saw a likely looking device, prepared drawings for a somewhat similar invention, changing the original just enough so that the sketches could not be recognized as a bare-faced steal. Then he would call on likely backers and sell-them-fractional interests for a few dollars “to raise money to get the idea patented and ready to be sold to a manufacturer.”

In that way he might raise several hundred dollars in lots ranging from $25 to $100 from each buyer. Out of the proceeds $10 would be sent to Washington with instructions to search the records and see whether the inventor’s “idea” conflicted with any previous patents. Back would come word that another inventor had anticipated the idea by a few weeks or months, and the sharper would “regretfully” pass the information along to the investors, and pocket the rest of the money.

Another pair, also on the Pacific coast, worked a much more elaborate scheme. One would pose as a wealthy and retired business man, meet the moneyed men of a town, be a good spender and a good talker, and then casually work a conversation around to the subject of invention, giving him an opportunity to remark that there was a good field for such and such a thing and he wouldn’t be surprised to see some clever fellow perfect it some day and make a vast fortune.

After that the ground was allowed to rest for several weeks, then the other half of the pair would appear and seek to enlist the aid of the same men in financing his invention. The chosen victims would recall the remark of the supposedly wealthy and retired business man that such a device would earn a fortune, and jump at the chance to invest. Needless to say, the invention either would not work, or had been anticipated by some one else.

If anyone tries to sell you an unpatented invention or an interest in one you can quickly determine whether the idea is new and novel by spending $10 on a search of the patent records.

Of all the things not to invent, probably more people spend more time on perpetual motion, than on any one subject. Despite the fact that science knows perpetual motion to be an impossible dream, and the U. S. patent office no longer will issue patents on such devices—through invoking the rule requiring a working model to be submitted in cases of doubt—yet hundreds, and perhaps thousands of people are constantly trying to accomplish the impossible.

All perpetual motion schemes fall into three general classifications. There is the magnetic machine, the hydraulic type, and the centrifugal. The commonest example of the first is an inclined plane, with a steel ball and a magnet at the top to draw the ball up. Just below the magnet a slot in the track is supposed to allow the ball to drop to a lower plane, and return to the starting point, when the process would be repeated. As far back as 1579 inventors were flirting with the idea, and Bishop Wilkins in his “Mathematical Magick” describes it at length, with a picture of the device as it would appear in operation. Even the good Bishop knew it wouldn’t work, and later in his book admits the fact that no magnet powerful enough to pull the ball to the top would release it to let it fall through the slot.

The hydraulic type is usually some arrangement of tubes or tanks in which the weight of a liquid in a tank of large diameter, escaping through a small outlet in the bottom, is supposed to force liquid up through a tube of small diameter, and thus perpetually renew the supply. The fact that liquid seeks its own level should convince any one that the scheme will not work, yet the idea is born again in some fertile brain 11 east once a week.

The centrifugal type is usually some variation of a wheel with pivoted arms, weighted at the outer end, the theory being that the extended arms on the descending side will, because of the greater distance from the center, lift the arms on the opposing side, which are so pivoted that they hang closer to the hub. As most everyone knows the farther a weight is from the point of leverage the greater the force exerted, and on paper most of the wheel schemes look feasible. Unfortunately a drawing doesn’t show that when the initial impulse is absorbed the wheel will find a point where the two forces are exactly balanced and come to rest. Sir Walter Raleigh is one of the most famous builders of such a wheel. Selling stock in a perpetual motion machine, or an interest in the invention, would not appear to be a profitable field of finance, yet the court records are full of just such cases. In more than one instance a company has successfully financed the impossible, and sometimes exhibited a machine that actually appeared to work, but always there was fraud concealed somewhere about it. The fraud was well concealed, but it was just as much there as it is in those machines, much frowned on by Uncle Sam, which are supposed to convert plain paper into dollar bills. And, curiously enough, I never heard of but one case where the “money making” machine was supposed to turn out anything larger than dollar bills, though it must be apparent that if it could do that it would be just as easy to make fives, tens, twenties, or anything larger.

One other curious thing about perpetual motion is that I have never heard of a woman inventor wasting time on it, though they are well represented in the practical fields of invention.

As pointed out in previous articles in this series, the only limit to one’s success in the field of invention is that set by individual aptitudes and limitations. Bearing in mind always that a simple device is more likely to return a profit to the young inventor than a complicated contrivance, the second fad or to bear in mind is that success comes to the man who works in the field he knows most about. For instance, if you are a chemist, the chances are much more probable that something you have invented of a chemical nature will return a profit than if you go far afield.

As an example of the importance of slicking to your own field, take the case of Thomas W. Hicks, Los Angeles agronomist. He has perfected a process for neutralizing the deleterious effect of salt water on plants and is now ready to convert huge quantities of sea water into a nutritious, fertilizing plant food, making use of the natural mineral elements present in the water. The basis of his process lies in treating the sea water with a high frequency current.