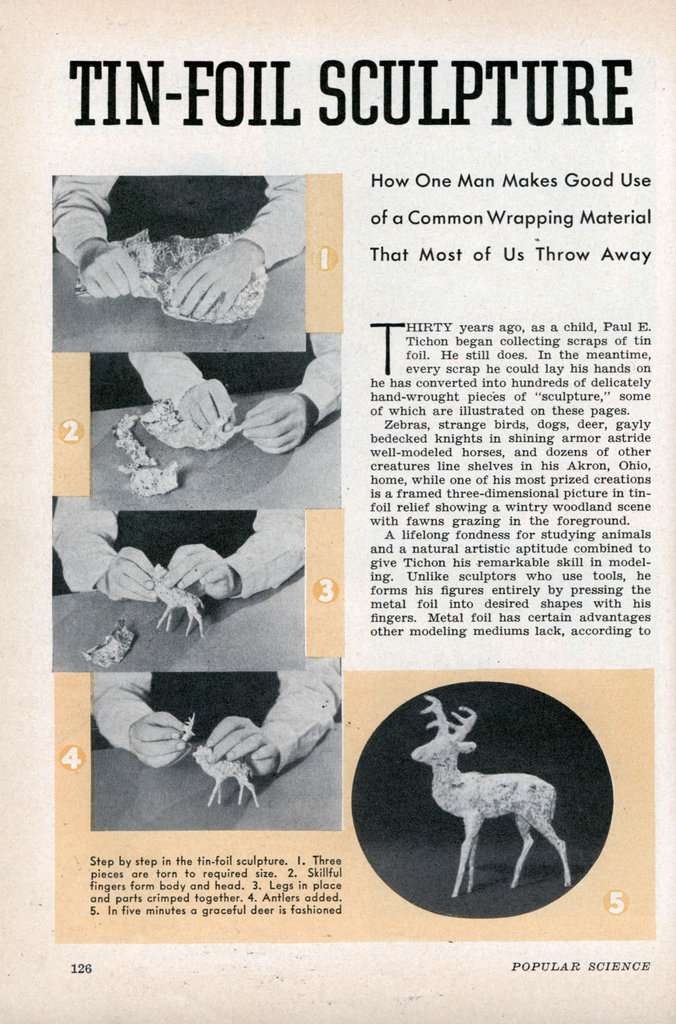 THIRTY years ago, as a child, Paul E. Tichon began collecting scraps of tin foil. He still does. In the meantime, every scrap he could lay his hands on he has converted into hundreds of delicately hand-wrought pieces of “sculpture,” some of which are illustrated on these pages.

Zebras, strange birds, dogs, deer, gayly bedecked knights in shining armor astride well-modeled horses, and dozens of other creatures line shelves in his Akron, Ohio, home, while one of his most prized creations is a framed three-dimensional picture in tinfoil relief showing a wintry woodland scene with fawns grazing in the foreground.

A lifelong fondness for studying animals and a natural artistic aptitude combined to give Tichon his remarkable skill in modeling. Unlike sculptors who use tools, he forms his figures entirely by pressing the metal foil into desired shapes with his fingers. Metal foil has certain advantages other modeling mediums lack, according to Tichon. It is yielding enough to be pressed into shape, yet it does not spring out of shape when pressure is removed. And, as it crinkles under pressure, it becomes stronger just as corrugated metal is stronger than sheet metal.

A capable artist familiar with painting in oils, Tichon quite naturally tried combining his two talents. The result was more than satisfactory. Now he hand-paints his zebras, for example, in true-to-life colors and patterns which, as he jokingly puts it, enable people to distinguish his zebras from his jackasses. Paint solved another perplexing problem for him—the obtaining of lifelike faces. Details of eyes, nostrils, and other features applied with artists’ oil colors did the trick.

Tichon’s animals are usually made of only two or three pieces of foil which he first cuts to approximate sizes. They are pressed, modeled, bent, and folded to form the figures, then crimped together. So agile are his fingers that he can model a deer in less than five minutes. He has trained himself so thoroughly that he can make from memory in a surprisingly short time a realistic tin-foil figure of almost any species of bird or beast you can mention to him.