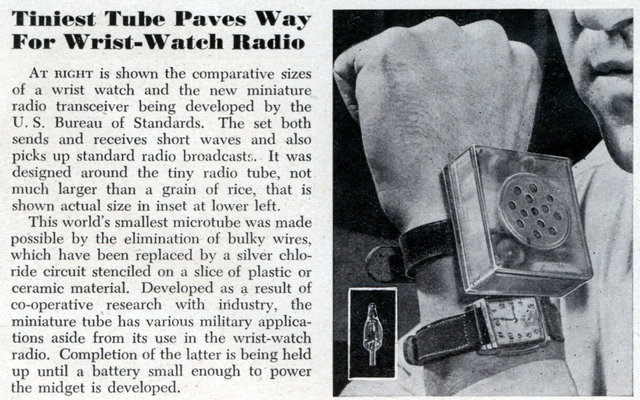 At right is shown the comparative sizes of a wrist watch and the new miniature radio transceiver being developed by the U. S. Bureau of Standards. The set both sends and receives short waves and also picks up standard radio broadcasts. It was designed around the tiny radio tube, not much larger than a grain of rice, that is shown actual size in inset at lower left.

This world’s smallest microtube was made possible by the elimination of bulky wires, which have been replaced by a silver chloride circuit stenciled on a slice of plastic or ceramic material. Developed as a result of co-operative research with industry, the miniature tube has various military applications aside from its use in the wrist-watch radio. Completion of the latter is being held up until a battery small enough to power the midget is developed.