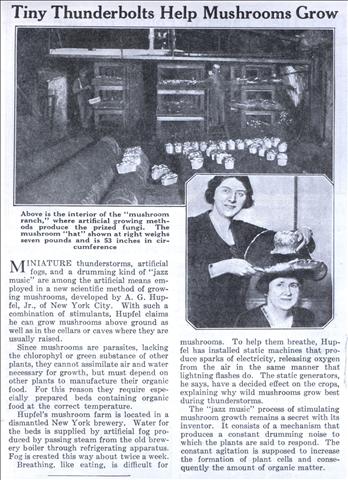 MINIATURE thunderstorms, artificial fogs, and a drumming kind of “jazz music” are among the artificial means employed in a new scientific method of growing mushrooms, developed by A. G. Hupfel, Jr., of New York City. With such a combination of stimulants, Hupfel claims he can grow mushrooms above ground as well as in the cellars or caves where they are usually raised.

Since mushrooms are parasites, lacking the chlorophyl or green substance of other plants, they cannot assimilate air and water necessary for growth, but must depend on other plants to manufacture their organic food. For this reason they require especially prepared beds containing organic food at the correct temperature.

Hupfel’s mushroom farm is located in a dismantled New York brewery. Water for the beds is supplied by artificial fog produced by passing steam from the old brewery boiler through refrigerating apparatus. Fog is created this way about twice a week.

Breathing, like eating, is difficult for mushrooms. To help them breathe, Hupfel has installed static machines that produce sparks of electricity, releasing oxygen from the air in the same manner that lightning flashes do. The static generators, he says, have a decided effect on the crops, explaining why wild mushrooms grow best during thunderstorms.

The “jazz music” process of stimulating mushroom growth remains a secret with its inventor. It consists of a mechanism that produces a constant drumming noise to which the plants are said to respond. The constant agitation is supposed to increase the formation of plant cells and consequently the amount of organic matter.