Popular Mechanics
Issue: Mar, 1924
Posted in: Sign of the Times
8 Comments on TOBACCO SMOKE NOT HARMFUL ACCORDING TO MINE TEST (Mar, 1924)

TOBACCO SMOKE NOT HARMFUL ACCORDING TO MINE TEST (Mar, 1924) 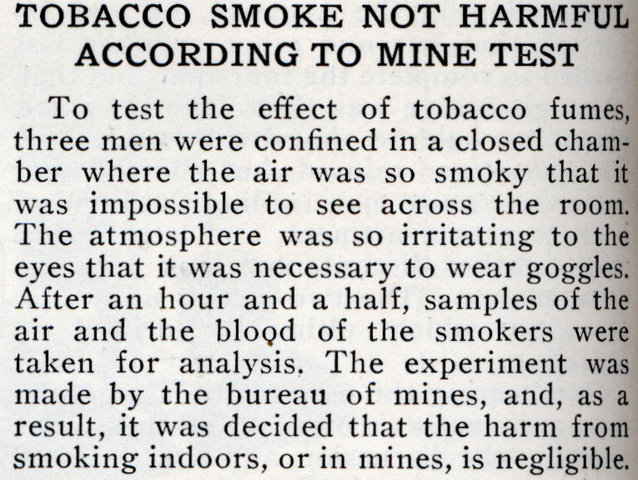 TOBACCO SMOKE NOT HARMFUL ACCORDING TO MINE TEST
To test the effect of tobacco fumes, three men were confined in a closed chamber where the air was so smoky that it was impossible to see across the room. The atmosphere was so irritating to the eyes that it was necessary to wear goggles. After an hour and a half, samples of the air and the blood of the smokers were taken for analysis. The experiment was made by the bureau of mines, and, as a result, it was decided that the harm from smoking indoors, or in mines, is negligible.