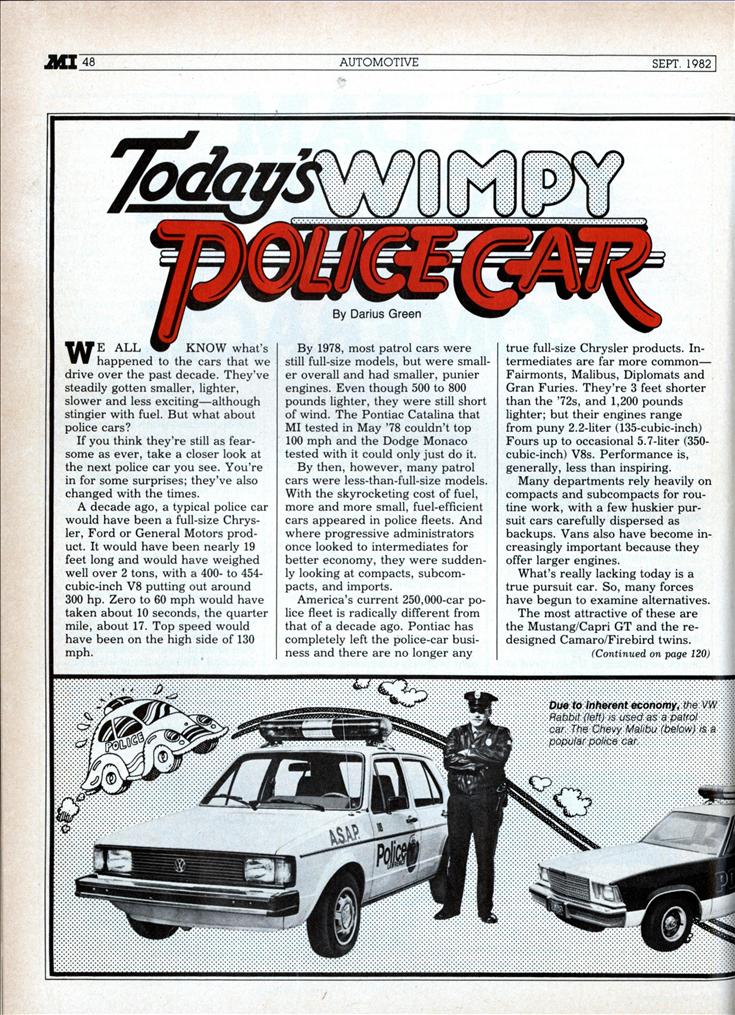 WE ALL KNOW what’s happened to the cars that we drive over the past decade. They’ve steadily gotten smaller, lighter, slower and less exciting—although stingier with fuel. But what about police cars?

If you think they’re still as fearsome as ever, take a closer look at the next police car you see. You’re in for some surprises; they’ve also changed with the times.

A decade ago, a typical police car would have been a full-size Chrysler, Ford or General Motors product. It would have been nearly 19 feet long and would have weighed well over 2 tons, with a 400- to 454-cubic-inch V8 putting out around 300 hp. Zero to 60 mph would have taken about 10 seconds, the quarter mile, about 17. Top speed would have been on the high side of 130 mph.

By 1978, most patrol cars were still full-size models, but were smaller overall and had smaller, punier engines. Even though 500 to 800 pounds lighter, they were still short of wind. The Pontiac Catalina that MI tested in May ’78 couldn’t top 100 mph and the Dodge Monaco tested with it could only just do it.

By then, however, many patrol cars were less-than-full-size models. With the skyrocketing cost of fuel, more and more small, fuel-efficient cars appeared in police fleets. And where progressive administrators once looked to intermediates for better economy, they were suddenly looking at compacts, subcompacts, and imports.

America’s current 250,000-car police fleet is radically different from that of a decade ago. Pontiac has completely left the police-car business and there are no longer any true full-size Chrysler products. Intermediates are far more common— Fairmonts, Malibus, Diplomats and Gran Furies. They’re 3 feet shorter than the ’72s, and 1,200 pounds lighter; but their engines range from puny 2.2-liter (135-cubic-inch) Fours up to occasional 5.7-liter (350-cubic-inch) V8s. Performance is, generally, less than inspiring.

Many departments rely heavily on compacts and subcompacts for routine work, with a few huskier pursuit cars carefully dispersed as backups. Vans also have become increasingly important because they offer larger engines.

What’s really lacking today is a true pursuit car. So, many forces have begun to examine alternatives.

The most attractive of these are the Mustang/Capri GT and the redesigned Camaro/Firebird twins.

With their large V8s, four-speed transmissions and well-thought-out suspensions, they are quick, impressive in handling and fast. The Mustang, for instance, is geared for 135 mph. The California Highway Patrol, duly impressed, has ordered 400. So California, you’d better watch your mirrors!

If you’ve ever wondered whether police cars are really special, the answer is a qualified yes: Some models have reinforced chassis, heavier-gauge frames, sturdier suspension components and soon. They also have higher-performance engines, transmissions, cooling systems, alternators and tires. (What you probably won’t see, though, are steel-belted radials. Many aren’t suited to extended high speeds. Textile-belted radials are the general rule there.) Other police cars are just ordinary civilian models with the necessary police equipment hung on. Sometimes this is because they’ll see only light duty, but frequently it’s because their departments buy only from the lowest bidder. Suddenly flung into rough service, many of these low-bid specials quickly self-destruct.

Police cars developed in two ways. Originally, law enforcement organizations gave manufacturers detailed lists of design specifications, stipulating things like shock-absorber diameter and frame thickness. The manufacturers then incorporated those requirements into their cars. But the result was frequently a heavier and costlier car with no performance improvement.

Recently, however, the trend has been to give the manufacturers performance standards, detailing what the cars are expected to do. This way the manufacturers can develop optimum solutions without adding needless weight or expense.

Some departments are so affected by costs these days that they are fixing up old units and keeping them considerably longer. Of course, some do this just because it’s the only way they can get bigger cars or better performance. . , A bit of the mechanical work does get out of hand, though. You see, with the exception of a couple of recent exemptions in California, the same federal and state standards for safety, fuel economy and emissions that all cars are subject to also have emasculated police cars. Certain jurisdictions, however, have taken matters into their own hands and have been caught and fined heavily for removing catalytic converters and running their cars on leaded fuel. Others have likely fiddled with equipment to boost performance. As this is written, the International Association of Chiefs of Police is trying to gel a few minor emissions-standard exemptions so that police cars can perform better.

As much change as the past decade has brought, the next should bring even more. Ultimately, like other cars, most police cars will probably be front drive. In 1983, for instance, Ford’s front-drive Topaz series will replace Fairmont and Zephyr, popular police cars, and a police variant would be logical. In 1984 Chevrolet will offer a police version of Celebrity, replacing the Malibu. And Chrysler’s K-Cars, of course, are already available with police packages.

Coincidental with the changeover to front drive is a philosophical change about high-speed pursuit. Many police departments are giving in to their better judgment and to the growing public outcry about the dangers.

Oh, there still will be fast pursuit cars out there, but fewer and fewer actually will engage in all-out highspeed chases. They have lots of friends patrolling; and even if the fleeing driver should happen to have a full-race engine, he’s going to find it virtually impossible to outrun the police car’s full-race- radio. Up ahead a roadblock will be patiently waiting.