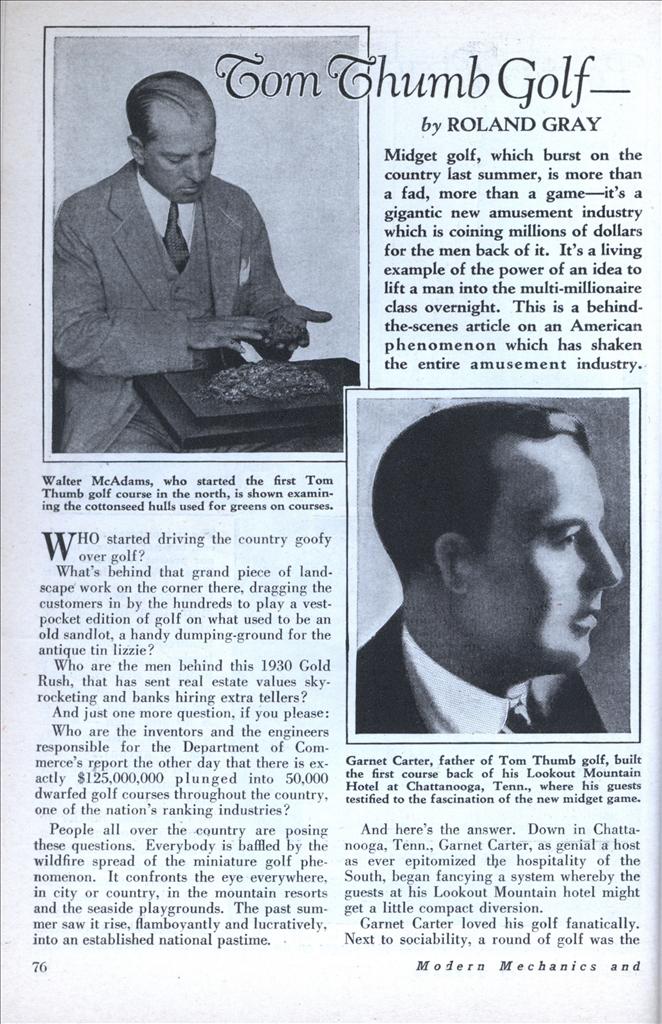 Midget golf, which burst on the country last summer, is more than a fad, more than a gameâ€”it’s a gigantic new amusement industry which is coining millions of dollars for the men back of it. It’s a living example of the power of an idea to lift a man into the multi-millionaire class overnight. This is a behind-the-scenes article on an American phenomenon which has shaken the entire amusement industry.

WHO started driving the country goofy over golf? What’s behind that grand piece of landscape work on the corner there, dragging the customers in by the hundreds to play a vest-pocket edition of golf on what used to be an old sandlot, a handy dumping-ground for the antique tin lizzie?

Who are the men behind this 1930 Gold Rush, that has sent real estate values skyrocketing and banks hiring extra tellers?

And just one more question, if you please: Who are the inventors and the engineers responsible for the Department of Commerce’s report the other day that there is exactly $125,000,000 plunged into 50,000 dwarfed golf courses throughout the country, one of the nation’s ranking industries?

People all over the country are posing these questions. Everybody is baffled by the wildfire spread of the miniature golf phenomenon. It confronts the eye everywhere, in city or country, in the mountain resorts and the seaside playgrounds. The past summer saw it rise, flamboyantly and lucratively, into an established national pastime.

And here’s the answer. Down in Chattanooga, Tenn., Garnet Carter, as genial a host as ever epitomized the hospitality of the South, began fancying a system whereby the guests at his Lookout Mountain hotel might get a little compact diversion.

Garnet Carter loved his golf fanatically. Next to sociability, a round of golf was the next approach to happiness. Mr. Carter wasn’t out for pelf, mind you. He was a wealthy man in his own right. But it was Mr. Carter’s unselfish motive to impart to others the happiness which he enjoyed.

The Fairyland Golf Club which Mr. Carter operated in conjunction with his hotel cost him $300,-000. It was a highly developed layout. Near the clubhouse he set up a practice putting green. Nothing very swell about it. But he just had a little extra space there, so he decided to use it in this fashion. In time this little area was turned into a short pitch and putt course. It was blended with the clubhouse grounds.

The very observing Mr. Carter was surprised to find that most of the clubhouse guests tarried for rather long spells on the small pitch and putt course before going out on the major links. He noticed what a keen, insatiate interest some of the players showed in this. So one day, quite jokingly, he called his little creation his Tom Thumb course.

He started charging a fee for the use of his Tom Thumb course. This did not cut down the demand for it. It continued to grow in popu larity. Finally, he realized that the use of real turf on a course of this nature was an expensive proposition.

Mr. Carter spent an entire morning ruminating, trying to devise some substitute for green and living grass on his fairways. Suddenly, he thought of cotton seed hulls. He recalled boyhood days around plantations and how the â€¢cotton-raisers berated the nuisance of the cotton seed hulls. The hulls are the outer covering or the crust of the cotton boll.

The cotton seed hulls were certain to answer Mr. Carter’s problem, so he started a quiet investigation, only to find that a few years previously Thomas Fairbairn, a cotton grower, of Durango, New Mexico, not far from El Paso, Texas, had already obtained a patent on cotton seed hulls for golf greens.

Fairbairn was a lover of golf, but living on an isolated plantation could not satisfy his ardor for the game. Quite by chance he noticed what a good carpet cotton seed hulls would make, that a ball would roll true on such a layer, and eventually confided his discovery to an El Paso lawyer. The latter advised him to get a patent on it, which he did. It didn’t mean anything in those days, but it did when Mr. Carter hit on the same idea. It meant that Fairbairn was to be paid $100,000 outright for the patent rights.

Then last spring Mr. Carter organized the Fairyland Manufacturing Company to build his Tom Thumb miniature golf courses. Instantly he was swamped with or ders. The demand was beyond his wildest dreamsâ€”though he did vision rather bountiful returns on his investment.

Mr. Carter, it was quite evident, was “in the dough,” to use the vernacular. He was besieged with orders from every nook and cranny in the surrounding country. Then there came to him William S. Townsend and A. J. Townsend, two engineers who were the pioneer manufacturers of visible pumps. They made the gasoline station pumps where the buyer can see the flow and registering of the gasoline. They were laughed at, in the beginning, when they tried to float the nation with their product, but theirs was the last big smile when they were bought out for $2,000,000.

At the same time Walter McAdams, an associate of the Townsends, was sent around i to places where the Tom Thumb courses had been installed. Then he was sent into other sections of the country, including Florida, to make a survey of the field which might be considered for the spread of the pint-sized golf courses. Mr. McAdams had previously been engaged for similar regional studies by Henry Ford.

The Townsends completed successful negotiations with the Chattanooga hotel man. It was agreed that they would plant the Tom Thumb courses north of the Mason-Dixon line while Mr. Carter would parcel them out to the South. Thereupon the National Pipe Products Corporation, headed by the Townsends and with offices in the Chrysler Building, New York, added the Tom Thumb Golf Corporation to its holdings and created a branch in Toronto, Canada. It was this organization which supplied to the United States Department of Commerce the figures which revealed that the miniature golf course has blossomed into a $125,000,000 industry.

Walter McAdams started the first Tom Thumb course going in the North early last summer. It was a sort of experiment and feeler. It was erected in Elmhurst, Long Island. It was run day and night. In the evening playing was made possible by big floodlights. The first month netted him $1,000 in profit. The third month brought in the bonanza of $3,000 clear of expenses.

Since then the Tom Thumbers have cropped up like mushrooms. In the New York metropolitan area there were 2,000 such courses up to the middle of last September. From the Battery to the Bronx, in every space available, Tom Thumbs were appearing over-night. Coney Island and other beach resorts were speckled with them. At Asbury Park they were kept in operation until four a. m. on Sunday mornings. It was not unusual to find people in evening clothes playing a round of golf on the abbreviated fairways.

Out in Long Beach, Long Island, they got the mayor to officiate at the opening ceremonies of one of the golf courses. Atlantic City’s heart went pitter-patter over them. Hollywood couldn’t resist them and ultra-aristocratic and high-hat Newport just could not say “No.” Its devotees ranged from near-par linksmen to duffers who couldn’t tell the difference between a mashie and a plugged nickel. But everybody knew it was golf, the same kind of golf that Bobby Jones and Tommy Armour play, cut to order.

All the paraphernalia was there. The Tom Thumb courses have eighteen holes, all numbered by a regular flag-tag. Although there is seldom more than fifteen yards between tees, the starting-point for a hole, and the green, where the hole is actually located, you have water hazards, hummocks, bunkers and “roughs” which can make your game both a joy and an exasperation. You also have a gallery which watches your game from behind a fence, which adds somewhat to the hazard.

Par for the complete small-course game is 42. That is considered the perfect score for 18 holes. That means that there are 12 holes for which th par is 2, meaning that you have two strokes to make each of those holes. The flag which designates the number of the hole also tells how many strokes you are entitled to. And par for the remaining 6 holes is three.

There is nothing complicated, no befuddling rules, in this game. The regulation golf ball is used and the most common golf club used is a putter, which is brought into play in the orthodox game when a ball is close to a hole.

The cottonseed hulls for the fairways are treated with special patented chemicals and are green, simulating grass. Before this one-half layer of artificial grass is laid, there is a ditch dug six inches deep. This is filled with ordinary cinders, affording a resilient cushion effect as well as a drainage for the water which seeps through in stormy weather.

The miniature golf courses, because of their sudden rise to sports eminence, have provided much food for thought for inventors, as has been evident from the securing of materials to replace the costly grass and for doping out hazards as well as the general plan of an 18-hole course. One of the most delicate tasks which engineers had to cope with was to obtain a proper calibration on angles of shots. Since par is 42, it is not utterly beyond reason, the angles and the hazards have been so compiled as to make a human goal. With the architects, machinists, woodworkers and artists who are employed in turning out each baby-golf course, and with plans underway for installing similar courses indoors for the winter golf enthusi- asts, the Department of Commerce did not go far astray in recognizing it among the country’s most thriving enterprises.

In October Garnet Carter’s Lookout Mountain Tom Thumb Golf course was the setting for a national tournament. The first prize was $5,000. Just before the national tourney plans were announced, Mr. Carter received from the Townsends the balance * of his royal ties of $ 1,000,000 to allow his idea of miniature golf to be installed north of the Mason-Dixon line. To one of the Town-sends he wrote, by way of acknowledging the check, “Whenever you’re down this way, drop around for a little Tom Thumb golf. I love the gosh-dang game.”