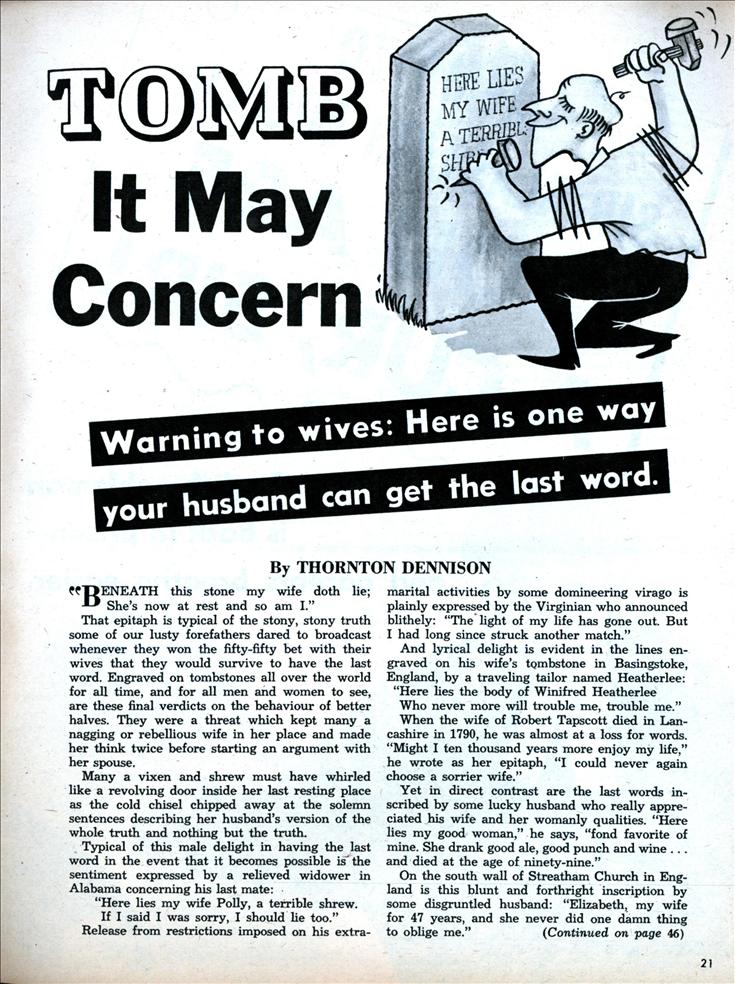 TOMB It May Concern

Warning to wives: Here is one way your husband can get the last word.

“BENEATH this stone my wife doth lie; She’s now at rest and so am I.”

That epitaph is typical of the stony, stony truth some of our lusty forefathers dared to broadcast whenever they won the fifty-fifty bet with their wives that they would survive to have the last word. Engraved on tombstones all over the world for all time, and for all men and women to see, are these final verdicts on the behaviour of better halves. They were a threat which kept many a nagging or rebellious wife in her place and made her think twice before starting an argument with her spouse.

Many a vixen and shrew must have whirled like a revolving door inside her last resting place as the cold chisel chipped away at the solemn sentences describing her husband’s version of the whole truth and nothing but the truth.

Typical of this male delight in having the last word in the event that it becomes possible is the sentiment expressed by a relieved widower in Alabama concerning his last mate: “Here lies my wife Polly, a terrible shrew.

If I said I was sorry, I should lie too.”

Release from restrictions imposed on his extra- marital activities by some domineering virago is plainly expressed by the Virginian who announced blithely: “The light of my life has gone out. But I had long since struck another match.”

And lyrical delight is evident in the lines engraved on his wife’s tombstone in Basingstoke, England, by a traveling tailor named Heatherlee: “Here lies the body of Winifred Heatherlee Who never more will trouble me, trouble me.”

When the wife of Robert Tapscott died in Lancashire in 1790, he was almost at a loss for words. “Might I ten thousand years more enjoy my life,” he wrote as her epitaph, “I could never again choose a sorrier wife.”

Yet in direct contrast are the last words inscribed by some lucky husband who really appreciated his wife and her womanly qualities. “Here lies my good woman,” he says, “fond favorite of mine. She drank good ale, good punch and wine … and died at the age of ninety-nine.”

On the south wall of Streatham Church in England is this blunt and forthright inscription by some disgruntled husband: “Elizabeth, my wife for 47 years, and she never did one damn thing to oblige me.”

Slight confusion seems to crowd the issue when we read the epitaph penned for his late wife by Thomas Round in St. Swithin’s churchyard, Manchester, England. “Here lies the body of Dorothy Round,” he announces. “I lost her at sea and she never was found.”

Retribution in the form of a bolt of lightning obligingly brought to an abrupt end the nagging endured by Jon Wise of Edinburgh. He expresses his relief as follows: “Thankful am I that here lies My shrewish wife, Mary Wise.

And in Sunbury Churchyard is a disgruntled husband’s pointed and scathing opinion of his choice of spouse: “Here lies my beast of a first wife,” he says.

But close by, as though warning all men of disaster if they write epitaphs like that, is a verse with threatening overtones: “Oh! Do not weep, my husband dear; I am not dead, but sleeping here; Then mend your ways, prepare to die, For you are soon to come to I.”

Painted under this gold lettering is the husband’s bold reply.

“I do not weep, my dearest life, For I have got another wife; Therefore, I cannot come to thee, For I must go to cherish she.”

Another widower who showed a marked tendency to rejoice in his loss blossomed forth with the following: “This dear little spot is the joy of my life, It raises my flowers and covers my wife.”

Jane Cathew’s epitaph was obviously composed by her relatives—who had their own idea about her married life. The lines they wrote have achieved, a classic stature in graveyard literature: “Here lies the body of Jane Cathew, Born at St. Colomb, died at St. Ewe.

Children she had five.

Three are dead, and two alive, Those that are dead choosing rather To die with their mother than live with their father.”

On a tombstone in a churchyard near Cheltenham, England, we find the last sentiments of a wife and her three daughters who apparently goaded the man of the house into performing mass murder by poison: “Here lies I, and my three daughters; So much for drinking my husband’s waters.

If we had kept to Epsom salts, He would not have dropped us in these ‘ere vaults.”

(“Waters” meant hard liquor.) There are a few honest men, however, who looked on the passing of their spouses with a feeling that maybe they did fail to reach the standards of male perfection which women ‘dream about. Such an abject admission is contained in these final lines: “She lived with her husband fifty years And died in the hope of a better life.”