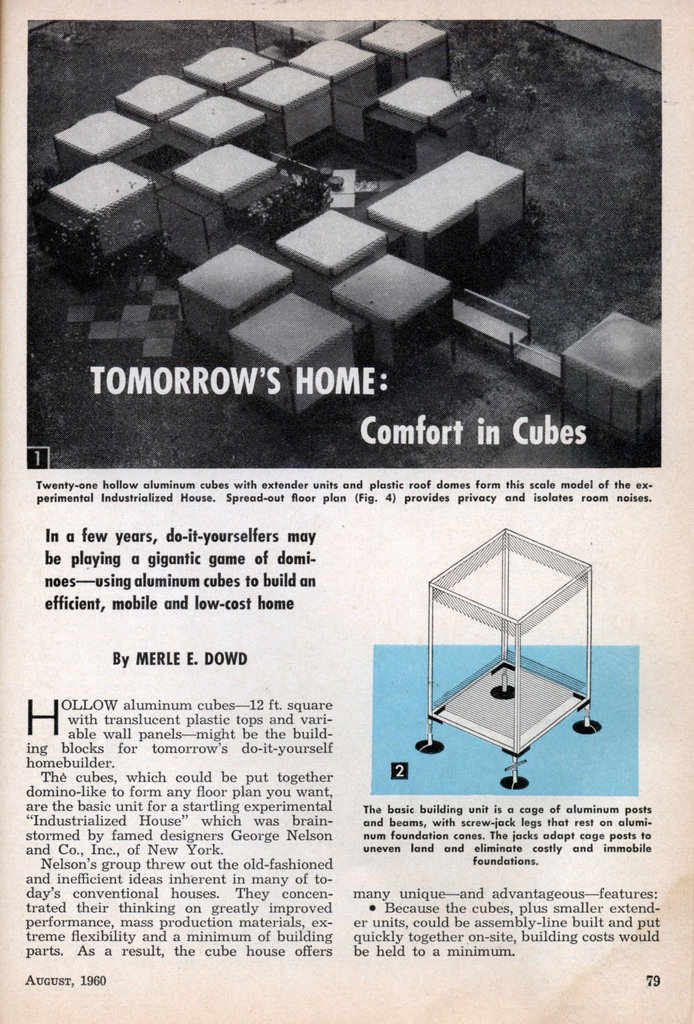 In a few years, do-it-yourselfers may be playing a gigantic game of dominoesâ€”using aluminum cubes to build an efficient, mobile and low-cost home

The cubes, which could be put together domino-like to form any floor plan you want, are the basic unit for a startling experimental “Industrialized House” which was brain-stormed by famed designers George Nelson and Co., Inc., of New York.

Nelson’s group threw out the old-fashioned and inefficient ideas inherent in many of today’s conventional houses. They concentrated their thinking on greatly improved performance, mass production materials, extreme flexibility and a minimum of building parts. As a result, the cube house offers many uniqueâ€”and advantageousâ€”features:

â€¢ Because the cubes, plus smaller extender units, could be assembly-line built and put quickly together on-site, building costs would be held to a minimum.

â€¢ Use of lightweight anodized aluminum would eliminate many maintenance problems and the need for footings and foundations. Instead, the cubes would rest on aluminum cones, with a screw-jack between the cube and the cone to adjust for uneven ground levels.

â€¢ If desired, the house could easily be disassembled, packed on a trailer and moved to a new location.

Covering the Cubes. Nelson recognized that most people are used to getting light from above. So the cubes’ roofs would be domed

skylights, made of several layers of translucent plastic for natural lighting during the day. In areas where glare is troublesome, vari-colored liquids could be pumped into the air space between the layers. At night, soft indirect lighting would come from lamps in edge coves.

To cover the sides of the cubes, you would choose from a wide variety of interchangeable wall panels, which could be just simple walls or could have built-in picture windows, furniture, storage cabinets or shelves (Fig. 5).

To increase the flexibility of the basic cube and to provide corridors, 4 by 12-ft. extender units could be joined to the larger blocks. Where larger rooms are wanted, two or more of the cubes could be combined.

Why the helter-skelter room arrangement of the house shown in Figs. 1 and 4? It was carefully laid out that way to provide the utmost in privacy and quiet.

Massive wallsâ€”such as 3 ft. or so of concreteâ€”will completely stop noise. But thin walls, like those in most homes, only muffle sounds, and in a factory-built house like Nelson’sâ€”where light weight is a mustâ€”unrestricted noise could be a serious problem.

So Nelson’s solution was to separate the rooms and join them by corridors made of the smaller extender units. Since the cube house offers complete design freedom, it can be perfectly adjusted to the building site to provide the desired seclusion and quiet. The separated rooms also solve the problem of ventilation in areas where year-round air conditioning will not be built in. Small conditioner and heater units could be installed where wanted, or the insulated floor panels could be heated radiantly. In cold climates, aluminum panels could extend from the cubes to the ground to prevent cold air from blowing under the floors.

Easy Mobility and a minimum of on-site labor are necessary before homes can be truly factory-built and sold over the counter with anywhere near the same success as automobiles or refrigerators. The Industrialized House, by using only two basic building units and a variety of wall panels, fills these requirements.

The minimum number of parts could be manufactured on an assembly line and stocked in regional warehouses. You could shop in a store, pick out the building units you need, then have them delivered to your lot after having standard utility hook-ups in-stalled at the site. Package units for heating or all-season air conditioning, kitchens and baths would fit into each cube as desired and would be independent of any large, overall system. A day after the components arrived, you would be living in your new house.

Then, suppose your company transferred you to another part of the country. Instead of going through the delays, expense and mental turmoil of selling your house and finding another, you could simply take down your cube house and ship it to your next location, along with your personal goods.

There, a day’s work would see your house set up on a new lot. You would already feel at home in it, your furniture would fit itâ€” and you might even decide to add another room or change the room arrangement, all for less than the cost of two real estate commissions and the intangible losses that come from the usual frustrations of selling, moving and rebuying.

As yet, neither a projected sales date or cost of the Nelson cube house has been set, nor has one of the homes actually been built. But in a few years, when the last major product we all useâ€”the homeâ€”is fully adapted to factory production, we may all enjoy comfort in cubes.