Modern Mechanix
Issue: May, 1932
Posted in: Music
10 Comments on Tones of New Stringless Cello Generated by Electricity (May, 1932)

Tones of New Stringless Cello Generated by Electricity (May, 1932) 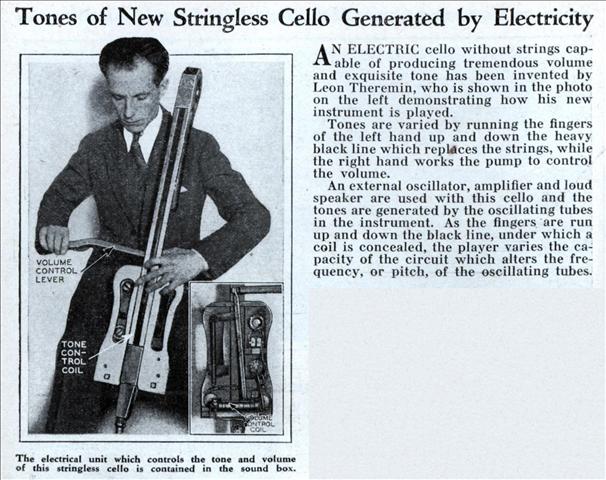 AN ELECTRIC cello without strings capable of producing tremendous volume and exquisite tone has been invented by Leon Theremin, who is shown in the photo on the left demonstrating how his new instrument is played.

Tones are varied by running the fingers of the left hand up and down the heavy black line which replaces the strings, while the right hand works the pump to control the volume.

An external oscillator, amplifier and loud speaker are used with this cello and the tones are generated by the oscillating tubes in the instrument. As the fingers are run up and down the black line, under which a coil is concealed, the player varies the capacity of the circuit which alters the frequency, or pitch, of the oscillating tubes.