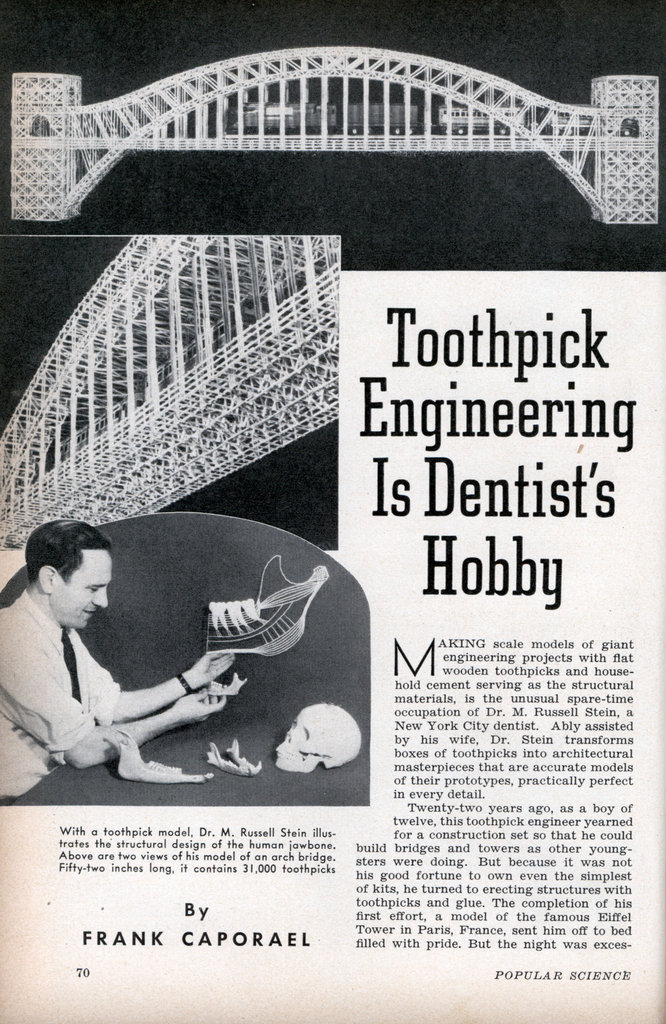 MAKING scale models of giant engineering projects with flat wooden toothpicks and household cement serving as the structural materials, is the unusual spare-time occupation of Dr. M. Russell Stein, a New York City dentist. Ably assisted by his wife, Dr. Stein transforms boxes of toothpicks into architectural masterpieces that are accurate models of their prototypes, practically perfect in every detail.

Twenty-two years ago, as a boy of twelve, this toothpick engineer yearned for a construction set so that he could build bridges and towers as other youngsters were doing. But because it was not his good fortune to own even the simplest of kits, he turned to erecting structures with toothpicks and glue. The completion of his first effort, a model of the famous Eiffel Tower in Paris, France, sent him off to bed filled with pride. But the night was excessively warm and morning found his model nothing but a tangled mass of sticks. The heat had melted the glue.

Undeterred by this tragedy, the lad began to experiment with various materials until he found just the right combination of flat toothpicks and household cement. Today he still uses the same simple materials, but his present intricate projects are far beyond his wildest boyhood dreams. Take his working model of a giant Ferris wheel. This required one and a half months to build, and 27,000 toothpicks went into its construction. Each of its twenty-four cars swings on a pivot to maintain a horizontal position as the main wheel revolves. An accurately constructed gear arrangement drives the Ferris wheel on a dowel-rod shaft that employs a collar button as a main supporting bearing.

Dr. Stein usually begins his projects by laying them out on paper. Each section is designed and then made in a single flat plane, by placing the toothpicks along the lines of the drawing and then cementing them together. To speed the work, toothpicks are cemented together in advance, in lengths of two, three, and four. Small cutting pliers are the only tool used. When all the flat planes are complete, they are tied together with string and cemented in place. In addition to its entertainment value, Dr. Stein says that his hobby helps him in mastering problems in dentistry, and in his work as a lecturer on anthropology.

Despite their lacy, delicate appearance, the toothpick models have astounding strength. A small bridge, for instance, that tips the scales at less than half an ounce will safely support a flatiron weighing six pounds, 192 times its own weight.