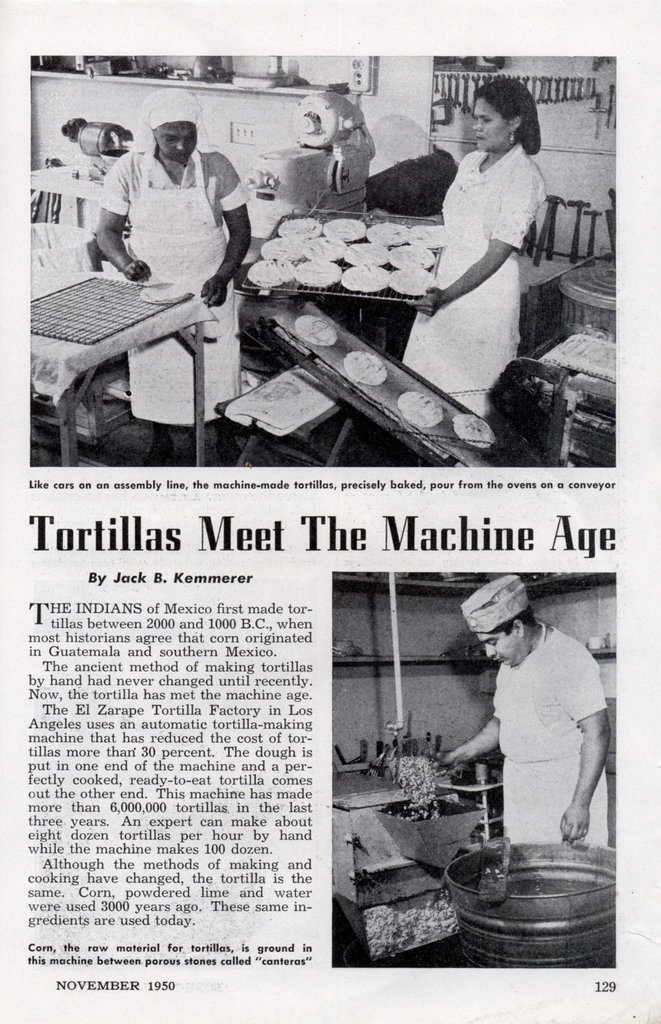 The El Zarape Tortilla Factory in Los Angeles uses an automatic tortilla-making machine that has reduced the cost of tortillas more than 30 percent. The dough is put in one end of the machine and a perfectly cooked, ready-to-eat tortilla comes out the other end. This machine has made more than 6,000,000 tortillas in the last three years. An expert can make about eight dozen tortillas per hour by hand while the machine makes 100 dozen.

Although the methods of making and cooking have changed, the tortilla is the same. Corn, powdered lime and water were used 3000 years ago. These same ingredients are used today.

The dried corn and lime are cooked slowly for several hours to soften the hull of the corn. After cooking, the grain sets overnight and is ground the following morning.

Grinding is done by a machine which uses two porous stones. These stones, called “canteras,” are found only in Mexico. A stream of cool water flows on the stones during the grinding. The water goes through the porous stones keeping them cool and at the same time adds the required amount of water to the grain. If the stones were to get hot during the grinding the corn would be overcooked.

After grinding, the corn is rinsed to remove part of the hull, the remainder being left in the dough to add body to the finished tortilla. The corn is then kneaded into a stiff dough and is ready for the machine.

The dough, placed in the hopper of the machine, is rolled flat by two bronze rollers. These rollers are adjustable and the dough may be rolled to any thickness.

The cutter, which is a curved disk located below the rollers, rotates against the front roller and cuts a tortilla with each revolution. After being cut, the dough is carried on a canvas belt to the asbestos conveyor of the first oven.

The three gas ovens are located one above the other. Each oven has an endless belt which carries the tortilla through it. As the tortilla leaves the first oven it turns over and falls to the oven below. When it drops from the third oven it falls onto a canvas belt and is carried from the machine. This entire operation takes one minute.

As the tortillas leave the machine they are puffed up to about three times normal size. When cool they resume their normal thickness. They are then wrapped in wax paper for delivery.

The tortilla is rather stiff which is advantageous, because it is also used as an eating utensil. Tortillas are used as plates for salads, vegetables and meats, a practical application as the dishes are then eaten instead of washed. The tortilla, whether machine or hand made, is basically what it was 3000 years ago. It has met the machine age and come out of the battle unchanged.