Mechanix Illustrated
Issue: Sep, 1938
Posted in: General, How to
No Comments on Torture Tests Tell The Truth (Sep, 1938)

That shoe tester looks like it has been taken right out of a Rube Goldberg contraption. 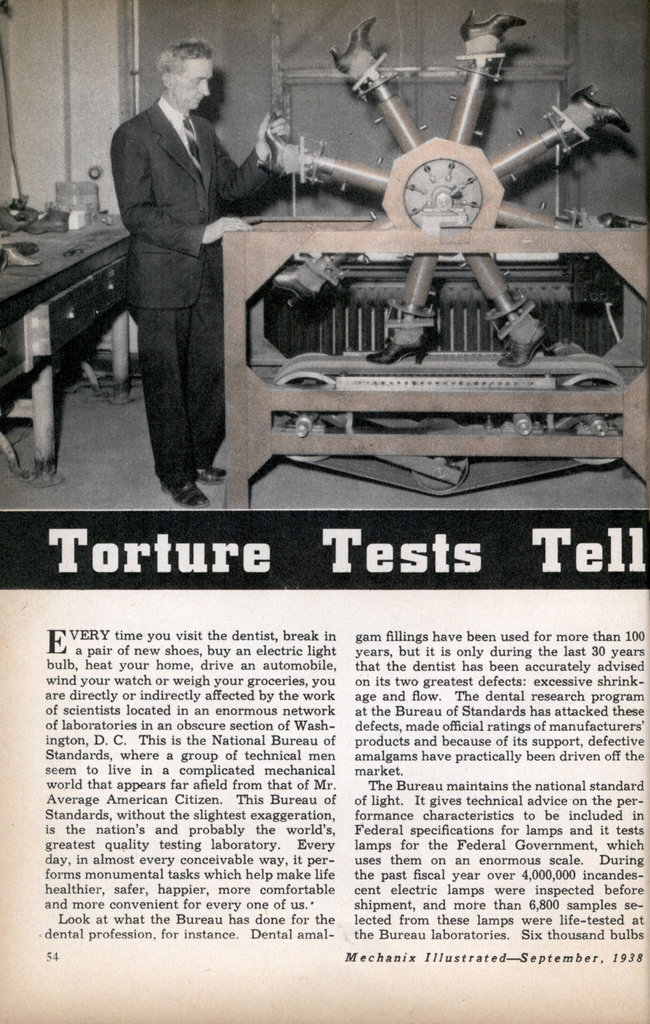 Ingenious Machines in the National Bureau of Standards help bring to light unknown facts about peas, pants, pots and paints.

EVERY time you visit the dentist, break in a pair of new shoes, buy an electric light bulb, heat your home, drive an automobile, wind your watch or weigh your groceries, you are directly or indirectly affected by the work of scientists located in an enormous network of laboratories in an obscure section of Washington, D. C. This is the National Bureau of Standards, where a group of technical men seem to live in a complicated mechanical world that appears far afield from that of Mr. Average American Citizen. This Bureau of Standards, without the slightest exaggeration, is the nation’s and probably the world’s, greatest quality testing laboratory. Every day, in almost every conceivable way, it performs monumental tasks which help make life healthier, safer, happier, more comfortable and more convenient for every one of us.

Look at what the Bureau has done for the dental profession, for instance. Dental amalgam fillings have been used for more than 100 years, but it is only during the last 30 years that the dentist has been accurately advised on its two greatest defects: excessive shrinkage and flow. The dental research program at the Bureau of Standards has attacked these defects, made official ratings of manufacturers’ products and because of its support, defective amalgams have practically been driven off the market.

The Bureau maintains the national standard of light. It gives technical advice on the performance characteristics to be included in Federal specifications for lamps and it tests lamps for the Federal Government, which uses them on an enormous scale. During the past fiscal year over 4,000,000 incandescent electric lamps were inspected before shipment, and more than 6,800 samples selected from these lamps were life-tested at the Bureau laboratories. Six thousand bulbs are tested annually on the “life testing” racks.

Whenever you buy a roll of wallpaper for your home or apartment, chances are that the Bureau of Standards, somewhere along the line, had a hand in the situation by establishing standards which give consumers practically all the information wanted concerning the quality of wallpaper based on weight, color fastness, grounding and printing. Detailed requirements are also set forth for printed, plain and embossed papers, including width of printed pattern and coverage of a single roll.

If your home is comfortable in winter, you should be grateful to technicians at the Bureau. From time to time studies are being made of all manner of house heating appliances including radiant gas heaters, thermostatic valves for radiators and fire hazards of domestic heating systems. One of the strange facts recently revealed is that painting of radiators has a marked effect on the amount of heat they will deliver to the room. When painted with bright metallic paint, such as aluminum and bronze, they supply less heat to the room than when painted with ordinary paints.

A remarkable machine in one of the Bureau laboratories tests the wear of carpets. This device produces the bending, slipping, twisting and compression of the pile that takes place when a carpet is walked upon. The durability of a carpet was found to be increased materially by increase in density or height of pile and by the use of underlays. Incidentally, this same type of machine is being used in a number of carpet manufacturers in improving their processes and products.

Fever thermometers are used in almost every household. The Bureau has established the official test methods and most of the specifications, and these are now incorporated in a commercial standard. Fever thermometers for household use generally are tested only by the manufacturer, but the tests are based on standards maintained for clinical thermometers used by the Federal Government. The Bureau renders an important nation-wide service to the consumer through the direct or indirect standardization of devices used in weighing or measuring commodities purchased by over-the-counter buyers. It promotes uniform action in weights and measures ad-ministration throughout the country and serves as a clearing house for information on the subject.

Glass for glazing doors and windows is usually either polished plate glass or so-called sheet glass. The first is characterized by its plane surfaces which do not distort reflected images and which eliminate distortion of objects when they are viewed through the glass at any angle. The second has a relatively smooth but characteristically wavy surface and objects viewed through sheet glass will be somewhat distorted, especially when the line of sight makes an acute angle with the glass surface.

It is quite probable that the quality of your raincoat depends upon tests made at the Bureau laboratories. One experiment in particular should interest you. It consists of a cycle of treatment of waterproofed fabrics, such as ducks and drills. Practically every conceivable condition of actual use is simulated, including light exposure, wetting and drying and crumpling.

When laundered cotton fabrics are dried outdoors during the winter, particularly in New England, they frequently undergo excessive deterioration of a type called “winter damage.” An investigation of the trouble in a Bureau laboratory showed that this was due to sulphuric acid formed in the damp fabric by oxidation of atmospheric sulphur dioxide and that the damage could be remedied by using a small amount of calcium carbonate in the final rinse water.

Women’s stocking have an annoying habit of wearing out or ripping at inconvenient times. Small wonder then that, at the request of the General Federation of Women’s Clubs, a hosiery testing machine has been developed at the Bureau. This simulates the forces acting on a stocking at the knee and at the places where garters grip the hosiery. It alternately pulls the stocking crosswise and lengthwise, just as if a lady were wearing it. After a few pulls a poor stocking will show runs and lose its shape. A good stocking will withstand many pulls.

If ever you visit the Bureau laboratories, by all means take a look at the remarkable shoe-testing machine. As the spokes of an enormous wheel, containing six shoes, turn, a pair of shoes presses and rubs against a moving belt. This wears and strains the upper leather, linings, stitches and heels of the shoe, just as if a person were wearing it. Within a short time a shoe has “walked” many miles on this machine.

The Bureau sometimes extends its research activities into the field of sports. It recently announced, for instance, that its measurements of the liveliness of the American and National League baseballs showed no difference of any practical significance. Some National League balls are more lively than some American League balls and some are less lively. There are slight variations in liveliness of balls of either league, just as there are slight variations in weight within the official limits of 5 to 5-1/4 ounces and slight variations in circumference within the official limits of 9 to 9-1/4 inches.

The laboratory apparatus used is an adaptation of a machine developed by the Carnegie Institute of Technology for measuring the liveliness of golf balls. It consists of an air gun which fires a wooden projectile representing the bat against the ball which is “teed” like a golf ball. The ball and projectile are caught in swinging pendulums which measure their speeds.

The gun was taken to the ball park and used as a robot batter to drive out home runs. It was easily possible to knock the ball over the fence. Numerous measurements of distance were made under the same conditions in so far as possible. The average distance was the same for the American and National League balls within one foot, namely 367 feet for the conditions used. Individual shots went from 320 to 410 feet, the exact distance being largely due to the effect of variable winds.

How’s the brake lining of your car? The brake testing machine automatically performs the following cycle of operations: the motor starts and accelerates the shaft, flywheel and brake drums to any desired speed up to 600 revolutions per minute (representing 60 miles an hour, car speed); the current is shut off and one of the brakes is applied, bringing the shaft to a stop in a certain time which is recorded automatically on a chart; a small motor turns a valve, cutting out the brake that has just functioned and connects the other to the line; the main motor starts again accelerates the shaft as before, the current is shut off, the second brake is applied and the time to stop is recorded as before. This cycle is repeated automatically at any desired interval (usually once a minute) for as long as necessary.

Within the past three years X-ray voltages have been more than doubled, there being several dozen X-ray plants in this country operating at 400,000 volts and some half dozen at voltages from 600,000 to 1,200,000. With this increase in voltage, entirely new measurement problems have arisen, the solution of which is awaited before these new radiations can be safely utilized to their ultimate limit. To meet this demand the Bureau has recently installed a 500,000-volt X-ray plant to provide a starting point on the problem, although it is generally recognized that they must ultimately have at least twice that voltage to keep abreast of the clinical demand for X-ray standards. Bureau measurements up to 400,000 volts have been carried out and it appears possible for the first time in history to standardize accurate dosage up to these limits.

Recently the Bureau announced an improvement in the system, of radio airplane landing aids first introduced by the Bureau to aviation back in 1931. This improvement brings the system in line with modern requirements and greatly increases its flexibility. The Bureau’s system differs from other instrument landing systems in that it provides positive guidance of the airplane in the vertical as well as in the horizontal plane down to the point of contact with the airport runway. Guidance in the vertical plane is accomplished by means of a radio landing beam, produced by an ultrashort wave transmitter located at one end of the airport. The airplane, approaching from beyond the other end of the airport, follows a curved beam to the airport surface.

In this country experimental installations made at College Park, Md., Newark, N. J., and Oakland, Calif., have demonstrated the possibilities of the system. Literally thousands of “blind” landings in airplanes provided with hooded cockpits have been made. Two of the nation’s leading airplanes are today studying improvements in the system” with a view to fitting it to the needs of large passenger planes.