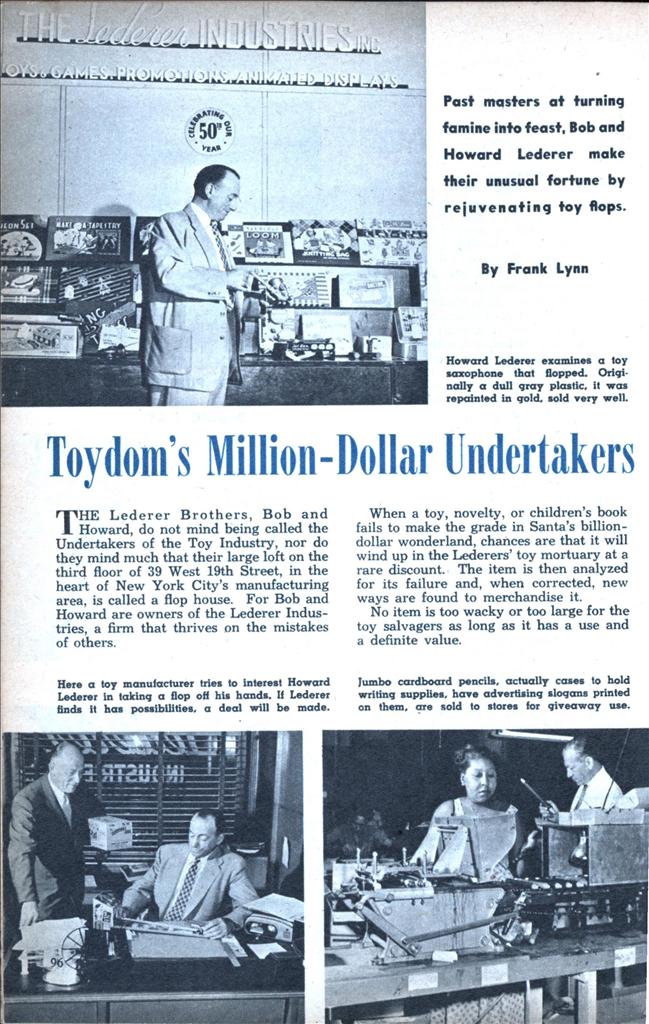 Past masters at turning famine into feast. Bob and Howard Lederer make their unusual fortune by rejuvenating toy flops.

THE Lederer Brothers, Bob and Howard, do not mind being called the Undertakers of the Toy Industry, nor do they mind much that their large loft on the third floor of 39 West 19th Street, in the heart of New York City’s manufacturing area, is called a flop house. For Bob and Howard are owners of the Lederer Industries, a firm that thrives on the mistakes of others.

When a toy, novelty, or children’s book fails to make the grade in Santa’s billion-dollar wonderland, chances are that it will wind up in the Lederers’ toy mortuary at a rare discount. The item is then analyzed for its failure and, when corrected, new ways are found to merchandise it.

No item is too wacky or too large for the toy salvagers as long as it has a use and a definite value.

Last year they handled such sundry items as 100,000 dull gray saxophones, half-a-million Hopalong Cassidy multi-colored lithographed jiggle cards, a million assorted comic books, 50,000 cute cuddly dolls whose “flesh” had turned yellow, and some 250,000 secret writing pads on which messages can be written with invisible ink and decoded with a messy liquid potion.

These items, and countless others, were resold for advertising use and giveaways to bakers, butchers, shoe stores, jewelers and department stores. Merchants discovered long ago that by giving junior a free pencil box or useful plaything costing less than a dime, they could attract more parents to their stores.

Many department stores also stimulate off-season business in various departments by promoting special toy sales. As an example, one California store periodically offers the public $1.00 to $3.00 values for only $.88 per item. The bulk of these underpriced novelties comes from the Lederer “flop house.”

The firm also gift-wraps about 3,000,000 surprise packages each year and an equal number of grab bags which are given away by department store Santas at Christmas time.

Howard Lederer pointed to a large display of toys in his office and explained: “All these toys flopped for one reason or another. A few were too fantastic even for the fertile imagination of our modern smart youngsters. Others were just plain over priced, and still others were overruns. Here’s an item, for instance, that fooled one of the shrewdest toy manufacturers in the business,” said Howard as he showed us a plastic spaceship set.

It seems that early in the Spring of 1952 an enthusiastic toy tycoon retooled his plant at a great cost to produce miniature spaceships. To enhance the package, he consummated a deal to use the likeness and name of Captain Video, a TV Space Man, who wields untold influence over the nation’s space-happy kids. The magic of Captain Video’s name on each set was expected to set the toy world on fire.

By the time Christmas rolled around, the toy tycoon was in a sweat. Captain Video and his spaceship toppled to earth and flopped into the waiting arms of Bob and Howard Lederer.

Why did this set flop? Howard explains it this way: “Give a kid a couple of six-shooters and a western outfit and he can have all kinds of fun chasing other buckaroos or bad men. But take this miniature spaceship set Why do kids dislike it? Because they can’t get into a spaceship and ride it in any simulated action that would zoom them to other planets.”

How did the flop brokers correct the mistake? They simply broke up the thousands of sets, gift-wrapped each of the spaceships, and sold them to premium users as individual giveaways.

One of the biggest problems of the Lederers is finding buyers for some of their’ weird duds and surplus goods. Last year, for instance, the firm purchased about 50,000 surplus M-1 U. S. Government eye-shields. Toy buyers didn’t seem to cotton to the item, nor did the specialty stores. For a while it appeared as though the flop brokers would be stuck with a dud. Then, __ one day, brother Bob examined one of the eyeshields and noticed that it had a rather wide plastic band on top of the glasses suitable for an advertising message. He made up a sample and, after an exhaustive show- ing to prospective customers, he finally disposed of more than half of the stock at three-and-a-half cents per item. Originally, they cost Uncle Sam sixteen cents each. A few months later the balance of the stock was unloaded to a merchandise speculator at a penny-and-a-half per item. Later the Lederers learned, to their amazement, that the speculator had resold the eyeshields to Uncle Sam at sixteen cents apiece.

“There’s a market for everything,” mused Howard, “but the trick is to find it. Hardly anything we buy ever goes unsold. Once, we bought 100,000 plastic wedding bands; 200,000 old jig-saw puzzles, and also a million lollypops.

“How did we unload these burdens? Well, we dug up a prize candy manufacturer who took the rings off our hands and found, to our surprise, that jig-saw puzzles were the rage in South Africa. Then we found a vending machine outfit who was happy to get the lollypops.”

The brothers’ late father started the Lederer Industries 50 years ago as an advertising novelty house. When Bob and Howard got out of school they joined the firm, and that’s when they- decided to branch out into the toy business. The first batch of toys imported from Germany failed to sell for one reason or another. Rather than unload them as distress goods, one of the brothers got the bright idea of gift-wrapping each toy and then selling them as surprise packages. When a sample was shown to a Sears, Roebuck toy buyer he liked the idea and, without hesitation.

Other firms asked for similar gift-wrapped surprise packages and grab bags and soon the Lederers found themselves in a new, novel business.

One of their sources for obtaining merchandise for surprise packages was in the distress merchandise field. They also took toys off the hands of manufacturers who had no warehousing facilities, and they frequently bought over-run merchandise at discounts.

As their surprise-package business boomed and their buying power increased, they subsequently contracted for the entire output of several toy factories on a yearly basis.

In addition, they developed a giant container in the shape of a pencil and filled it with pencils, a ruler, and an eraser, and included this item in grab bags. When they discovered that they could print an advertising message on the cardboard pencil holder, they began selling it as an advertising novelty. Today, the Lederers assemble and produce more than 200,000 pencil sets a week. Shoe stores and other merchants use them as giveaways to get the kids into their stores.

A few years ago, the Lederers acquired the German patent to a novelty called “The Burning of the Maine.” The idea of this chemically treated oblong sheet of paper was to light it with a burning cigarette and then watch the likeness of the Maine catch fire and “sink” into the deep. To make the novelty more appealing for American consumption, the Lederers renamed it the “Magic Race” and turned it into a horse race game. The suspense as to which horse would win, place, or show provided so much amusement for kids from six to 60 that the game soon became a national craze. Jockeys and horse trainers in particular found unlimited fun in these races that couldn’t be fixed.

Recently, a merchant mariner bought 1.000 race forms from Howard Lederer. A month later, he returned for another 1,000 and, several months later, he repeated the order. Curious, Howard asked the gob what he was doing with the novelty.

“Oh,” whispered the sailor, “I run these horse races aboard ship. I collect a dollar from each of six players and pay off five to the winner. I make a buck on each race!”

The Lederers estimate that this is by far their most cheaply priced novelty and they sell millions of them each year at less than a penny each.

Every now and then, young, frustrated toy makers will wind up with their unsalable products at the Lederer plant because they find that it’s a pleasure to do business with them.

Not long ago a young man who held a responsible position with a large department store found himself with a stock of 25,000 unsalable baby shoes. He showed a sample of the shoes to Howard and asked if he would take the lot off his hands. But the experienced, wise Howard would have nothing to do with the item mainly because the shoes had no play value whatsoever and last, but not least, the latex formed shoes gave off an odoriferous odor that would knock the stuffings out of any buyer with a quick sense of smell.

“Many flops in the toy and novelty field,” said Howard, “are due to the novice who doesn’t understand the needs of the market. An inventor has what looks like a natural. He spends all kinds of money, much of it borrowed. and then goes broke because his idea wasn’t suited to the needs of buyers.

“By and large, though, failures in the toy industry are the result of 90 per cent poor management and 10 per cent bad luck. Luck is a very important factor in the success of many toys and novelties.”

The Lederer boys advise new toy or novelty manufacturers to seek professional advice before embarking on a venture that may quickly bankrupt them. “Money can be made with toys and novelties,” said Howard, “but you’ve got to find a new twist in marketing them. Our twist is to capitalize on the failures of others.”