Update: Stannous points out in the comments that the kids on page 4 appear to be members of the Hitler Youth. 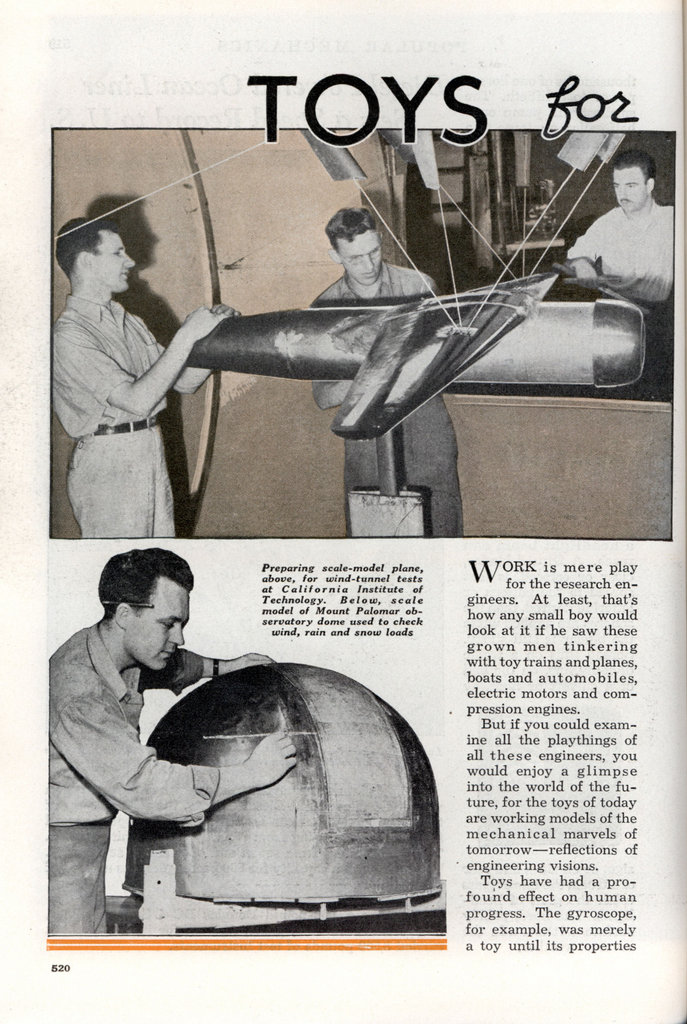 Toys for Men Only

WORK is mere play for the research engineers. At least, that’s how any small boy would look at it if he saw these grown men tinkering with toy trains and planes, boats and automobiles, electric motors and compression engines.

But if you could examine all the playthings of all these engineers, you would enjoy a glimpse into the world of the future, for the toys of today are working models of the mechanical marvels of tomorrowâ€”reflections of engineering visions.

Toys have had a profound effect on human progress. The gyroscope, for example, was merely a toy until its properties were applied. Then it grew up to fly airplanes and steer ocean liners. Boys sent electric trains dashing around toy tracks long before railroads used electric locomotives, and operated toy machines with miniature electric motors while the wheels of industry still were being turned by steam.

Today trains cling to the rails better, automobiles run more smoothly and planes travel faster partly because research men have learned valuable lessons from toys. Without working models, engineering and scientific progress in many fields would be retarded greatly because man still would be forced to learn by the costly process of trial and error.

When the modern engineer starts to design a new airplane, a new car or a new boat, he first evolves a plan which appears sound in theory, something which looks all right on paper.” Then he builds a working model and by experimenting with it he finds the “bugs” in his design before he constructs his plane or car or boat. Nothing is too big or too complicated to be duplicated in miniature. A model was built of Boulder dam and models have been constructed of whole watershed areas in studying flood-control projects.

Working models of complicated machines may cost hundreds or even thousands of dollars but they pay for themselves many times over by enabling engineers to discover their mistakes ahead of time. Models have enabled engineers to eliminate dangerous vibrations from machines. Waterwheel generators weighing thousands of tons have shaken themselves to destruction in the past because of self-induced vibrations, airplane wings have “fluttered” with an intensity which threatened to tear them from the fuselage and motors have felt the power of such vibrations in their bearings.

The engineers used to build machines, then try to eliminate whatever vibrations the machines developed. Now, with the aid of models, they eliminate the vibrations before they build. By calculating the small vibrations of a machine model, they can predict whether the actual machine will be susceptible to self-induced vibrations.

Another type of vibration has plagued the railroads, lateral pressure of wheel flanges against the rails which causes lateral derailments. By using a toy electric locomotive, a Westinghouse researcher was able to study the forces which cause lateral derailments. He ran the locomotive on two rollers at a top speed corresponding to ninety miles an hour for a full-size engine. By taking motion pictures of the toy he determined the oscillations at different speeds and eventually demonstrated with his toy that a modern electric locomotive can operate safely at a speed even greater than the highest for which it is designed. In testing new airplane shapes, wind-tunnel experiments with scale models not only reveal the best fuselage design but aid in determining the effectiveness of ailerons, rudders and other control surfaces, and in finding the forces required to operate these surfaces. Quite often, after learning how a scale model performs in the wind tunnel, and taking into consideration the amount of power which is to be used in the full-size plane, engineers can predict speed and other performance figures of a plane within one-half of one per cent â€”before the plane is built.

But airplanes are not the only models subjected to wind-tunnel tests. Architects use wind tunnels to test building models and thus learn in advance the effect of wind pressure on buildings during violent storms and cyclones. The latest models to be subjected to wind-tunnel tests are the various types of windmill vanes used in generating electric power from the wind on farms.

The effects of earthquakes on various types of buildings are also studied with models. The “earthquake” is produced by a quick-acting piston which shakes a table on which the models are mounted. There are models of coal mines where engineering problems can be worked out before ground is broken for a shaft, and there are models, too, of rivers, beaches and oceans for studying navigation and flood-control problems. Even lightning is produced in the laboratory in model form to study its effect on buildings.

One of the most difficult models ever attempted was that of the supports for the 200-inch telescope being constructed on Mount Palomar in California. Here Westinghouse engineers were called upon to build a miniature of something so unusual that no one had ever seen it or anything like it. It was decided to make the mounting in the form of a huge hollow yoke which would be welded into a single piece and to float the mounting in oil under pressure to prevent vibration. But not a piece of metal could be machined until it was determined just how the telescope would operate.

So the engineers began building models. One after another was constructed and discarded. Finally a satisfactory model was constructed of celluloid. To measure the tiny movements of the celluloid parts an electrified micrometer connected to a bell was used so the builders could tell the instant the micrometer screw touched a part being measured. The celluloid pieces were actually welded into place just as their larger counterparts are to be welded, but the “welding” was done with acetone. Experiments with celluloid models have solved many welding problems, incidentally, because celluloid warps like steel as a result of heating and cooling. For this reason, and because it is transparent, mod-els of steam turbines often are made of celluloid. Engineers can watch the operation of moving parts in celluloid turbine models and the behavior of celluloid when supporting a weight can be translated into the behavior of a full-size turbine. Recently a celluloid model of a propeller-type blower was operated at a speed of 6,000 revolutions per minute. By studying the model, engineers determined the capacity, rate of flow of air and other characteristics of the real machine before it was built.

At the Westinghouse plant in East Pittsburgh, a $550,000 flood-control system of steel gates and pumps has been erected to keep the flood waters of a creek from backing up a valley. Before a shovelful of dirt was turned, the builders knew just how much water could be pumped through three tunnels around the sides of the flood gates because they had built a model and pumped water through it.

The robot or mechanical man is a laboratory scarecrow turned out by the research engineers when they want to demonstrate dramatically some of their devices which perform difficult or tedious jobs better than humans. Dressed to simulate the actions and appearance of a man, such a robot may sing, talk after a fashion, answer the telephone, smoke, laugh, cry and perform other amazing feats.

Such a toy is Willie Vocalite, a sturdy metal man born in a Westinghouse research laboratory. Willie can taste with an “electric palate,” talk, smoke and, when spoken to, will get up out of his chair. His voice and actions are controlled by photoelectric tubes while his taster is an “elec-trynx,” so sensitive that it records the acidity of fruits by registering the action of one-millionth of an ampere. That’s about one-tenth the “wing power” of a house fly.

The latest toy to attract attention in many laboratories is a tiny sun-driven motor, the electromotive power being supplied by four very sensitive photoelectric cells. Their light-sensitive surfaces are covered by a film of platinum so thin as to be semi-transparent. This film increases the cell’s sensitivity to light. The cells convert light energy directly into electric energy and the motor, with jewel bearings, is connected directly to the cells. The speed at which the motor turns depends on the amount of light the cells receive. Direct sunlight whirls the motor at about 400 revolutions per minute. As yet, no practical application has been found for the sun-driven motor which is rated at about four ten-millionths of a horsepower, a bit less than one flea-power.

Another laboratory toy which has not yet been put to work is the radiometer. It has four small vanes balanced on a jeweled pivot in a partly evacuated bulb. One side of each vane is polished and the other is black, the black side of one vane facing the polished side of the next. When heat rays from the sun or some artificial source fall on the vanes, they move in the direction of the polished sides.

Perhaps some day ways will be found to produce large amounts of power by applying the principles of the sun-driven motor or the radiometer. Then two more toys will grow up and go to workâ€”and we shall get power direct from the sun!