Modern Mechanix
Issue: Jan, 1931
Posted in: Toys and Games
Tags: christmas, how its made
2 Comments on Toys Keep Pace With Children’s Tastes (Jan, 1931) 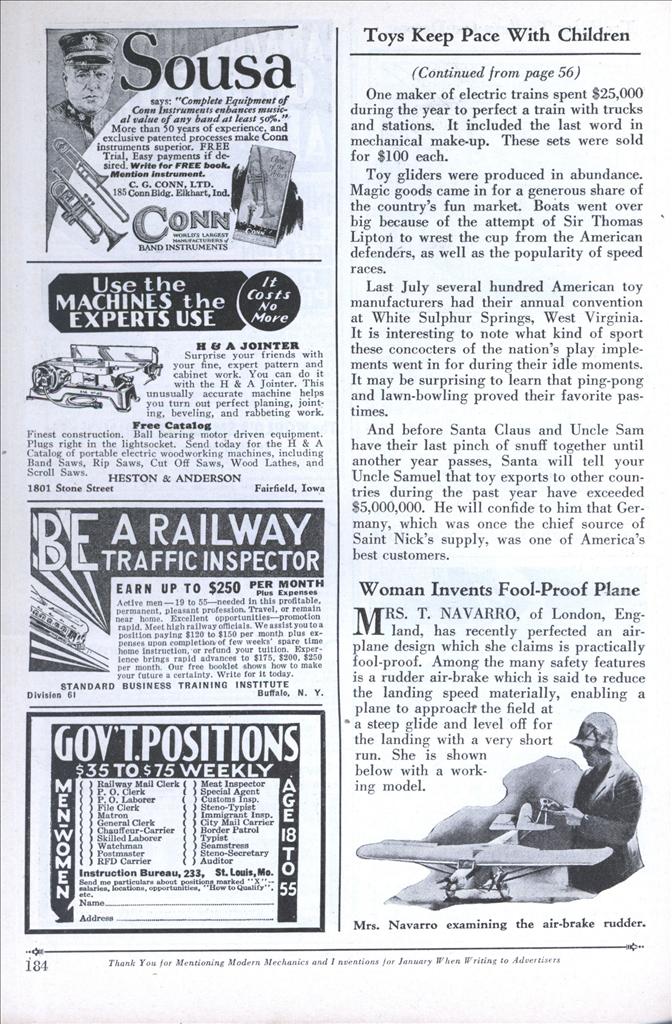 A YOUNG father of a two-year-old youngster, noticing the eagerness of his offspring to lay hands on something with wheels on it in which he could move about, sat down one evening in his basement workshop and knocked together that simple mechanism of juvenile locomotion known to millions as the kiddie-kar. Observing the popularity of the toy with children of the neighborhood, the father concluded that it would be a good idea to manufacture the cars on a commercial scale.

He was right. It was a good idea—good enough to set him on the path to financial independence. Today his invention is produced by the thousands, and this Christmas Santa Claus will slide down an unguessable number of chimneys on a kiddie-kar. That’s the way the business of manufacturing toys is conducted today—on the same efficient, large-scale production methods that characterize the automobile and other industries. Nevertheless, making toys is different. You can’t divest the business of all sentiment, for though dolls can be turned out by the million, the men who make them can’t help remembering that each puppet of plaster and composition will some day be the well-loved toy of some little girl.

When is an article a toy? What is the appeal of toys? Do they have any effect on shaping the lives of the youngsters who own them? And what are the most popular varieties?

A recent report issued by the Bureau of the Census leaves no room for doubt as to the most popular toys. Those with wheels lead all others by a big margin. This is quite to be expected, for Young America is just as much interested in mechanical means of getting about as the older generation. Wagons, scooters, toy automobiles, velocipedes, and bicycles are “best sellers.”

Dolls are always popular, but a significant feature of this part of the industry is that, although the value of manufactured dolls decreased last year, there was a substantial increase in the sale of doll clothes. This is a reflection of the keen interest of teen-age femininity in the all-important subject of dress. When the modern little girl grows up she’ll know all about Paris gowns, and the art of dressing will be an open book to her.

Santa Claus’ toy headquarters in America incorporates about five square blocks in the business section of New York’s Gramercy Square district. For example, at 200 Fifth Avenue there are over 40 toy manufacturers, each turning out a different product. Each represents investments of thousands of dollars. Before any of these manufacturers launches a new toy on the market, he knows pretty well whether it will be popular or not, though here, as in other industries, it Is impossible to predict when some toy will strike a popular fancy and develop in-;o a fad. Witness the recent rise to fame of the yo-yo top, which proved as big a bonanza to manufacturers as the mah jong craze of well-remembered popularity.

Two years ago when Zeppelin flights stirred up the world, with the feats being glorified in pictures and in newspaper stories, Ferdinand Strauss, one of the foremost American makers of toys, seized upon the idea of turning out a toy Zeppelin. It proved the toy sensation of the year.

This last summer saw spectacular growth ¦ in popularity of outdoor miniature golf. The craze swept over the country like wildfire. Instantly toy manufacturers designed still smaller sets for children. Santa Claus has looked these half-pint sized golf courses over and from all indications his sleighs will be bulging with them.

It is all in the psychology of the thing. Before a toy manufacturer or inventor sets forth to produce a certain article, he makes a study of the popularity of the subject after which his commodity is going to be patterned. He knows that children are inculcated with an insurmountable superiority complex.

He knows that every child, on reaching the age of rudimentary understanding, aspires to emulate heroes, performers of great deeds. It is innate, as established and as certain as the moon and sun. He knows that the ego in children asserts itself vitally in the face of other children and before their elders. The qualities of child psychology are thoroughly understood by the man who decides to invest in a certain toy, which means special factory equipment which will be useless for any other project in the event that his calculations are wrong.

In the toy mechanical refrigerators which have been turned out by the thousands this year one sees the workings of the child’s mind, attracting it to this object, rather clearly. A little girl watches her mother at work around the refrigerator. The child is baffled by its operation and yet craves to imitate her mother who is grown up and capable of handling the icebox.

Horace E. Boucher, one New York model and toy manufacturer, says: “It is the realism which is reflected in the toy which makes it a success for the child. Without its realistic qualities it would be useless. It is only in recent months that a genu- – ine appreciation has been felt by the toy manufacturers of the country of the lack of benefits of toys to boys.

“When a girl has gone through the cycle of her toys, she usually has a thorough course in domestic science. She has her dolls which teach her various matters about dress and hygiene. She has her toy-house which instructs her in cooking and caring for the home.

“But up to a comparatively recent day boys have been burdened with fantastic toys, adding little to their education. I cannot imagine anything more preposterous than a train with wings or an ambulance with a clown at the driver’s wheel. Yet that has been the trend of the boys’ playthings. Many great men can trace their profession to toy hobbies.

“I am of the Pestalozzi school. That Swiss genius was able to combine the teaching of various principles with play. Only a short time ago I turned out one of the most unique toys of my career. The Oklahoma State Department of Health asked me to make for them a train which would illustrate the science of health.

“For the locomotive parts I had miniature tooth-brushes and tooth-paste. The boiler was made of soap. In it was water. The first car represented a loaf of bread. The second certain meats. The third illustrated certain vegetables. The last car in this line of health stood for sleep. The whole apparatus showed how a healthy program would function.”

A survey of the toy industry shows that the talking pictures and their popularity brought about a big demand for miniature movie machines. The Eastman Kodak Company put Kodatoy on the market for Santa Claus and his citizens. It is a movie projector throwing pictures on its own silver screen.

Even the radio has contributed its bit to the toy industry. Amos and Andy created a market not only for their own figures in miniature, but also of their rickety taxicab, the main asset of the Fresh Air Taxicab Company, Incorpolated. Those articles brought the toy-makers nearly $500,000.

Noise still holds a thrill for the youngster, the toy-men say. St. Nick had a big variety to choose from this year. Aside from drums and whistles, he found an assortment of twisty clicks, frog crickets, scream whistles, rattlers and the good old standby, the kazoo. Tin horns and cornets and accordions were also plentiful for the musically inclined.

Despite the inroads made by the various new toys appearing on the scene this year, Kris Kringle will find that the dolls and trains were in greatest demand. In the Gramercy Square section there was loft after loft full of these two playthings just as the Christmas spirit began to make itself felt. Even airplanes, the manufacturers’ records showed, did not begin to come up to these in popularity.

One maker of electric trains spent $25,000 during the year to perfect a train with trucks and stations. It included the last word in mechanical make-up. These sets were sold for $100 each.

Toy gliders were produced in abundance. Magic goods came in for a generous share of the country’s fun market. Boats went over big because of the attempt of Sir Thomas Lipton to wrest the cup from the American defenders, as well as the popularity of speed races.

Last July several hundred American toy manufacturers had their annual convention at White Sulphur Springs, West Virginia. It is interesting to note what kind of sport these concocters of the nation’s play implements went in for during their idle moments. It may be surprising to learn that ping-pong and lawn-bowling proved their favorite pastimes.

And before Santa Claus and Uncle Sam have their last pinch of snuff together until another year passes, Santa will tell your Uncle Samuel that toy exports to other countries during the past year have exceeded $5,000,000. He will confide to him that Germany, which was once the chief source of Saint Nick’s supply, was one of America’s best customers.