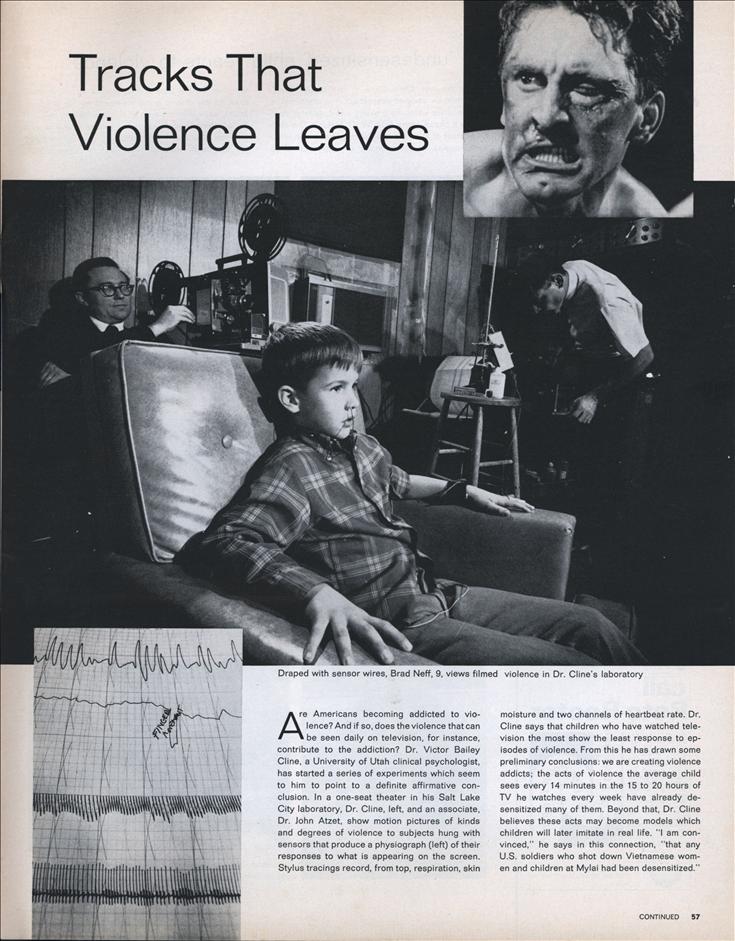 Are Americans becoming addicted to violence? And if so, does the violence that can be seen daily on television, for instance, contribute to the addiction? Dr. Victor Bailey Cline, a University of Utah clinical psychologist, has started a series of experiments which seem to him to point to a definite affirmative conclusion. In a one-seat theater in his Salt Lake City laboratory, Dr. Cline, left, and an associate, Dr. John Atzet, show motion pictures of kinds and degrees of violence to subjects hung with sensors that produce a physiograph (left) of their responses to what is appearing on the screen. Stylus tracings record, from top, respiration, skin moisture and two channels of heartbeat rate. Dr. Cline says that children who have watched television the most show the least response to episodes of violence. From this he has drawn some preliminary conclusions: we are creating violence addicts; the acts of violence the average child sees every 14 minutes in the 15 to 20 hours of TV he watches every week have already desensitized many of them. Beyond that, Dr. Cline believes these acts may become models which children will later imitate in real life. “I am convinced,” he says in this connection, “that any U.S. soldiers who shot down Vietnamese women and children at Mylai had been desensitized.”

Taking the test, Chris Cline, 9, one of Dr. Cline’s eight children, showed interest but little emotional response while watching a skiing short, greater reaction to a chase scene from W. C. Fields’s The Bank Dick, most of all to a brutal prizefight scene in which Kirk Douglas is battered in The Champion. Dr. Cline, who has a hard time finding non-TV-watching children for the control group he needs for his ongoing study, says that children should be limited in their TV watching (his are restricted to one hour a week) and that “General” movie ratings should be withheld for too much violence, not just for pornography.