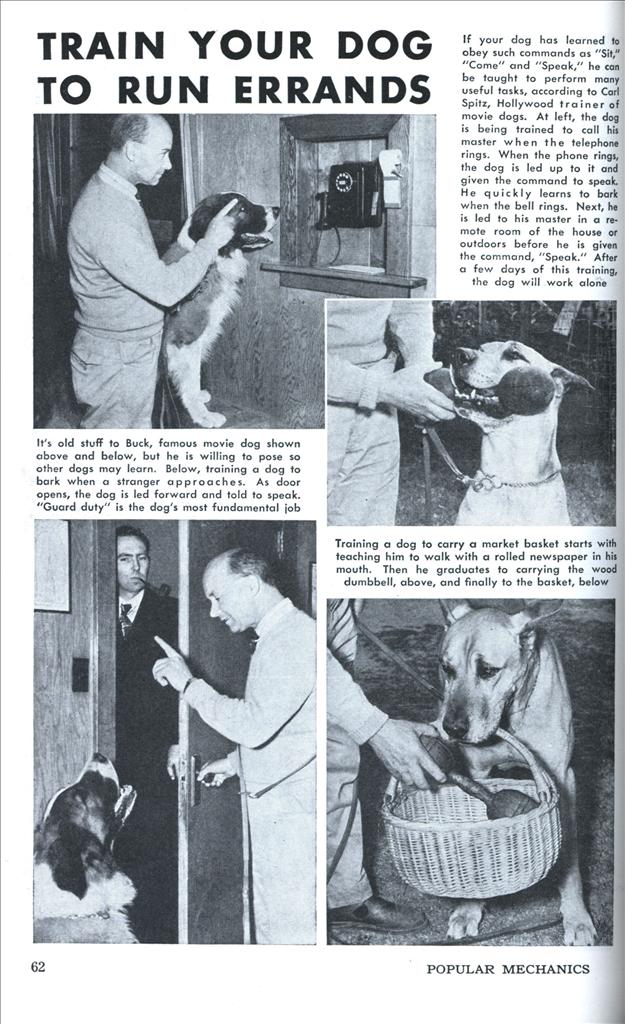 TRAIN YOUR DOG TO RUN ERRANDS

It’s old stuff to Buck, famous movie dog shown above and below, but he is willing to pose so other dogs may learn. Below, training a dog to bark when a stranger approaches. As door opens, the dog is led forward and told to speak. “Guard duty” is the dog’s most fundamental job.

If your dog has learned to obey such commands as “Sit “Come” and “Speak,” he can be taught to perform many useful tasks, according to Carl Spitz, Hollywood trainer of movie dogs. At left, the dog is being trained to call his master when the telephone rings. When the phone rings, the dog is led up to it and given the command to speak. He quickly learns to bark when the bell rings. Next, he is led to his master in a remote room of the house or outdoors before he is given the command, “Speak.” After a few days of this training, the dog will work alone.

Training a dog to carry a market basket starts with teaching him to walk with a rolled newspaper in his mouth. Then he graduates to carrying the wood dumbbell, above, and finally to the basket, below.

Any dog weighing more than 75 pounds can be taught to pull a small cart or wagon in harness. First teach him to pull an empty box with a rope held in his teeth to overcome fear of an object tied to him. Then harness the dog to a small platform or a sled (below) that will not tip over easily. After he has learned to pull the platform, weights can be placed on it gradually. He will offer no objections when a dogcart or wagon is substituted for the platform.