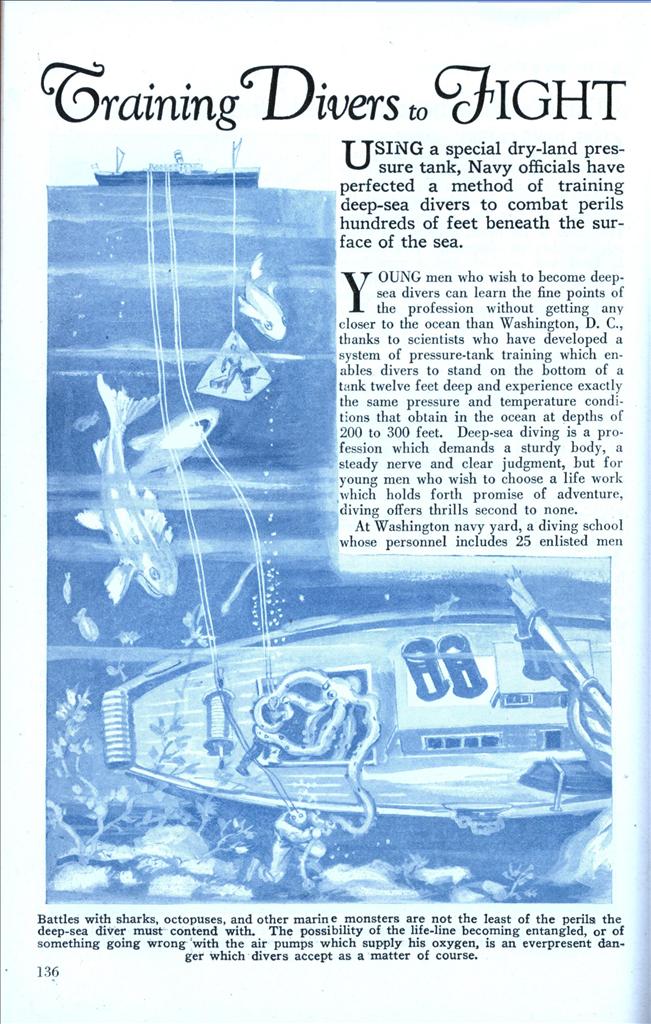 USING a special dry-land pressure tank, Navy officials have perfected a method of training deep-sea divers to combat perils hundreds of feet beneath the surface of the sea.

YOUNG men who wish to become deep-sea divers can learn the fine points of the profession without getting any closer to the ocean than Washington, D. C, thanks to scientists who have developed a system of pressure-tank training which enables divers to stand on the bottom of a tank twelve feet deep and experience exactly the same pressure and temperature conditions that obtain in the ocean at depths of 200 to 300 feet. Deep-sea diving is a profession which demands a sturdy body, a steady nerve and clear judgment, but for young men who wish to choose a life work which holds forth promise of adventure, diving offers thrills second to none.

At Washington navy yard, a diving school whose personnel includes 25 enlisted men and 6 officers is now in session. Tyros are converted into skilled divers in the short period of six months. Furthermore, these newly trained divers understand thoroughly the perils that they must encounter under the surface sooner or later, and they are taught just how to protect themselves when danger threatens.

The green divers of the U. S. Navy descend to depths of 150 to 200 feet or more in a tank only 12 feet high and 8 feet in diameter, containing some 8,000 gallons of water. By the use of compressed air, underwater conditions are simulated in this tank. Beginners master diving secrets in the tank without danger to life and limb such as they would experience if “learning their trade” in salt water. Such menaces as the octopus, deep-sea monsters and other marine menaces are eliminated from this training school program.

One former impediment was the extreme difficulty of breathing satisfactorily for long intervals at points far below the surface. Experiments with the diving chamber have resulted in the perfection of new combinations of synthetic atmosphere. Helium gas has been introduced most successfully in these mixtures. As a result, Chief Gunner W. F. Loughman has made a successful descent to a point 306 feet below the ocean surface—and remained there 20 minutes. In another test, this same diver performed important salvage work on a sunken ship at a depth of 265 feet.

In the experimental tank at Washington, one expert diver working under simulated sea conditions has attained a depth of 355 feet and has remained there for one-half a minute. This is the deepest dive ever made. The pressure to which this daring diver was exposed was stupendous—sufficient to crush to atoms some of the strongest buildings built by man.

An additional atmosphere of pressure equivalent to 14.7 pounds per square inch developed in the diving tank by compressed air control exerts similar pressure on the diver as though he had descended another 33 feet. In raising the trainees to the surface of the tank after their experimental dives, care is exercised in gradually decreasing the pressure as where this is done hurriedly, caisson sickness is liable to develop.

If you are familiar with the precarious occupation of the professional diver, you have, unquestionably, heard about men who have suffered from “bends” or caisson sickness. The extreme pressures of deep sea diving, if reduced abruptly, leave bubbles of nitrogen in the blood vessels, tissues and body fluids. If these bubbles penetrate to the spinal cord or brain, death or paralysis generally results. The associates of the deep sea divers are extremely cautious in raising their mates from the vicinity of the ocean floor after deep descents.

However, when the sea is rough and the waves are “bumpy,” there is a liability that the diver may suffer severe ear injury or total loss of hearing. Helium gas is particularly important in such “decompression” for it is inert and absorbs the nitrogen bubbles readily.

Science has perfected the efficient decompression chamber known popularly as the “iron doctor” among the diving fraternity. This is a large cylinder of iron and steel with two compartments and various control doors and gauges in which the divers who suffer caisson sickness are treated in order to eliminate the nitrogen bubbles from their systems. Pressure is artificially applied within the tank to simulate the gradually diminishing pressure of a slow ascent to the surface.

During the era not so long ago when 200 foot dives were championship feats, the mill-run of divers customarily suffered nausea attacks in one dive out of ten. The provision of better equipment, the use of helium gas in the airlines and similar precautions have reduced this record to one case of illness in 50 dives. The experimental research and standardized training for naval divers fostered by Uncle Sam promises to further curtail this form of diving illness. Potentially, it may even be stamped permanently from the deep sea diving picture.

The U. S. Navy will train 62 men and officers annually for deep diving and subsequently will station them at strategic points along the coast. They will be ready constantly for emergency calls—to aid in the salvage of sunken ships and submarines and the succor of those endangered in such wrecks. They will also be available for routine underwater service at naval stations and in the repair and maintenance of our national fleet. Special boats used by these divers will be equipped with the all-important decompression chambers and other demonstrated accessories of comparable utility. The use of synthetic atmosphere in this decompression chamber reduces the treatment period from one-fourth to one-third over the time required where ordinary air is used. Furthermore, the use of helium gas in the diving airlines has practically doubled the time in which the divers can remain at work in the salt sea at perilous depths.

Whenever a group of naval divers are commissioned to aid in the salvage of a sunken ship, each man aspires to find and bring to the surface the signal bell of the waterlogged craft. It is the badge of honor —the coveted prize which proves the superiority of its discoverer over his mates. The rivalry is friendly and results in submarine sport and byplay which lends spice to arduous and hazardous labor at the bottom of the sea.

The diver must be expert in various repair activities such as the adjustment of marine machinery, electric torch work and related tasks. Even though skilled highly in such work, his efforts are hampered when buried under a blanket of salt water 150 to 200 feet deep so that his efficiency is only one-sixth of what it would be on land. The U. S. Navy through its remarkable instruction courses seeks to make the average diver more proficient than formerly and to educate him so that he will be qualified to make good in every emergency.

Five compressors whose individual capacity ranges from 50 to 75 cubic feet of air per minute are installed at the Washington Navy Yard.